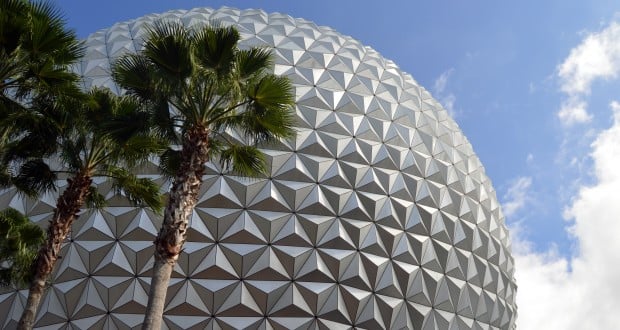 Guests who visit Walt Disney World on a Disney vacation love to spend lots of time in Epcot. The park celebrates the unity of technology, nature, and culture with attractions, restaurants, entertainment, and shopping for all guests to enjoy. Guests who spend time in Epcot can enjoy Future World which features cutting edge technology and an appreciation of nature and World Showcase which highlight eleven different countries from around the world. While exploring Epcot guests can dive into the seas, blast off into space, travel the world, travel back in time and design their own cars. With so many amazing experiences to be had, guests sometimes get caught up in hurrying to see it all and overlook some amazing details and facts about Epcot. Here are ten stunning facts about Epcot that guests might not have known!

One of the most recognized attractions in all of Walt Disney World is Spaceship Earth which can be found just inside the main entrance of Epcot. Housed in a giant geodesic sphere, the attraction brings guests from the beginning of time to modern day to celebrate the history and development of communication. The outside of the sphere is covered in thousands of silver triangles which help to make the structure look futuristic and fit in perfectly in Future World. Many guests might not know that there are actually 11,324 individual triangles on Spaceship Earth!

The Seas with Nemo and Friends Pavilion in Future World invites guests to dive into the sea and relive the classic Pixar tale Finding Nemo. After enjoying an attraction of the same name as the pavilion guests can explore exhibits with sea creatures and learn all about the ocean and its inhabitants. The aquarium found in The Seas is very large, but many guests don’t realize that it is so massive Spaceship Earth could fit inside of it!

Spaceship Earth features many different scenes depicting important moments in history like the Renaissance, Rome burning, man landing on the moon, and Ancient Egypt. Each scene features several audio-animatronics, meaning that dozens are used throughout the length of the attraction. Since Imagineers needed so many animatronics for Spaceship Earth, they looked to molds already made for the Hall of Presidents in the Magic Kingdom resulting in some familiar faces. Guests who experience Spaceship Earth should look for James Buchanan as Gutenberg, William Taft as an Egyptian, Teddy Roosevelt as a Roman, and John Adams as a monk.

Guests who are brave enough for deep space exploration can enjoy Mission: SPACE which invites guests into the International Space Training Center to train for the first ever mission to Mars. Before entering the pre-show area of the attraction, guests pass through an indoor area of the queue which features massive props used in space exploration and travel. On the right hand wall of the room is a massive rotating wheel which features a familiar symbol in the middle. Guests might recognize the symbol as the original one used for the attraction Horizons which used to occupy the same spot that Mission: SPACE currently does.

5. The Fountain Of Nations

Located in the plaza behind Spaceship Earth is a massive fountain with a beautiful story. The Fountain of Nations features a wonderful show with music and dancing water several times an hour and many guests might not know the significance behind its name. Shortly after Epcot opened in 1982, a dedication ceremony was held for the Fountain of Nations and water from twenty five different sources around the world were ceremoniously added to create a unified body of water.

Guests who visit World Showcase should definitely take their time exploring the eleven different countries including China, Morocco, and Italy. Guests who stop in the France Pavilion can feel as though they are walking the charming streets of Paris and can stop to enjoy the wonderful film Impressions de France. The female Cast Members who work at Impressions de France wear costumes inspired by Edouard Manet’s painting “A Bar at the Folies.”

The France Pavilion in World Showcase also features a beautiful view of the Eiffel Tower looming over the buildings in the distance. Guests might appreciate how authentic the Eiffel Tower looks, but not realize why it came out so perfectly. Disney actually used the blueprints created by Gustave Eiffel, just at one tenth the size for the perfect Eiffel Tower!

The China Pavilion is one of the most intricately decorated in World Showcase as it is full of amazing small details and beautiful artwork. Guests who walk past the Nine Dragons Restaurant should look up to the roof to appreciate beautiful architecture including a small man surrounded by animals. The man is meant to represent Prince Min, a cruel ancient ruler who was hung for his crimes. Chinese tradition calls for a representation of Prince Min being guarded by spiritual animals as a warning to other tyrants and cruel leaders.

Future World is home to Journey Into Imagination with Figment which invites guests into the Imagination Institute for a whirlwind tour of their sensory labs. Figment soon takes the tour in a different direction and shows guests just how fun imagination can be. The original version of the attraction featured Figment and his friend Dreamfinder who traveled around the world collecting imagination. When the attraction was refurbished and retitled, Dreamfinder was left behind but a tribute to him can still be found today. Guests enjoying the attraction should be on the lookout for a door marked Dean Finder, a subtle tribute to an old friend.