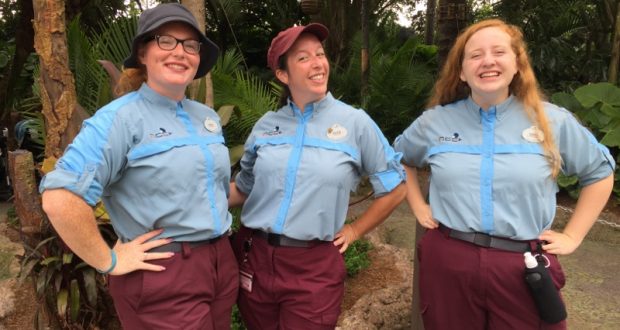 Most people who love Walt Disney World daydream about working there someday. Cast Members work hard, but most of them will tell you that it is worth it. There are plenty of benefits to working at Walt Disney World. Here are ten reasons why those jobs are better than your job.

If your job has a dress code, you probably spend a fair amount of money on clothes. Many businesses that require uniforms also require the employees to purchase those uniforms with their own money. That is not the case at Walt Disney World. The Cast Members do not have to pay for their costumes, they are provided for them, which saves them money.

9) Make Friends From Around the World

People from all over the world work at Walt Disney World, so Cast Members have a chance to make international friendships. It’s easy to learn about other countries and cultures when they are working side by side with someone who grew up across the planet.

Who wouldn’t want to brag to family and friends that they work at “the most magical place on Earth”? If someone works at Walt Disney World, their friends will be jealous. No matter what position they hold, it will seem way cooler than what their friends do. Unfortunately, some old friends might suddenly come out of the woodwork and expect to get free tickets, but the Cast Members can just ignore that and add more pictures to their favorite social media accounts.

Everyone needs to get away and relax from time to time, even Walt Disney World Cast Members. That is what Mickey’s Retreat is all about. It’s a park for Cast Members and their families. There are swimming pools, affordable boat rentals, a playground, and a banquet room. Cast Members can play tennis, basketball, or volleyball, or they can relax in the sun for a little while. Mickey’s Retreat gives those who create the magic a chance to enjoy some of it themselves.

Cast Members receive a lot of discounts. There are merchandise discounts, food discounts, and room discounts. They will pay less for a Disney Cruise or a hotel room if they decide to take a trip to Anaheim. There are also discounts provided by some businesses in the area. Some of the discounts are substantial.

Disney Cast Members never have to worry about having friends, because they receive free tickets. This can be both a blessing and a curse, because they will often have people they don’t know well ask them for their tickets. The tickets are great, though, if the Cast Member wants family to visit from out of town, or if they want to take their kids and some friends to a park for the day. Grandparents working at Disney especially love it because they can enjoy quality time with their grandchildren, without paying for tickets.

Cast Members will experience new rides and attractions before anyone else. When Seven Dwarfs Mine Train opened, the Cast Members were allowed to ride well before the soft openings. With all the rumors of changes, who wouldn’t want to be one of the first to ride something new? Cast Members will have that opportunity.

Without the Cast Members, Walt Disney World would not be the most magical place on the planet. They are responsible for creating the magic for thousands of people each day. They make other people’s dreams come true. Every job is important, and each Cast Member realizes that they need to do their part in making your vacation special. The next time you’re at Walt Disney World, thank the Cast Members for all that they do. It is their goal to make sure that you and your party have the best vacation ever.

2015-08-12
PaulaK
Previous: 9 Things You Will Love About Teppan Edo
Next: 14 Things You Probably Hadn’t Thought To Pack In Your Park Bag