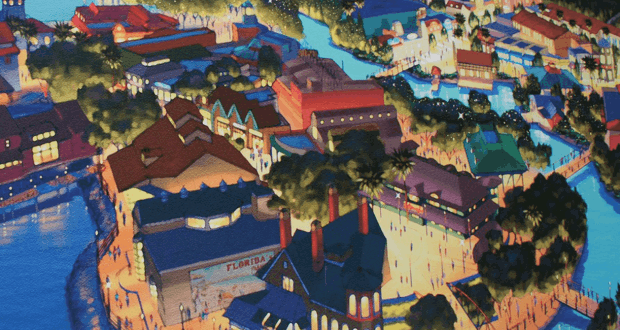 When you head to the most magical place on earth, you’ll no doubt notice some areas under construction from time to time – there are always new attractions on the horizon. Even when Disney is working on a new area or refurbishing an older area, they make sure that whatever they are working on stays a well-kept secret from visitors. That doesn’t mean that we don’t hear rumours from time to time of what’s new and exciting and coming to a Disney park soon!

This is the one park that we know is going to have a lot of changes coming up, but we sadly don’t know many specifics. The only thing we do know for sure so far is that a brand new theatre is going to be built down on Sunset Boulevard. We will have to speculate a little longer, though, as to what will be in it.

Magic Kingdom has recently seen the largest park upgrade ever in Walt Disney World history, with the addition of the new Fantasyland section. So it’s no surprise that this park doesn’t have a lot of news coming out of it at the moment. That being said, lately Disney has been working to increase the number of table service restaurants in this park, with predictably amazing results. The new Be Our Guest restaurant is extremely popular, with reservations almost impossible to secure. So with news of a Jungle Cruise themed restaurant on the horizon, people have already been chomping at the bit.

Universal Studios’ loss is Walt Disney World’s gain. Disney Springs has already opened some incredible new experiences, restaurants and stores, and they aren’t stopping anytime soon. The NBA Restaurant in Universal Studios is closing, to reopen in Disney Springs at a future date. Though it isn’t known yet if this will be located in the existing Disney Quest building or if it will be housed in a new building, one thing is for sure: this is going to be far more than a restaurant, and far more than a retail store. It will be a fully immersive hands-on experience, putting your family right in the middle of the action of the NBA.

Walt Disney World is already home to some of the most incredible steakhouses in the world. Adding STK to its repertoire is simply icing on an already delicious cake. The restaurant is going to be massive at 14,000 square feet. It’s going to cover two floors, have the only rooftop dining option in Disney Springs, and by the sounds of things, it is also going to have a DJ. So for those who are upset at the loss of Pleasure Island’s nightlife options, it looks like your fears can rest.

Chef Masaharu Morimoto from Iron Chef America is coming to Disney Springs. Promising a menu which will feature dishes from all over the continent, two stories, waterside seating, and terraces, this restaurant is going to be massive. If you didn’t think Disney could expand on its already overwhelming options for culinary excellence, think again.

5. The Edison at Disney Springs

This is perhaps one of the most exciting additions coming to Disney Springs. Described as a 1920’s industrial gothic look, The Edison will have themed areas like “The Tesla Lounge”, “The Radio Room”, and “The Patent Office”, and will be the sister site to its LA location. Yes this is going to be a restaurant, but that’s not what is going to draw people. Entertainment will feature live music, cabaret performances, contortionists, palm readers, and DJs. I must warn you though, this is one you are going to want to leave the kids at home for.

Obviously, theme is something that Disney prides itself on. So when this bar opens, the first thing you’ll notice is the aviation theme. The ceiling fans in the design, for example, call for propellers. Every aspect of the establishment will feature the aviation theme, including the food: one menu item that has been confirmed is “Rolling Boulder Meatballs”. Ring any bells? Jock Lindsay, of course, was Indiana Jones’ frequent pilot. He also had a pet snake named Reggie, for whom he named his steamboat (which will be permanently in dry dock just outside the bar).

The Norway pavilion is about to get a little bigger and a lot colder. An entire new structure is being built between Mexico and Norway to house a brand new meet and greet for Anna and Elsa. Of course what everyone is waiting for, though, is to see what is replacing Maelstrom. The answer? A new Frozen-themed ride called Frozen Forever After. The queue is said to feature Wandering Oaken’s Trading Post, complete with Oaken shouting “yoo-hoo”. The ride itself will be another boat ride featuring each and every one of our Frozen friends. Olaf and Sven will start us off, and along the way we’ll visit Grandpappy, Kristoff, Anna. The ride will culminate with a visit to Elsa in her ice palace singing “Let It Go”. Doubtless everyone will be bursting down the doors when Frozen Forever After is finally open. Hopefully this will just be the beginning of more additions to the World Showcase so that kids will enjoy it just as much as adults do.

2. Night-time Safari and Rivers of Light

No longer will anyone be able to call Animal Kingdom a half-day park. Soon, a night-time spectacular like the ones featured in Hollywood Studios, Epcot and Magic Kingdom will make its way to Animal Kingdom. The massive landscape of Discovery River will come to life with music, floating lanterns, water screens and swirling animal imagery. It’s rumored that even the tree of life will light up with color-changing leaves. Now, in order to make something like this a reality, you need to be able to draw people to the park at night. One of the main reasons that Animal Kingdom isn’t open late is out of respect for the animals (most animals in the park have far different habits at night than they do during the day). So to enhance the night-time experience, Kilimanjaro Safaris is being reworked so that a night-time safari can take place as well. There isn’t much word on it yet, but this is extremely exciting. Who wouldn’t want to catch a glimpse of the nocturnal lives of these beautiful creatures?

The biggest expansion Animal Kingdom has ever seen and probably will ever see brings a whole new land to this already vast park. James Cameron’s Avatar is still the biggest selling movie worldwide, by such a huge margin it may never be surpassed. The movie itself was ground-breaking, so it’s no surprise that Pandora would find a home on Disney property. The new land is said to feature jungle foliage, floating mountains and the ruins of a military base. 3D projections and hologram effects will be in abundance, and at night, lighting effects will be incorporated into the sidewalks and plants, which will respond to touch. What about rides, you ask? Of course. Two major ones, for sure. A boat ride à la Pirates of the Caribbean and a flying ride (think Soarin’) will make this area popular for kids of all ages.

Each and every corner of Walt Disney World has more and more changes coming every single day. It really is true. A vacation a year is something everyone should work into their schedules.