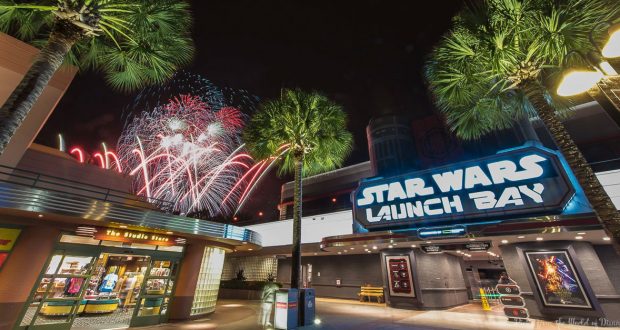 It’s been over 40 years since Star Wars was released, and the story is still going strong. Now that Lucasfilm is owned by the Walt Disney Company there are new movies in the works, an animated television show, new books, additional video games, and much more. Star Wars is a natural fit for Walt Disney World, and Disney seems to realize that. There are already several Star Wars offerings, and more are on the way. Here are eleven must-dos for Star Wars fans. Honorable mentions go to Darth Vader cupcakes and BB-8 souvenir cups. If you love Star Wars, you’ll want those as well.

If you want to relive some of your favorite moments from the first seven movies and also sit down in the air conditioning, plan to catch Star Wars: Path of the Jedi. You’ll see the story of Anakin and his transformation to Darth Vader, followed by moments with the next generation of Skywalkers. Sit back, relax, and enjoy the show. While you’re watching think about how far the franchise has come in the past 40 years, and of what the future holds. It’s an exciting time to be a Star Wars fan.

If you enjoy shows and seeing characters, then Star Wars: A Galaxy Far, Far Away is for you. Scenes from the movies play, including scenes from Rogue One: A Star Wars Story. Several characters appear on stage, including Darth Maul, BB-8, and Chewbacca. Star Wars: A Galaxy Far, Far Away takes place several times a day. If you want to see more live action, watch March of the First Order. Captain Phasma leads her loyal troops up Hollywood Boulevard to the Center Stage.

If you’re looking for Star Wars merchandise, you’ll find plenty at Walt Disney World. You can build your own lightsaber, create a droid, have your picture added to an iconic scene, and more. There are T-shirts, backpacks, Mickey Ears, mugs, and plenty of others surprises. As you exit Star Tours you’ll find Tatooine Traders, which is usually crowded but sells some great items. There are other places at Disney’s Hollywood Studios that sell T-shirts and similar things. If you’re at Disney Springs, stop by Star Wars Galactic Outpost. They have many fun choices, and they might be less packed than Tatooine Traders. Keep your eyes open for Her Universe. The line was created by Ashley Eckstein, the voice of Ahsoka Tano and self proclaimed Star Wars geek.

8. Jedi Training: Trials of the Temple

You do not have to have a child with you in order to enjoy this show. Kids ages 4 to 12 will learn the ways of the force, then battle a Star Wars villain who is strong with the Dark Side. There are several shows throughout the day. If you have a child the correct age who wants to participate, sign up at the Indiana Jones Outpost. You will want to get there right as the park opens, spots fill up fast. Your child needs to be with you, he or she can’t be riding nearby Star Tours while you fill out the paperwork.

Star Wars Launch Bay is part museum, part character meet and greet, and part store. There is a short film that you can watch, and then you can look at replica props from the films. There are three character greetings in the building; Chewbacca, Kylo Ren, and BB-8. FastPass+ is not available for the greetings, and you will wait in three separate lines. There is a store as you exit, where you can purchase anything from a custom MagicBand to a full sized Han Solo costume. You go at your own pace in Star Wars Launch Bay, so if you want to absorb every detail it won’t be a problem.

6. Star Wars Half Marathon – The Dark Side

RunDisney holds several special themed runs throughout the year, and it makes sense that one is based on Star Wars. Star Wars Half Marathon – The Dark Side is held in April. (The Light Side takes place at Disneyland Resort in January.) You can sign up for a 5K, a 10K, or the half marathon, which is 13.1 miles. If you’re really strong with the Dark Side, try the Dark Side Challenge. That consists of running both the 10K and the half marathon, for a total of 19.3 miles. All of the runs are a thrill, and you’ll find entertainment and characters along the route. If you’re a Star Wars fan and a runner, start working on your costume now. You’ll have a blast.

What better way to experience Star Wars than to visit some of the planets for yourself? With Star Tours – The Adventures Continue, you’ll put on 3D glasses and board a Starspeeder 1000. C-3PO is your pilot, even though he wasn’t supposed to be. You’d better watch out because there is a rebel spy on board; or is that spy you? You’ll visit two planets and have encounters with various Star Wars characters along the way. There are already numerous ride possibilities, and Disney has promised that more worlds will be visited in the future. Star Wars fans will want to ride this one several times, and they still might not hit all the locations or characters.

What better way to end your day than to be surrounded by Star Wars? That is what happens with Star Wars: A Galactic Spectacular. The Chinese Theater becomes a movie screen, but the show is more than just projections. Fireworks are shot off high above, lasers in the trees make you feel as if you’re in the middle of the trench run on the Death Star, and movie clips add to the experience. The music of the legendary John Williams completes the show, making it as close to perfect as possible. If you’re worried that you won’t be able to get a good viewing spot, sign up for Star Wars: A Galactic Spectacular Dessert Party. You’ll enjoy delicious food and drinks inside Launch Bay, then head to a reserved viewing area for the show.

Want to experience everything that is Star Wars related at Disney’s Hollywood Studios but aren’t sure how to get it all in? Sign up for the Star Wars Guided Tour! You’ll see the shows, ride Star Tours, explore Launch Bay, get character pictures, dine on a Star Wars themed dinner, and end the day with the Star Wars: A Galactic Spectacular Dessert Party. The tour lasts seven hours, so it will take a good part of your day. The cost is currently $121.12 plus tax for any age. Make reservations by calling 407-939-7529.

We are thrilled The VOID recently joined the scene at Disney Springs. Star Wars: Secrets of the Empire is a fantastic entertainment option at Disney’s Springs The VOID. Perfect for tweens, teens, and adults, The VOID is an ultimate virtual reality experience. Team up (or be teamed up) with four guests and go under disguise to recover the secrets of the Empire. The multi-sensory environment makes virtual reality feel like…well, REALITY! Star Wars fan or not, you’ll enjoy this one!

If you’re a Star Wars fan, the main thing that you have to do right now is to wait. There are two exciting Star Wars adventures on the horizon at Walt Disney World. One is a Star Wars themed luxury resort that will be an immersive experience. You will feel like you are really in a galaxy far, far away for your entire stay. The second thing that you need to wait for is Star Wars: Galaxy’s Edge. That’s the name of the new land that is coming to Disney’s Hollywood Studios in 2019. The land will have a ride which lets you pilot the Millennium Falcon and another that will place you in the middle of a battle between the First Order and the Resistance. There will be a Cantina, and there are going to be plenty of other surprises. The new land will not be at an established planet, instead it is a brand new destination. Disney promises that Star Wars: Galaxy’s Edge is going to be an incredible experience. From the glimpses that they’ve released so far, they seem to be on the right track.