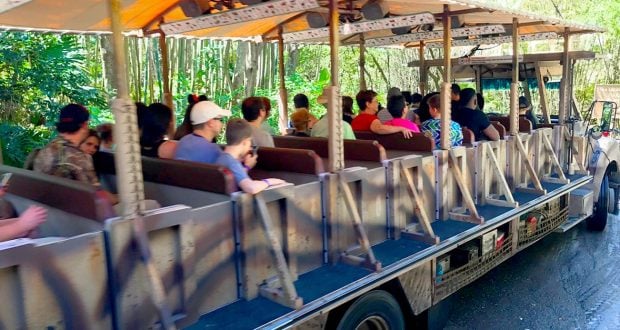 Part of the magic at the Walt Disney World Resort in Florida is the long list of attractions Guests can enjoy at the parks. There are thrilling rides, slowly-moving water rides aboard boats and even rides that take rows of Guests high into the sky! And at Disney World, it’s not enough to have the best attractions—they’ve got to have the best ride vehicles as well! The vehicles help to tell the story of the attraction, and Disney Imagineers have gotten really creative in the development of some of them! Here are 10 of our favorite ride vehicles, in no particular order.

At Liberty Square at Magic Kingdom, you and your family can board a “doom” buggy—if you dare—and tour an old haunted mansion. The mansion is home to 999 happy haunts, but they’re a welcoming bunch and always have room for one more. See amazing special effects that will have you believing in ghosts before the end of the ride! The ride vehicles are black in color and are in keeping with the theme of ghosts and spooks. You’ll want to experience this attraction more than once—that is, if you make it out the first time.

9. Mine Carts – Seven Dwarfs Mine Train

The Seven Dwarfs Mine Train opened in the spring of 2014, and to this day, it’s still a very popular attraction. The ride vehicles are mine carts, and the thing that makes them one of our favorites is that they are not stationary. They sway from side to side as the train of carts moves through the attraction. And thanks to variable speed technology, the carts also slow down as the train enters the Seven Dwarfs’ mine, and then speed up again when the train exits the mine and barrels along the track through the mountains. Hollywood Studios is home to a thrilling attraction that brings the Star Wars universe to life in the newest land, Star Wars: Galaxy’s Edge. Millennium Falcon: Smuggler’s Run has guests board the “fastest hunk of junk in the galaxy”, known as the Millennium Falcon. Soon the Pilots are faced with unexpected thrills as they navigate through the galaxy. Gunners and Engineers also have a role in this six person cockpit. You’ll feel the jerks and turns through what seems like a real galactic experience!

In Fantasyland at Magic Kingdom, Guests can board a brightly colored galleon and take off on a magical flight over the city of London toward Neverland! While aboard your galleon, you’ll see Peter Pan, the Darling children, the Lost Boys, Captain Hook, Mr. Smee and even Tick-Tock the Crocodile! You won’t miss a bit of the adventure, but don’t worry—you’re a safe distance from Hook and Smee!

You’ve got to admit that when it comes to ride vehicles, the haunted elevators in the Tower of Terror attraction at Disney’s Hollywood Studios are pretty cool. Guests enter the old abandoned Hollywood Tower Hotel, which was a beautiful hotel for Hollywood’s elite back during the Golden Age of Hollywood. But late on the night of October 31, 1939, a freak storm hit the hotel and five people that were in one of the building’s elevator have never been seen since. Now Guests can tour the lobby of the hotel on their way to board a haunted elevator. And once they are in the elevator, strange things begin to happen, and all that is heard from the street below are the screams of Guests who dared to enter the elevator!

Over at Animal Kingdom, Guests are immersed in the African savanna when they go on safari and see more than 34 different species of animals at the Harambe Wildlife Preserve. Board an open-air safari truck that looks more like a low-rider bus with no windows or doors. The vehicles give Guests a more authentic experience because they allow for a more “rough-and-tumble” ride, like you would have if you were in the African outback on safari. The trucks are rugged and go through shallow water and over rocky spots. Kilimanjaro Safaris is one of the best attractions at Animal Kingdom!

If the thought of racing to an Aerosmith concert in a low-rider limousine sounds fun to you, you’ll want to check out Hollywood Studios’ Rock ‘n’ Roller Coaster—one of Disney’s most thrilling attractions. Streets in downtown Los Angeles are busy, but you and your pals don’t have time to waste! You’re racing to the Aerosmith concert, and the “road” is full of twists, turns and corkscrews, so hold on tight! At Dinoland, U.S.A. at Disney’s Animal Kingdom, you’ve been given the opportunity of a lifetime—to go back in time to the prehistoric era when dinosaurs roamed the earth. Your mission is to bring an Iguanadon back to the present day. The time rover in which you’re riding is an amazing vehicle—you’ll feel ever dip, drop and switchback! This ride is not for the faint of heart! You’ll want to double-check your seatbelt before you take off for the past! And keep your eyes to the sky! You’ve got to get that Iguanadon and get back before the meteor shower destroys the dinos and you too!

2. Norwegian Vessel – Frozen Ever After

In 2016, the Frozen Ever After attraction replaced the Maelstrom at the Norway pavilion on the World Showcase at EPCOT. It’s just as popular now as it was when it opened! The ride vehicles follow the same track that was used in the Maelstrom attraction, and the Norwegian vessels are the same ones that were used as well. You’ll love this attraction, even if you aren’t a diehard Frozen fan! It’s a journey through Arendelle that tells the story of Princess Anna and Queen Elsa. The latest in audio-animatronic technology is used on the characters in this attraction, including Anna, Elsa, Kristoff, Sven, Olaf and the Snowgies. Hold on tight as the vessel sails down a 28-foot waterfall toward the end of the attraction, and don’t forget to sing along to all your favorite songs from the movie!

No list of beloved Disney World ride vehicles would be complete without mentioning the Dumbo gondolas near Storybook Circus in Fantasyland at Magic Kingdom. You just don’t get much more classic “Disney” than Dumbo the Flying Elephant, and the attraction is classic as well. Step into a gondola fashioned after the beloved elephant himself and once the ride begins, you’ll be able to fly high or low, depending on how you move the lever inside the gondola. It’s a great attraction because for just a few minutes, you can fly with Dumbo—and you’ll think you’ve seen just about everything when you see an elephant fly!