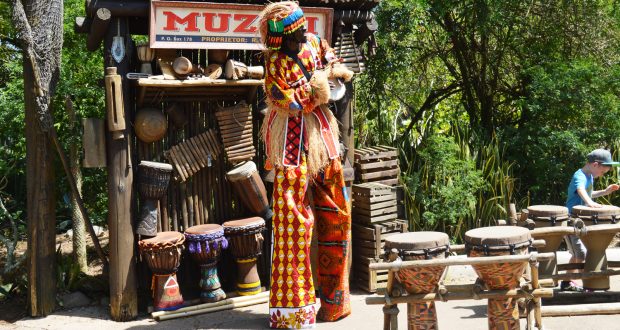 Animal Kingdom is home to some of the best and most fun attractions in Walt Disney World, like Avatar Flight of Passage, Na’vi River Journey, Expedition Everest, Festival of the Lion King, Kali River Rapids, and Kilimanjaro Safari. But staying focused on the big, popular attractions may have caused you to just simply pass by other attractions. Here are 10 experiences you might not have tried at Disney’s Animal Kingdom.

Become a Wilderness Explorer and earn badges by completing tasks and activities throughout the park. This attraction is labeled as being for kids and tweens, but don’t let that dissuade you from joining in on the fun. These self guided tours and missions get you to interact and look at the park in whole new light. Guaranteed you will learn new things about animals, nature, plants, dinosaurs and the list goes on. You can also have a little competition going to see who can earn the most badges!

Backstage Tales is an early morning tour that does have an extra fee on top of the admission price. If you have an interest in wildlife and how Disney cares for the animals, than this tour is for you. You will go on a guided tour backstage and see where the animals are housed, how four tones of food are prepared each day, and you will get a tour of the veterinary hospital. The tour is worth the early start time and the extra fee, a portion of which is donated to the Disney Conservation Fund.

There are a number of quick service locations to choose from at Animal Kingdom, like Harambe Market, Flame Tree Barbeque and Pizzafari, which are all great, but if you like Disney storytelling and theming served alongside your meals, head over to Restaurantosaurus. The story goes that paleontology students turned their dorms and labs into the eatery, and they’ve left behind plenty of props, personal items, artifacts, and gags to keep you entertained as you eat. There are a number of dining areas in this restaurant, so do a little exploring when you stop by and take in all the amazing, and hilarious theming at this dining location in Dinoland.

There are plenty of opportunities to catch some live music around the park. Some acts have scheduled appearance times so grab a guide or look it up on My Disney Experience. Near Harambe Market you can catch Burudika, which is Afro-pop. The music is upbeat and will definitely give you an energy boost! In Anandapur Village, a duo known as Chakranadi play traditional Indian music. These are just two of the live performances that you can catch at Animal Kingdom. There’s no better way to experience the culture of Animal Kingdom than with a refreshing drink or snack in your hand while you take in some live music.

This little counter location located in Africa serves up just a few treats, but they are amazing! Did you know that you can get a Dole Whip here? And not only can you get a Dole Whip, but adults can get a Dole Whip with rum, which is a good excuse to try it here in Animal Kingdom, since you can’t get that variation in Magic Kingdom. Tamu Tamu Refreshments also has a lovely shaded courtyard just behind the counter, which is the perfect spot to rest for a few minutes while you indulge in a snack or beverage.

When in Dinoland you must stop in at Chester & Hester’s Dinosaur Treasures, it is one of the most fun and zany souvenir shops at Disney. Yes, you will see many of the same products you see in other stores, but the theming and all the knick-knacks are what make this place special. It’s just a mish-mash of all kinds of signage, and dinosaur themed toys. Don’t forget to look up above your head in the store so you don’t miss out on the train and dinosaurs hanging up above. There are also plenty of great photo opportunities inside and out of this store.

The cast members at Disney’s Animal Kingdom are extremely friendly and extremely knowledgeable, especially the cast members located throughout the trails, and at Rafiki’s Planet Watch. They have so much interesting information to impart, if you ask. You can learn about the plants, the animals, how Disney cares for the animals, all in a very conversational manner. You never know what kind of amazing things you’ll learn, or who you’ll meet by asking a simple question, or just saying hello!

There are a number of characters to meet at Animal Kingdom that you can’t meet elsewhere, so don’t miss out! Grab a times guide and plan to meet some unique characters like Rafiki, and Dug, Russell and Kevin from Up, and even the only Princess at Animal Kingdom – Pocahontas. Since characters only appear at specific times and at certain locations, they can be easy to miss if you don’t work it into your park plan.

It may take a train ride to get there, but the ride is fun and it’s worth the trek to Rafiki’s Planet Watch to stop at Conservation Station. The entrance way is so bright and colorful it’s difficult to miss. Inside guests can learn about preservation and conservation, there are games and interactive stations, as well as a veterinary clinic to view. There are animals to see here, a science center, and the list goes on. There are so many important things to see and learn about at Conservation Station and in typical Disney style they make it extremely fun and imaginative.

The Oasis Exhibits are along pathways that lead you past lush gardens, waterfalls, and wildlife. It’s easy to waltz right past these exhibits since The Oasis is located very close to the entrance of the park and many people are in a rush to get to Everest or other popular attractions as soon as they arrive. By taking just a few extra minutes to stroll through the tropical gardens, wander across the bridge and admire the wildlife, you can really immerse yourself from the get-go in the theming and atmosphere at Animal Kingdom.