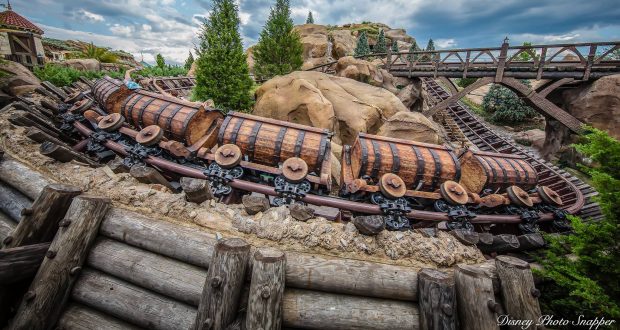 The “story” of the attraction is that you hop aboard the 7 Dwarfs Mine train and travel along the route they take to work, through the forest, down into the mine “where a million diamonds shine”, then back home to see Snow White in their little cottage. This is the story of Snow White told from the perspective of the Dwarfs and it brings some scenes from the 1937 release of “Snow White and the Seven Dwarfs” into our experience on the ride. It is an outdoor and an indoor experience as you travel through the forest, over the mine and into the mine making it both a roller coaster and a dark ride!

10. This attraction is the crown-jewel “mountain” of Fantasyland.

It straddles the original Fantasyland and the “New Fantasyland” joining them together. It is unique and delightful making it a great ride for children 38” or taller along with older family members. Disney wanted this ride to span generations and it certainly does. For the young it is undoubtedly a “thrill ride” to others more seasoned to crazy coasters it is still an enjoyable family ride experience.

9. This is another fun queue with unique experiences.

Guests wind through the forest, cooled by fans along the way on the outside part of the queue. As you progress part of the queue is covered where you can play interactive games such as separating and washing gemstones. The sluice is 15’ long so you can sort the jewels by size and color as you walk along on two sides. The 12 spigots at the washing station turn on as you move your hand under it, and it also produces musical sounds. As you approach the Vault, you may remember the scene where Dopey tosses in a bag of jewels, locks the door and then hangs the key next to the door? Look for the keys right where he left them. Inside the Vault if you and your fellow guests spin all the barrels fast enough Snow White herself appears on the ceiling, dancing with the Dwarfs. At the merge of Fast Pass+ and Standby guests are sorted into two lines an odd number or even number of guests. You are then further sorted to a specific train and car. You will hear a song “Music In Your Soup” which was recorded for the movie but later cut. All the music in the queue is instrumental, and we are to believe they are played by the Dwarfs.
The music is a nice detail of this attraction: from “Music in Your Soup” to the familiar tunes of “Heigh Ho” you will be serenaded by the Dwarfs. In the mine you hear the Dwarfs singing “In The Mines”, also from the film.

8. Some of the most advanced Audio-Animatronic figures are in this attraction.

The Imagineers sought to make the Dwarfs look like they just jumped out of the animated film and into the mine. They spent countless hours looking at the Dwarfs’ facial expressions to reproduce them accurately. Timing all the movements and facial expressions to the song, to the movement of the rest of each Dwarf body, to the speed of the trains, and repeating it exactly for the next train, is quite a challenge, but they did it! Since the faces are animated they join a limited number of other Audio-Animatronic figures. The others are Buzz Lightyear in Buzz Lightyear’s Space Ranger Spin, and Mr. Potato Head at Toy Story Midway Mania and Lumiere in Story Time with Belle. There are additional animated characters in Haunted Mansion but they are singing busts, a floating head, a full ghost, and aren’t attached to AA body figures. The Imagineers hit the mark with the Dwarfs faces and AA figures.

Completely unique new ride system with cars that swing back and forth while flying down the track and earning Disney Imagineering another great patent. More attraction details include-

• Ride duration: 2 ½ minutes. (50 seconds of that is inside the mine)
• 38” or taller height requirement
• Mine contains jewels in 4 different sizes
• Jewels in the mine are in six different colors: red, green, amber, purple, blue, clear
• It is the 4th WDW “mountain”
• Features Grumpy, Doc, Bashful, Sleepy, Happy figures from the original Snow White’s Scary Adventure attraction have found a new home in the Dwarfs’ Cottage at the end of the ride. That means the Snow White, Dopey and Sneezy figures are new for this attraction. (This is a nice Disney touch to include or reuse from a former attraction.)
• The Seven Dwarfs thatched roof cottage looks like the one in the film complete with birdhouses and wisteria vine.
• There are rough carvings of woodland animals on the Cottage beams

6. Look for the details!

Rushing waterfalls and beautiful scenery are enjoyed throughout the ride and brings the sound of waterfalls and twittering birds to the area of New Fantasyland surrounding the mountain.

• Vulture from Snow White’s Scary Adventures; also seen in the film
• Took over two years to build this attraction
• As you go up, out of the mine, look to your left to see the shadows of the dwarfs as they leave work for the day. This is basically a copy of the shadows that cross a log as the Dwarfs march home in the film
• As you near the end of the mine scene, notice the clock that stands near Doc? It is just like the one in the film and as it is strikes closing time Doc begins the “Heigh Ho” song. Go ahead, sing along!
• Look for hidden Mickey’s!

5. Look for the hidden Oswald!

This is hard to catch at first, he is carved into a wooden beam near the edge of the mine exit. There are some small rocks near his ears and right hand. Since Oswald came back to Disney he has been making little appearances here and there. We want more Oswald at Walt Disney World!

• An incredibly quiet and smooth ride
• Twists, turns, hills, drops
• Slower inside the mine, yet fast and quiet on the rest of the ride
• Great views from the top of the hills

I am always intrigued by the ride vehicles, and these are the top of the list for me:
The Ride Vehicles:

• Have the handmade appearance, as if created by Dwarfs accustomed to using axes
• Have aged appearance
• Rocks back and forth
• Seats a maximum of 4 per car, two rows of two, 5 in a train
• Each car took several days to paint, layers on top of layers to age them, and each car tells a story of a different time than the other. Each car is unique.
• Guests must be able to transfer from a wheelchair to ride
• The seats are shaped for two guests, and some larger guests have found the seat to be quite snug. You may want to get a locker to put any large bags in before boarding
• Each rider has their own safety bar to pull down over their legs (you aren’t going to fly out with that bar over your legs and you don’t need to hold on.)

It is completed surrounded by walkways, attractions, restaurants, etc. That made it challenging to all the work crews and much of the work had to be done after park close just to get the vehicles, etc. in that needed a way to the space. For a while all we saw were construction walls as there was a great deal of work that had to be done under the ground level. We were given small peak holes to observe the progression, which seemed like forever, but it finally was finished. Applause to Disney for an adorable new “mountain”.

Along with being a brand new type of ride with the rocking cradle-type cars, this ride has a new evacuation system that when a train stops, the ones behind it are also stopped but those in front of the stopped train can continue on the track. What makes this cool for the guests is that if you are on a train not affected by the stopped train you can complete you ride experience rather than being evacuated from the ride and having to come back to do a complete ride-through.

Restaurants nearby: Be Our Guest-quick service for lunch, reservation-required table service for dinner. You can choose to eat in the famed West Wing of the Beast’s castle or the Ballroom and Gallery are other possibilities. They each have a very different feel to them. This is one of the most in-demand restaurants on Walt Disney World property. Disney resort guests will have the opportunity to choose a lunchtime through the FastPass+ system. Cinderella’s Royal Table is right around the corner and is a table service that is also very difficult to get reservations for.

Restrooms: there are restrooms near Gaston’s Tavern, to the left of the entrance, or near Fantasyland Railroad Station to the right.
Character Meet & Greets: there are currently no regular appearances by Snow White and the 7 Dwarfs but they sometimes appear here during hard ticket events. Snow White appears near her wishing well in the Germany pavilion at Epcot.

Gift Shop: There was a gift shop opposite one front corner of the attraction, which was called Seven Dwarfs Mine Shop. The shop was closed and the sign taken down during the last year of construction for the ride. It has remained closed and just recently construction walls have gone up and we are anticipating a gift shop themed properly for this new attraction. Nothing official has been released regarding the gift shop space.

TIP: As it is the newest attraction in Magic Kingdom, the Fast Pass+ for it is the way to ride without standing in an extended queue. Ride it at night to really enjoy the special lighting and the views. The next best time is right at dawn, when the park is open for 24 hours.

Cast Members are dressed in costumes similar to other Fantasyland costumes: tunics, short pants, shirts with billowy sleeves and hats. They are in brown hues for the men and green for the ladies. The men’s costume has a belt with pouch on it, the women do not.

2014-09-06
Cassie
Previous: A Perfect Planning Timeline For Your Walt Disney World Vacation
Next: Top 5 Reasons They Should Let Me Live in Cinderella’s Castle