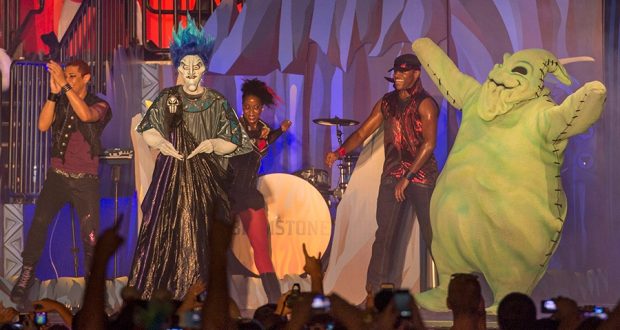 We love the characters we get to meet and hang out with in the Parks, but there are some Disney favorites that we miss! Some have been retired, some are just rare. Either way, we miss them and wish we could see them on a regular basis again!

We’d like to see how far she’ll go. But, really, we’d just like to see her at all. Moana is such a popular character – it’s odd that she’s not around more. She can be spotted at some special events, and in the finale of Fantasmic! but that’s about it. We wish we could spend some more time with Moana and all of her gang, like Maui, Hei Hei, and Pua!

2. Meg and Hercules from Hercules

These two used to be pretty popular in the parks, but they’ve faded away in recent years. Meg was awesome to interact with because she’s just as sassy in real life as she is in the movie. She’d pose for pictures or sign autograph books, but would probably have a snarky comment to go along with it. Herc was his normal Herc self. They played off each other brilliantly and we miss that team!

3. Tarzan and Jane from Tarzan

Here’s a rare pair! Tarzan and Jane were so fun to spot in the parks. If I remember correctly, they usually hung out in Animal Kingdom. Tarzan felt right at home. Jane was always very prim and proper, but still great to talk to! Like Hercules and Meg, these two made a great team. I see pop ups from Tarzan every now and great while, but we miss seeing them regularly!

4. Oogie Boogie from The Nightmare Before Christmas

Ever spotted this evil guy? This villain is tough to find. I think if he makes any appearances, it’s only at special events, like Mickey’s Not-So-Scary Halloween Party or the Villain’s Night. In fact, it’s hard to find any of the Nightmare guys. But I have spotted Jack near Halloween, lurking near the Haunted Mansion…

5. Louis from Princess and the Frog

Everyone’s favorite alligator! Louis is definitely a rare character. We wish we could see him more because he’s so fun! Big, squishy, and green (and not Oogie…), he’s the perfect meet and greet character. He’d especially be awesome if he brought along his trumpet to jam! Although I have heard you might be able to see Louis play on the Disney Wonder…

6. Flik and Atta from A Bug’s Life

Must be an ant thing. Flik and Princess Atta used to be a regular Animal Kingdom visitor. Kind of obviously, right? Flik the animatronic can still be found in It’s Tough to Be a Bug, but Flik the character isn’t really around anymore. These guys were such fun because how often to get to talk to a 5 foot tall bug?!

Oo-de-lally! I think the only time Robin and Gang are in Disney now is for Long Lost Friends events, which is really so sad. We miss classic characters like Robin, Friar Tuck, Little John, Prince John, and the Sheriff. If we saw them on a regular basis, I bet they’d have a lot of fun and even get into a bit of trouble – or at least have an epic chase around the park!

Who we talkin’ about? Like Robin Hood, Chicken Little can only be spotted in special events, but it does happen! To me, Chicken Little is a seriously under-appreciated movie, so I would love to see Chicken Little and Abby! He’s so goofy and awkward, that I can picture him getting into all sorts of things! They’d be a really fun pair to have around again.

9. Quasimodo from The Hunchback of Notre Dame

He just wants to be Out There…and so do we! Hunchback is such a great, classic movie. It’s one that more adults tend to love, so everyone would want to see Quasi out and about! Quasimodo, Esmerelda, Frollo, and even Phoebus have been spotted, but it’s rare. We think Quasimodo would love hanging out with Park guests and we wish it could happen more!

His shoulder angel is telling him to walk around the parks… Does anyone not love Kronk? I just don’t think so. Kronk is the most loveable, misguided sidekick. This rare character use to tower over guests and laugh at jokes and pose for pictures. We miss this dorky gem.

Honorable Mentions: Louis and Wilbur from Meet the Robinsons, The Atlantis Gang, and Goofy’s Son, Max

Who do you wish you could see more?