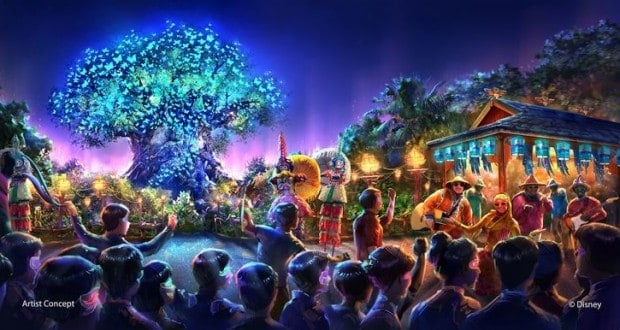 As part of the largest expansion in its history, Disney’s Animal Kingdom theme park will be adding all-new entertainment experiences including a new after-dark spectacular centered around and above Discovery River, new nighttime entertainment including live performers on Discovery Island (pictured) and a new night version of Kilimanjaro Safaris. (Concept art, Walt Disney Imagineering)

Change is in the air at Walt Disney World. There is something new and exciting about to happen in all four theme parks. Unfortunately, change can sometimes mean the end of a favorite. Here are ten updates that will take place at Walt Disney World in the near (or in some cases not-so-near) future.

First, the sad news. The 2015 holiday season will be the last one for the popular Osborne Family Spectacle of Dancing Lights. The lights will shine November 6, 2015-January 3, 2016. The show is included with park admission, and premium packages are also sold. There are online petitions asking that the lights be saved and there have also been suggestions on where they could be moved to, but so far Disney has not changed their stance.

9. Launch Bay and Season of the Force

With a new Star Wars movie set to be released on December 18, it is no surprise that there will be more presence of the franchise at Walt Disney World. There have not been too many details released about the two new choices. Launch Bay is expected to open late in 2015. It will take place in Animation Courtyard. There will be sneak peeks into Star Wars: The Force Awakens and it is supposed to include character interactions. Even less is known about Season of the Force. It’s an event that is supposed to be held “early 2016”. All that has been announced so far is that there will be a new fireworks show. There has been a rumor that Season of the Force will replace Star Wars Weekends, but that annual event is still listed on the Walt Disney World website for Summer, 2016.

8. Soarin’ Around the World

Soarin’ is a popular ride in which guests feel like they are hang gliding high over the state of California. The ride originated at what is now Disney California Adventure at Disneyland Resort. A replica opened at Walt Disney World in 2005 as part of the Happiest Celebration on Earth. In March, 2015 it was announced that the ride will be expanded and receive another theater, cutting down on wait times. At the D23 Expo in August the good news continued. Soarin’ is going to become Soarin’ Around the World. A new film will include glimpses of natural and man-made wonders such as The Great Wall of China and the plains of Africa. No date has been announced, but it’s rumored to be opening in Spring, 2016.

Each day Downtown Disney grows closer to becoming Disney Springs. The traffic signs on Walt Disney World property now direct guests to Disney Springs instead of Downtown Disney. By the end of 2015 some of the most anticipated restaurants will have opened. Parking is getting easier, especially during the day. When the transformation is complete there will be twice as many stores and restaurants as there were before. The most noticeable changes are currently in The Landing, formerly Pleasure Island. Of course, with transformation comes change. The biggest change is that DisneyQuest is going to close to make way for the NBA Experience. A final date has not been announced, but it’s expected to close early in 2016.

6. Star Wars Half Marathon – The Dark Side

One complaint that many guests have had over the years at Disney’s Animal Kingdom is that there is nothing to do at the end of the day. That is soon going to change. Rivers of Light will be a nighttime show that will take place on and around Discovery River. The details of the show have been kept under wraps, but it is expected to include live performers and music, floating lanterns, and water screens. No official opening date has yet been given, but it should be sometime in 2016.

Love it, hate it, or tolerate it, Frozen is making its presence known in the parks. One place where the movie will soon make its mark is the Norway Pavilion at Epcot. Maelstrom closed in 2014, and it is being remade into a new ride called Frozen Ever After, which will open in 2016. It is expected to use the same track and boats from Maelstrom, but that is where the similarities end. Guests will ride into the Winter in Summer Celebration. Frozen characters will make appearances, and there will be music as well. Another update for the Norway Pavilion is that a Frozen themed meet and greet is going to open, giving guests another place where they will be able to meet the fictitious sisters.

3. Pandora – The World of AVATAR

There has been a lot of talk since “Avatar Land” was first announced for Disney’s Animal Kingdom on September 20, 2011. Things are finally starting to fall into place. The new land will officially be called Pandora – The World of AVATAR, and it is slated to open early in 2017. There will be two rides in the area. The first one will be a family boat ride that will take guests through native Pandora. The second is a highly anticipated flight simulator where guests will ride with the banshees. James Cameron and others from the movie have been collaborating on the project to make it as authentic as possible. The sequel to Avatar is supposed to be released in 2017, which will help to generate more buzz for the new land.

At the D23 Expo in August there was a lot of anticipation about the future of Disney’s Hollywood Studios. Two new lands for the park were announced. The first one is tentatively called Toy Story Land. The 11 acre area will take over much of the space formerly used by Studio Backlot Tour, and other areas of the park as well. Guests will head into Andy’s backyard. The popular Toy Story Midway Mania! will be expanded to cut down on wait times. Two new rides have also been announced. The first will feature aliens and saucers. The second will be a family friendly roller coaster based on Slinky Dog. No time frame for construction has been given.

The second new land promised at D23 is based on the Star Wars franchise. The land has been rumored for years, and some details have finally been given. The land will feature two new attractions. The first will allow guests to take over the controls of the Millennium Falcon while on a secret mission. The second will take riders into the middle of a battle between the Resistance and the First Order. A Cantina-styled restaurant is also expected to be part of the 14 acre expansion. No word has yet been announced on what will need to close to make room for the land, but rumors say that only the E Ticket attractions are safe. A date has not been given for the opening of Star Wars Land, but construction is slated to begin in 2016.