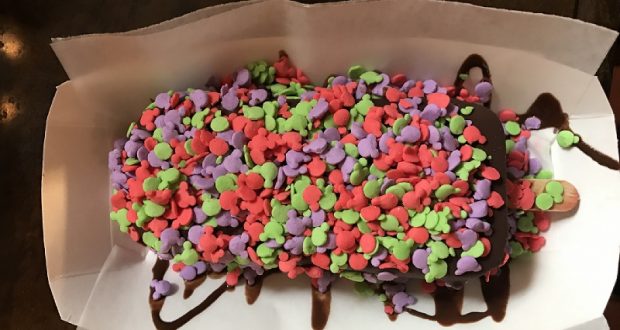 10 Best Options For A Vegan Diet At Disneyland Resort

I need to state right off that I’m vegetarian, not vegan. My adult daughter is also vegetarian and she’s allergic to dairy. She’s my Disney companion, and we always order vegan when we eat out, including when we eat at a Disney restaurant.

Vegans at Disneyland have lots of choices. Dole Whip and Mickey Pretzels are vegan, as is the popcorn that you’ll buy at stands. Fresh fruit is also sold in several locations. When it comes time to enjoy a meal, you won’t go hungry. If you’re vegan you already know to ask lots of questions, distributors change and sometimes an option that didn’t have dairy or egg last time suddenly will have it. If you’re unsure, you can always ask to see the ingredient list. Here are ten vegan options at Disneyland Park; some may use shared fryers. There are plenty more choices, and remember that not everything is always listed on the menu.

These two restaurants aren’t really at Disneyland Resort, but they’re both close by. Vegan Pizza features the pizzas that you haven’t had for years, such as pepperoni or Hawaiian. Calzones and pasta are also sold, and they have a decent amount of desserts. For a special treat that you probably haven’t had in a long time, order a Corn Dog. At Healthy Junk, you’ll find snacks such as Chili Chez Fries, burgers, Tex-Mex, and bowls. They also have shakes, natural sodas, and smoothies. Both Vegan Pizza and Healthy Junk are 100 percent vegan, and they are only a couple of miles from Disneyland Resort. There are local companies that will deliver to your hotel for an added fee.

There may not be a lot of vegan ice cream options available at Disneyland, but this treat makes up for it. At Clarabelle’s you can create your own bar and they’ll then make it for you. The vegan option is close to heaven. Choose mixed berry sorbet and have it covered with dark chocolate. If you want, they’ll add plenty of Mickey shaped sprinkles on top. It’s reason enough to stop by Disney California Adventure.

This may not be the most filling thing that you will eat while visiting Disneyland, but it is tasty. The vegetables could include zucchini, yellow squash, mushrooms, onion, and red and green peppers. They are lightly seasoned and then cooked to perfection. The menu at Bengal Barbecue also includes the vegan sounding Hummus Trio, but that could be prepackaged and come with cheese, so ask before you order.

Chances are that you will spend a fair amount of time in Cars Land, so you will want to know where to go when hunger pangs hit. Cozy Cone Motel is mostly for ice cream and drinks, but you can also find vegan chili here. At Cozy Cone 3 they offer Chili Cone Queso. Of course you’ll have to order it without cheese, and the cone might also not be vegan, depending on the distributor.

If you’re spending some time at Downtown Disney and want to take a meal break, head to Taqueria at Tortilla Jo’s. They offer tacos, burritos, nachos, and bowls, made the way that you want them. If you want to play it safe order the Veggie Bowl. Tell them you’re vegan and they’ll talk you through it. If you still have room for dessert, walk over to Sprinkles and order a Vegan Red Velvet Cupcake.

Portobello mushrooms have become a popular meat replacement in many places. This version of a classic Philly features portobello mushrooms, onions, and bell peppers. You’ll have to order it without cheese. It comes on a Potato Roll which should be vegan, but you might want to double check.

Another popular meat replacement is cauliflower. At Red Rose Taverne, the cauliflower steak is cooked to perfection and served on a bun. You’ll want it without the aioli. When you enter the restaurant tell the first Cast Member that you see that you need to order vegan, and the staff will make sure that everything is made properly. Unfortunately, Red Rose Taverne might not be a permanent location, although no closing date is listed on the Disneyland Resort website. Hopefully if it does close the cauliflower sandwich will end up elsewhere.

Vegans want to meet characters too, and at Chip ‘n Dale Critter Breakfast you can interact with the mischievous chipmunks and some of their friends. Vegans should always ask a Cast Member to walk them through any Disney Parks buffet to make sure that there isn’t any hidden dairy or egg. There’s fresh fruit available, and they should be able to make you either pancakes or Mickey Waffles. If that’s not enough, ask if the chef can make a vegan Hash Brown Omelet. It’s not on the menu or the regular buffet, but it shouldn’t be a problem.

If you’re looking for a filling meal that features your favorite Asian flavors, you’ll want to check out Lucky Fortune Cookery. The Asian Rice Bowl is filled with vegetables and steamed rice, and the meatless version includes a generous amount of tofu. With the bowl you will pick your sauce, ask which one is vegan. Chances are that the answer is teriyaki, but that could change.

If you’re looking for something filling, delicious, and different, you will want to head to New Orleans Square. That is where you’ll find Royal Street Veranda, home of the Vegetarian Gumbo. Even though the name says vegetarian, it’s vegan. A generous amount of tasty gumbo is served in a sourdough bread bowl. It’s messy, but it tastes so good that you won’t care. It could become your favorite meal at Disneyland, it’s that delectable.