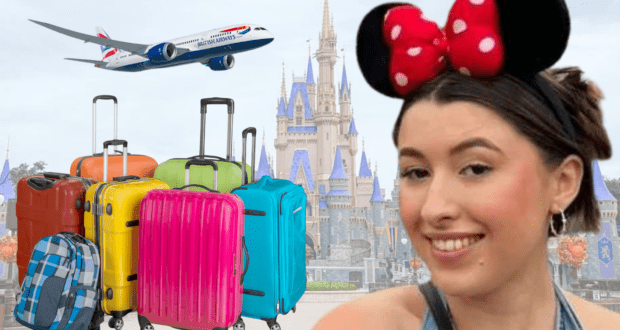 A young woman visiting Disney World from Great Britain says a dream trip to the Central Florida resort was more like a nightmare after more than $3,500 of her luggage and its contents never made it back home with her on her return flight to England.

Leah Middleton describes herself as “Disney-obsessed.” She works as a princess performer in County Durham in Northeast England, and she was dreaming of her next opportunity to travel to the United States to visit the Walt Disney World Resort.

RELATED: The Walt Disney World Resort in Florida may soon be renamed

But what was supposed to be an exciting dream trip ended up being the stuff of nightmares for the 20-year-old, who traveled to Florida with her boyfriend, Tommy Tiazzolla, and spent 12 nights at Walt Disney World. But what had been an enjoyable experience for the young couple soon turned into a very negative and costly experience as the couple returned home to England, only to realize that their luggage had gone missing during their journey from London’s Heathrow Airport to Manchester in early July, according to Chronicle Live.

The couple wanted to remain positive about the situation, so they traveled back home to the town of Dipton, hoping their luggage would soon be back in their possession. But six weeks later, Leah and Tommy still didn’t have their luggage back, and it’s not just the suitcase that Leah is worried about. The suitcase was full of valuable Disney items, as well as some very expensive personal items.

Leah is a princess entertainer, and she dresses up as Belle from Disney’s Beauty and the Beast at parties. As she is a Disney fanatic, her missing suitcase contained about $3,500 worth of items, including six Disney-themed backpacks, each of which cost Leah more than $80. She also had packed in the case her prescription sunglasses and her retainer, each of which cost hundreds as well.

“My boyfriend got his case back, and he was updated through the whole process, but I have not been updated since I left Heathrow Airport,” Leah said.

“I was [calling] baggage reclaim every day for the first few weeks and was given a reference code to log in for updates,” she explained. “There were updates on Tommy’s case but not mine. I [called] every day, and every single person told me something different.”

Leah said the most important things to be returned are her sunglasses and her retainer.

“The glasses cost 150 pounds, and I have Invisalign braces and have a retainer for them which costs 300 pounds to replace. I need to replace these as soon as possible, but, if my teeth move any more, then I’m going to have to get new braces, which will cost an additional 3000 pounds,” Leah said.

Clearly, she’s extremely worried about having the contents of her case returned to her.

On July 11, Leah went back to Manchester Airport for the second time. During a phone call with baggage claim, the young Disney fan had been told that her suitcase was at the airport and that she needed to come pick it up. But when she arrived, it must have seemed like a cruel joke, as customer service told her that her case was not there.

Leah has grown frustrated with British Airways, the carrier with which she and Tommy had flown to Florida. She says that she has been calling the airline daily, and she has also contacted them via TikTok, Instagram, Twitter, and Facebook, but to no avail.

“They need to sort themselves out,” she said. “[British Airways doesn’t] seem to understand it is people’s lives they are messing with. Imagine if I was a bride and my wedding dress was in there or if I had a baby and all the baby things were in there.”

More recently, Leah was forced to spend three hours filling out paperwork, detailing her situation and the missing items. But she says that she will still have to wait as long as five weeks, just to find out whether the airline will ultimately compensate her for the lost luggage.

“I can understand British Airways is really busy, but people seem to be reading off a script and are not bothered about helping you,” she said. “The customer service has been really bad. For the first two weeks, I called them every day; I have spent hours on the phone, [and] it has all been a bit of a nightmare.”

British Airways has reportedly apologized to Leah for the delay in “reuniting” her with her suitcase, and according to a spokesman for the airline, they’re doing all they can.

RELATED: One family’s trip to Disney World turns into a nightmare, thanks to airline errors and “passing the buck”

“We’re doing everything we can to reunite our customers with their baggage as soon as possible,” he said. “We apologize for the delay and inconvenience caused.”

According to British Airways, it’s the airline’s policy to send lost or delayed luggage directly to passengers, using the address they provided when they booked their flights. Further, in the event of lost luggage, the airline asks passengers to be as detailed as possible when making a missing baggage report, so that airline employees can identify the baggage more easily.

As of the publishing of this post, Leah still does not have her luggage back in her possession. Here’s hoping it’s found quickly and returned to her so she can move on and not think of this Disney vacation as nightmarish anymore.

2022-08-19
+Becky Burkett
Previous: Popular Halloween experience mysteriously returns to Disney World for the first time since 2019
Next: This Disney World experience has returned after a two-year hiatus, and now it’s selling out FAST