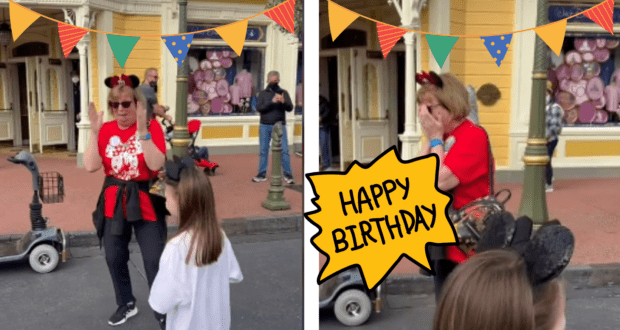 Everyone should get to celebrate at least one birthday at the Most Magical Place on earth. No matter what day of the year you find yourself at Disney World, it’s a good day to be there, and birthdays are just that much more special when you’re surrounded by the magic.

The same was true for a woman who celebrated her 70th birthday at Disney World just a few days ago. In a video posted by Karissa Shaffer (@kshaff20), the woman and her husband can be seen posing for a photo on Main Street, U. S. A. A few younger family members can be seen gathering with the couple for the photo, and that’s when something very magical happens.

RELATED: Woman standing in line for Figment popcorn bucket gets the surprise of her life from a total stranger!

Here’s the short clip of the video:

Here is the Original video y’all have been asking for!!

Together, the two videos have amassed almost 23 million views. (Yes, MILLION!) More than 10,000 comments have been posted in response to the videos, most with well wishes and confessions of crying happy tears while watching the videos.

Karissa’s grandmother was at Disney World to celebrate her 70th birthday, but she had no idea that her entire family, including her grandchildren, would be joining her. In a perfectly timed joint effort on the part of the extended family, everyone was able to come together while Karissa’s grandmother was focused on the camera ahead of her, and photos were captured of her immediate reaction to realizing her whole family had come to Disney World to celebrate with her!