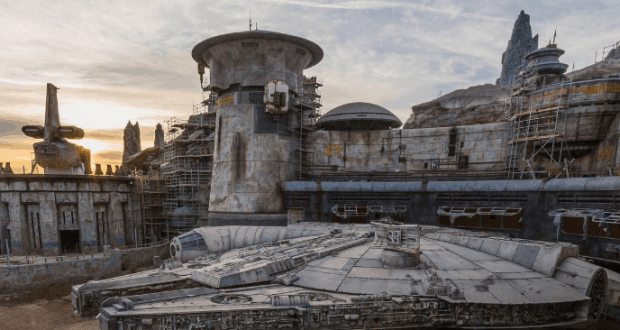 What We Know So Far About Star Wars: Galaxy’s Edge at Walt Disney World

Star Wars fans have been anxiously awaiting the completion and opening of the new Star Wars-themed land at Disney’s Hollywood Studios—Star Wars: Galaxy’s Edge. The opening date has been announced and the excitement is palpable! If you’re planning to visit the new land this year, there are a few things we think you’d like to know. Here is a list of 7 things we know so far about the new land. Enjoy and may the Force be with you!

7. We know the opening date.

Finally! Disney’s Imagineers have decided on an opening date, and that information has finally been shared with the public. Star Wars: Galaxy’s Edge is set to open on August 29 of this year. The Disneyland version of the land will open on May 31. 6. There are two attractions in the new land.

The new Star Wars-themed land will be home to two separate attractions—Millennium Falcon: Smuggler’s Run and Star Wars: Rise of the Resistance. What could be more exciting to a diehard Star Wars fan than the opportunity to pilot the Millennium Falcon?

Though the two attractions at Star Wars: Galaxy’s Edge are sure to be instant hits with Star Wars fans (and probably even non-Star Wars fans), there are a couple of things we know so far that made us frown for a minute or two. First, the Rise of the Resistance attraction will not be open on Opening Day. Disney hasn’t announced an opening date for this attraction as of yet. Second, FastPass+ service will not be available for either of the attractions. Yes, you read it correctly: no FastPass+ service for the two attractions that are sure to be the most popular experiences at the Walt Disney World Resort, at least for a season following the opening of the new land. Disney hasn’t given us a clear reason for this decision, so we’ll have to stay tuned. …there’s one more. Despite the popularity we know will attach itself to the new Star Wars-themed land, Disney has said that entrance to the land may be delayed, limited or completely unavailable at times because the land’s capacity is limited. This can change from day to day—maybe even hour to hour—as it will be directly related to “Guest demand,” which is Disney code for “crowds.”

We also know that the Play Disney Parks app will be a part of Star Wars: Galaxy’s Edge. The game in this land will allow Guests to have their own interactive adventures in Black Spire Outpost. The app is free to download, free to use and lots of fun!

2. There will be multiple choices in quick-service fare.

Though Star Wars: Galaxy’s Edge will not have any table-service dining venues, the land will be home to five different quick-service spots: Oga’s Cantina, Docking Bay 7 Food and Cargo, the Milk Stand (step in and enjoy the green or blue milk that Luke Skywalker loves), Ronto Roasters and Kat Saka’s Kettle. 1. There will also be merchandise galore.

If you’re hoping to score some souvenirs from this galaxy far, far away, the Force is with you. That’s because there will be multiple shops showcasing different Star Wars-themed items for purchase, as well as Galaxy’s Edge merch. Among other things, you’ll be able to build your own light saber and even your own droid! Wow!

2019-04-07
+Becky Burkett
Previous: Looking for Changes in Latitudes or Attitudes? Try Margaritaville
Next: Prime Pretzel Twist Burger is the Burger of the Month at Walt Disney World’s The Edison