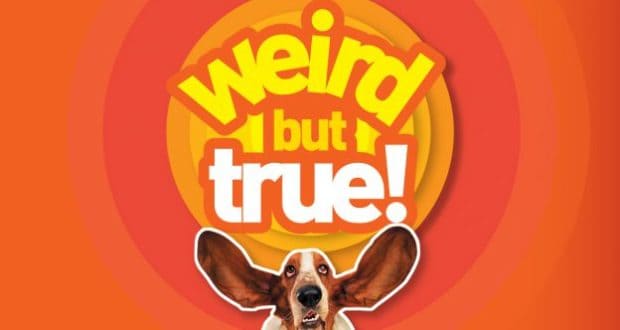 “Weird But True!” Arrives on Disney+

National Geographic’s third season of the Emmy Award–winning series Weird But True! premiered on Disney+ August 14, hosted by children’s entertainers and educators Charlie Engelman and Carly Ciarrocchi. But did you know Weird But True! started as a special feature in National Geographic Kids magazine in 2004 after the former magazine editor’s 60-year-old mom came up with the idea!? Check out all the details below as shared by DisneyParksBlog:

In 2015 Sirius XM launched Weird But True Radio! on the Kids Place Live channel. The show, which aired five times a week, won the Silver Award at the New York International Radio Awards in 2018.

Weird But True! Books launched in 2010, and the series is up to nearly 40 titles, from the original numbered series to single subjects like dinosaurs and sports, and even sticker doodle books and a fun write-in journal. With more than seven million copies in print around the world, kids can read Weird But True! Books in 14 languages, including Chinese, Turkish, Thai and Arabic!

2015 Sirius XM launched Weird But True Radio! on the Kids Place Live channel. The show, which aired five times a week, won the Silver Award at the New York International Radio Awards in 2018.

Online, kids can find tons of fun Weird But True! videos and fun facts at  natgeokids.com/wbt!

Weird But True! can been seen on Disney+, and the books are available wherever books are sold, including ShopDisney.com.

And beware: The weird gets a little creepy when Weird But True! Halloween: 300 Spooky Facts to Scare You Silly publishes September 8, 2020.