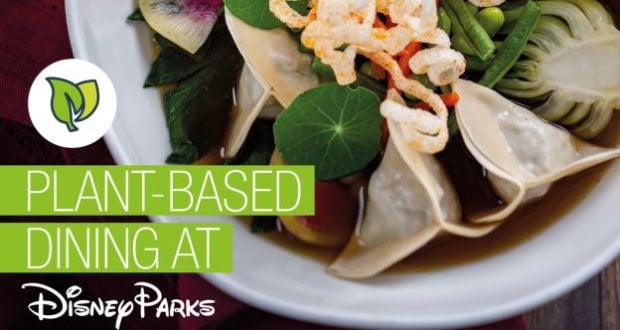 On September 24 it was announced that Walt Disney World was rolling out plant-based options in all of its quick service and table service restaurants. The date given for the new choices was October 1. I was invited to be part of a small media group on October 3, and we learned more about the new choices.

First let me give you a little bit of background. I am vegetarian, and I have been for over 20 years. In our family we have someone who has a dairy intolerance. My husband is also a heart patient, who had very high cholesterol in the past (it’s now under control). We have very little dairy in our home, and no meat at all. I am not vegan, but my diet is not that far from it. When we eat out, I will usually look for a vegan entree. Plant-based is something that I know a lot about.

The event was to teach us more about the new plant-based options at Walt Disney World, and to allow us to sample some of the items. Disney is using the words “plant-based” instead of “vegan”. They are defining plant-based as foods that “are made without animal meat, dairy, eggs or honey” (from Disney Parks Blog). Some vegans will not eat foods that are cooked in a fryer that also cooks meat, or that was cooked on a grill where meat is also cooked. Disney is not promising that these things are not happening. Instead, the ingredients are all plant-based. Not only will you not find meat, there is also no meat stock, gelatin, lard, or anything else similar in these dishes.

It is easy to find which offerings are plant-based, or at least it will be easy soon. A new green leaf icon has been created, and it is being placed on menus and menu boards. You need to be patient with this, because these things take time. There are 400 restaurants at Walt Disney World that need the new icon, so it might take a little bit of time to get everywhere. If you are dining at a restaurant and don’t see the icon, ask a Cast Member what is available.

You do not need to be at Walt Disney World in order to see what the plant-based options are. There is now a helpful addition to the Walt Disney World website. Just head to DisneyWorld.com/PlantBased. There you will be able to learn more about the plant-based options, and find out what is available and where. This information is going to be incredibly helpful to someone like me.

We started our day at Disney’s Contemporary Resort. There we were able to try some breakfast items. The Donut Holes and the Babka are both available for breakfast at The Wave. The Eggless Quiche that we tried is currently an option for conventions and special events.

What is exciting to me is the variety of options. Plant-based burgers (usually from Beyond Meats or Impossible Foods) have been around for a while at Walt Disney World, but there is so much more to find. Meat substitutes are popular these days because they make it easy to replace animal protein in a dish. That said, we tried plenty of dishes that did not include a meat substitute. These dishes were creative and full of flavor. Some of them had a bit of heat, while others were not spicy at all. If you think that plant-based means salad, you are in for quite a surprise. This is not rabbit food.

We learned that the plant-based icon is soon going to make its way to the buffets. For years someone who did not consume animal products would need to have a chef walk him or her through a buffet and point out the items that were safe. The icon is making its way to the buffets, so plant-based items will be clearly marked. It also sounds like the buffets will have more plant-based choices. My personal favorite item that we sampled was the Cauliflower Rice from The Crystal Palace, which is of course a buffet. A dish like that with Winnie the Pooh and friends…sounds like a perfect meal!

Another interesting tidbit of information that we received has to do with the festivals at Epcot. Currently meatless items at the food booths are marked with a “V”. That stands for vegetarian. They don’t contain meat, but they could have dairy, eggs, or honey in them. That will change with the Festival of the Holidays. Instead of having a green “V”, the plant-based icon will appear on the menu boards. In the past some of the festivals have been great with the plant-based offerings, while others have been not as good. Festival of the Holidays was particularly challenging last year, with only sweets for vegetarians and nothing that could be modified for vegans. Here’s hoping that things will be better this year!

We ended our event with dessert. We did not sample just one dish, there were five! (Fortunately, we were given small portions just for tasting.) Plant-based desserts used to be challenging in the past because so many recipes call for eggs, cream, and butter. There are now some great substitutes for these ingredients, and with these the chefs have been able to come up with some fantastic options! Again, there is a good variety. Some of the desserts were sweet, while others were more on the tart side. It’s nice to know that plant-based no longer means that the only dessert option is sorbet. What is a little bit sad, though, is that my favorite of the desserts, the Apple Cinnamon Spice Cake from Liberty Tree Tavern, is a seasonal choice. If you’re at the Magic Kingdom, I highly recommend checking it out while you can.

Remember, it is going to take a little while for the plant-based options to appear on all the menus, the Walt Disney World website, and the My Disney Experience App. Just because you don’t see something listed does not mean that there is nothing there. Ask a Cast Member what is available.

Disneyland in California is also rolling out plant-based options in all of its restaurants. That will happen sometime next year. A lot of people have been asking Disney for more plant-based options for a long time now. It is nice to know that Disney not only listened, they came up with delicious choices.