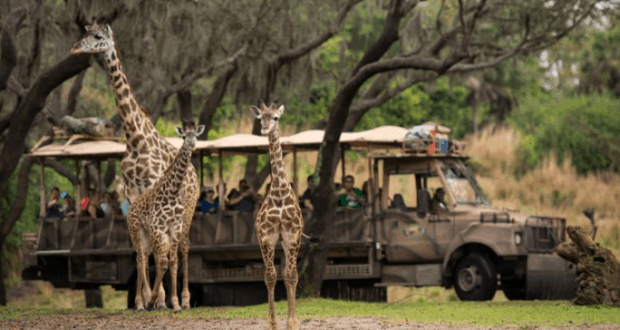 We previously announced the birth of a new giraffe calf born at Disney’s Animal Kingdom within Walt Disney World.  Jabari, the new calf, celebrated his two month birthday.  He has a fun heart shape on his neck and is super adorable out on the savanna at Kilimanjaro Safaris within the theme park.  The calf was made famous by his birth, also on the savanna, on January 14th.  He is a male Masai giraffe and is known to be a very bold, brave and curious boy.  His name, Jabari, means “brave one” in Swahali, which seems to be very fitting.

Jabari is now standing at seven feet tall and has spend the last couple months bonding with his mom, Mara, in a backstage environment.  He reached his developmental milestones and has now returned to Kilimanjaro Safaris to officially join the rest of the giraffe herd there.

Check out this video below of his debut:

The Disney animal care team is typically given the honor of naming baby animals but this time the naming choice went to the safari drivers because they played such an important role in keeping guests calm during Jabari’s birth. Several of the drivers were on hand this morning to see Jabari in stride, which is really awesome!

Who else thinks Jabari is super adorable?