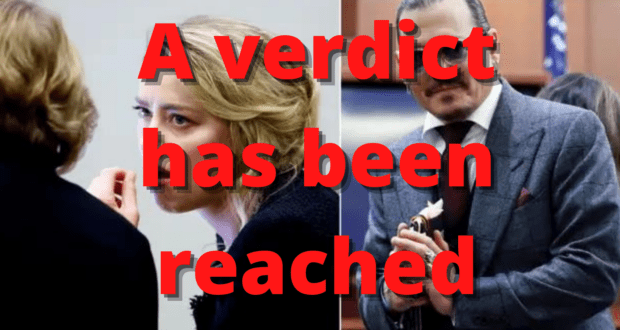 The jury has reached a verdict in the Johnny Depp v. Amber Heard defamation trial, and it will be announced this afternoon.

It has just been revealed that the jury in the Johnny Depp v. Amber Heard defamation trial that took place over six weeks in Fairfax County, Virginia, has reached a verdict in what some are calling “the trial of the century.” Their findings will be announced today at 3:00 p.m. EST.

Johnny Depp will reportedly not be in Virginia for the reading of the verdict, as he is in the U.K. at this time performing in a series of concerts with guitarist Jeff Beck.

UPDATE: "Due to previously scheduled work commitments made before the trial, Mr. Depp will not be physically present for today's 3pm verdict and will be watching from the United Kingdom." – source close to #JohnnyDepp v. #AmberHeard @LawCrimeNetwork

Amber Heard, however, will be present in the courtroom at the time the verdict is read.

Amber Heard WILL be present for the verdict. Johnny Depp will NOT. He is in the UK. #JohnnyDepp v #AmberHeard pic.twitter.com/F6zG58c0X4

DisneyDining has been following the trial since April 11, and when the verdict is announced, you will be able to read about it here, including details about the jury’s findings.

2022-06-01
+Becky Burkett
Previous: Fans have a lot to say online about Disney’s newly-released “Pinocchio” trailer, like “Where’s Pinocchio?”
Next: JUST ANNOUNCED: The Jury has Spoken! Captain Jack Sparrow has won!