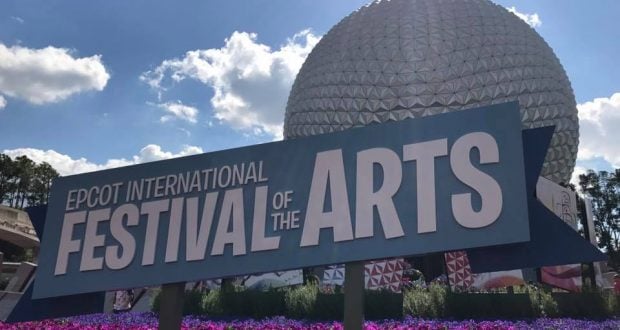 Ever dream of taking a spur of the moment Walt Disney World vacation? It’s time to stop dreaming about it and do it! This winter is a great time to head to Central Florida. Here are ten things to help convince you to pack and leave ASAP.

Fans of Star Wars: The Last Jedi will be happy to know that the film is well represented at Disney’s Hollywood Studios. Star Wars Launch Bay now includes information on the film, and scenes also show up in Star Wars: A Galactic Spectacular at the end of the night. If you still haven’t seen the film, stop by Disney Springs. At AMC 24 Dine-In Theaters you can enjoy dinner and a movie, and there’s a good chance that you’ll watch the film on a bigger screen than the one in your theater back home.

2018 arrived with a bang in Central Florida, with freezing temperatures and wind chills unlike the area had experienced in years. The good news is that the cold weather lasted for only a few days. While the rest of the country thaws out, Orlando is once again enjoying the temperatures that many elsewhere won’t see until summer. Winter weather in Florida can be all over the place, so make sure you check the extended forecast before you leave home and pack accordingly.

Signature and frozen margaritas, tacos, empanadas, and guacamole, what better reason is there to plan a last minute trip? Choza de Margarita is a walk up location in Epcot’s Mexico Pavilion. It features fresh flavors and creative concoctions such as the Acan Grapefruit Margarita. Mexican beers are also available, as are nonalcoholic drinks.

Star Wars: Galaxy’s Edge won’t open until sometime in 2019, but that doesn’t mean you can’t be among the first to look like you’re ready for it. Galaxy’s Edge merchandise is already being sold. You’ll find t-shirts, pins, prints, and more. If you need more of a sneak peak than that there are two possibilities at Disney’s Hollywood Studios. The end of the new scene in Star Tours – The Adventures Continue gives you a glimpse of the planet Batuu. You can also see part of the Galaxy’s Edge model in Walt Disney Presents.

There is never a time at Walt Disney World when there aren’t crowds. At the beginning of the year, after the Walt Disney World Marathon Weekend (which took place the first weekend of 2018), crowds are typically more manageable. This is also a great time to hit up Disney’s Hollywood Studios. Once Toy Story Land opens this coming summer, the park will be packed. Take advantage of FastPass+ and you should be able to hit everything in the park before Andy and his friends take over.

5. A Wrinkle in Time Preview

The classic story A Wrinkle in Time is set to hit the big screen on March 9. The stars of this epic tale include Reese Witherspoon, Oprah Winfrey, and Mindy Kaling. There is already a lot of great buzz about this picture. If you’d like to fuel your excitement, head to Disney’s Hollywood Studios on or after February 9. A sneak peek will be running throughout the day in Walt Disney Presents, but only for a limited time.

4. Star Wars: Secrets of the Empire by ILMxLAB and The VOID

For over 40 years fans of been dreaming of having a chance to immerse themselves fully in the Star Wars universe. At Disney Springs, that’s now possible. Star Wars: Secrets of the Empire by ILMxLAB and The VOID will take you and three other people on a virtual reality adventure like you’ve never experienced before. You’re on a secret mission to Mustafar for the Rebellion, and you’ll solve clues along the way. You might even come across some familiar characters. It’s great fun for your entire group.

3. The Edison and More

After a few delays the much anticipated The Edison is finally open at Disney Springs. It’s a restaurant by day and night club in the evenings, in fact, after 10:00pm you need to be 21 or older. The menu is delicious and quirky, and there’s live entertainment. If you’re looking for something a bit calmer, try Maria & Enzo’s Ristorante. It’s located in the same complex, and it offers Southern Italian classics in a fun, relaxed atmosphere. The views at Maria & Enzo’s Ristorante are almost as amazing as the food.

For decades, parents have had to gently explain to their children why women are for sale during one scene in Pirates of the Caribbean. One particular favorite is known as “the Redhead”. If you listen carefully you can hear cries of “we wants the Redhead” as you glide by. That is all about to change. February 25 will be the last day of the current scene, the Magic Kingdom ride will then close for refurbishment. On March 19, a new scene, which features the Redhead as one of the pirates, is set to debut. You might want to plan two trips; one to see the old scene one final time and another to be one of the first to experience the new version.