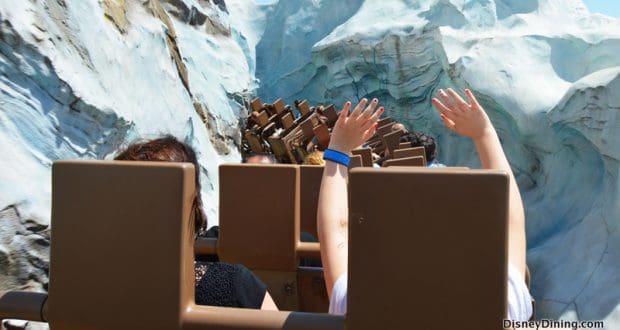 Expedition Everest is tall even by the standards of Disney World’s 19 other mountain-themed attractions.  At 199 feet tall, it’s not only the tallest artificial mountain in a Disney theme park, but it’s also the tallest artificial mountain in the world.  If it were just one foot taller, it would need to have a flashing light on it, as per the Federal Aviation Authority’s requirements!  Despite the Himalayan theme and name, the mountain isn’t actually a replica of Mount Everest; it’s called Forbidden Mountain.

Along with its title of tallest artificial mountain in the parks and in the world, there are other equally impressive statistics for Expedition Everest to boast about.  The ride reaches speeds of 60 miles per hour, and its largest drop is 80 feet.  The track itself is over 4000 feet long, and reaches heights of more than 100 feet.  It took more than six years to design and build the ride, which is held in place with a steel structure.  Quite a bit of steel (5000 tons), and even more concrete (10,000 tons), was used to create it.  Then, the attraction was painted, using more than 2000 gallons of paint.  Perhaps not surprisingly, the ride appears in the Guinness Book of World Records in 2011, where it’s listed as the most expensive roller coast ever built.

Understandably, you’ll probably want to rush by the entrance to Expedition Everest to get in line.  But it’s worth taking some time, especially if you have kids with you, to stop at the entrance to look at the posted height requirement for the ride: it’s one “Yeti foot” tall!  With feet this big, it’s no wonder you’ll see Yeti damage like the ruined tent and trekking equipment (on your left, in the queue).

Part of the excitement of Expedition Everest lies in the fact that it is the very first Disney roller coaster that moves guests backwards as well as forwards.  The ride starts out innocently enough moving forward through the mountains, but then, after realizing the tracks in front of you have been ripped up, you’re suddenly thrown backwards into darkness at hair-raising speeds.  This effect is possible due to the use of two track switches, weighing hundreds of thousands of pounds each, which are computer controlled and move into their needed positions within seconds.  Anyone who has ridden Expedition Everest will know that this is by far the most terrifying, spectacular part of the attraction!

The Yeti that guests are treated to at the top of Expedition Everest is not quite the creature he once was.  At over 20 feet tall, he was built as an animatronic with a full range of motion, able to move several feet horizontally and vertically, making him the biggest and most ambitious of any animatronic figures in the parks.  Unfortunately, a few months after the ride opened, technical issues forced the Yeti into “B Mode”, and since then, strobe lights behind him have made it appear that he’s moving, rather than the advanced animatronics that used to animate him.  For this reason, the Yeti is now – unofficially – referred to as “Disco Yeti”.

If authenticity is what you look for in an attraction, look no further than Expedition Everest!  It may surprise some guests to learn that, in their quest to design as authentic a ride as possible, Disney Imagineers traveled to Nepal for research.  They not only brought back actual items from the area – many of which are on display throughout the ride’s queue – to evoke the feeling of arriving at a Himalayan base camp; they also spent time speaking with people living in this part of the world to gain valuable insight.  In fact, a team from Discovery accompanied the Imagineers to Nepal, to conduct research and make several documentaries about the indigenous people and culture of the area.

For Disney World’s guests, the Yeti may be an exciting, fictitious character adding a thrill to their favorite ride.  It’s also, of course, a favorite to bring home in the form of a soft, huggable, plush toy.  But this creature is actually anything but a huggable or imaginary being to the people living in and around the Himalayas.  The Yeti is taken quite seriously by these people, for whom it is a creature believed to guard and protect this mountainous area.  Disney Imagineers spoke with locals in Nepal to learn about their beliefs regarding the Yeti and its importance in their culture, and the Himalayan landscape.

Expedition Everest’s queue is by far our favorite of any ride on property.  Thousands of authentic Nepalese artefacts and memorabilia are on display, from climbing gear to Nepalese Coca-Cola bottles, all contributing to the strong feeling that you’re actually in the Himalayas, about to descend into the mountains from base camp.  There’s even a “Yeti Museum” that showcases photos taken by the ride’s designer while on expedition in Nepal, in addition to a reproduction of a mold of aYeti footprint.

When your train pulls in to take you and your party into the mountains for your Yeti adventure, make sure you look closely.  If you do, you’ll notice that the train is actually steaming as it pulls into the “station”.  The trains were modelled after traditional steam-powered tea trains, and the steam comes from vents under the train station; however, the steam couldn’t be water-based, in case it rusted the tracks and train.

Thanks to the stellar Expedition Everest gift shop, you no longer have to travel all the way to Asia to find your very own Tibetan prayer flags!  And that’s only the start of the surprising treasures that await guests venturing into the shop.  Gorgeous Himalayan-themed clothing available nowhere else on property, fuzzy Yeti hats, hand-made fair-trade greeting cards, and adorable plush Yetis in numerous sizes are just a few items awaiting passersby.  In addition to its merchandise, the shop is expertly designed to resemble a trekking shop in the Himalayas, which in itself makes a visit worthwhile!  It’s a large shop where you’ll easily spend longer wandering around than you think, which makes it the perfect place for any family members who aren’t a fan of intense roller coasters to hang out while the rest of their party braves Forbidden Mountain.