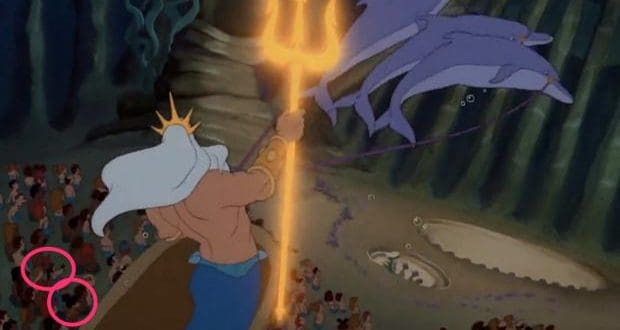 Who doesn’t love Hidden Mickey’s?! These cute little mysteries are a pretty big deal in the Parks, but what about in Disney Movies? Here are my top ten favorite Hidden Mickey’s from Disney movies:

This movie is special because it is chalk full of Hidden Mickey’s! On the bonus features for this movie is even a “Hidden Mickey Version” where you can watch the movie and stop it to click on the Hidden Mickey’s. They are scattered all over the movie, often times in rocks or bugs and that kind of thing. These aren’t super clever or hidden very well because they’re placed so that kids can easily spot them, but it’s still really fun to play and see how many you can find.

9. Snow White and the Seven Dwarfs

Yes, hidden Mickey’s even trace back to the early days of Disney. When I was little this was my favorite movie, and my favorite scene was when the seven dwarfs wash up for dinner (even though they had washed reeecently). Dopey makes quite the spectacle of himself while trying to get clean. As he blows bubbles, they fill the screen! And three of those bubbles float away in the shape of a Mickey head! I’m pretty sure something similar happens in Cinderella too!

This was never a movie I watched as a kid, but thought was really cute as an adult. Watching when you’re older is also handy because you pick up on things you probably wouldn’t have otherwise. In the beginning of this movie, there is a Rescue Aid Society meeting to discuss a message in a bottle that was found. This meeting gathers all of the characters to figure out what to do. But if you take your eyes off the mice and glance around the room, you’ll find another mouse in the form of a clock. That’s right, they have a Mickey Mouse clock hanging on the wall…

7. Beauty and the Beast

Tale as old as time, ears as big as…Well, I don’t know – something big, I guess. One of my favorite scenes in Beauty and the Beast is when Beast gives Belle the library. I love every bit of it: how nervous he is, how blown away she is, how romantic it is, and how cool it is! Normally in this scene I’m so distracted by how many books there are (“I’ve never seen so many books in all my life!”) but if I look a little more closely, I can see something else: a Mickey head! At the very top of the wall the gold scrollwork forms a hidden Mickey! There may be something there that wasn’t there before!

There are actually two Mickey’s that are fun to spot in this movie! Lilo and Stitch go all over town and get themselves into a bunch of trouble throughout the film. In the scene where they are at the farmer’s market, while Lilo is teaching Stitch about Elvis, you can see a stand of vegetables behind them, which hold three melons that make a Mickey! There’s another scene where Lilo and Stitch are in Lilo’s room and if you look really closely you can see a framed picture of Mickey on her wall!

Now here’s a movie that often gets forgotten, but is such a perfect 90’s gem. One of the most iconic scenes in this flick is at the concert. It’s this huge moment for Max and the stadium is full of people waiting to see the big show. And by people, I mean lots of animals that I can’t name. I can, however, help you out with one animal in particular…Mickey Mouse himself came out for the show! He’s just such a good friend that he wanted to support his buddy Goofy!

Hoo-Hoo! Hidden Mickey! Remember that time Elsa froze the whole kingdom and no one knew what to do? Yeah, so does Anna. The stinker. When Anna penguin walks into Wandering Oaken’s Trading Post (and Sauna!) she is on a mission to find out what happened to her sister and get some warmer clothes. As she walks around the shop to the clothes section, she passes by some shelves that hold the “big summer blowout” items. Tucked away on one of these shelves off to the right corner of the screen sits a little Mickey doll propped up!

This one comes at the very beginning of the movie during the concert. You know, that scene that Ariel is supposed to be introduced to society but is off adventuring with Flounder instead and Triton gets really mad. Well, in the audience – amidst the crowd of mermaids – is Mickey, Donald, and Goofy! You have to look really closely because they sort of plenty I don’t know how they got down there or how they’re able to breathe, but they’re ready for that concert!

I love this one. And I would’ve had no idea about it if it weren’t for the DVD extras. Near the end of the movie Jafar turns Rajah into a tiny housecat before being defeated by Aladdin. Once he gets put into the lamp, the magic he did reverses and Rajah turns back into a fully-grown tiger. As he transforms, for a split second his head shifts to have Mickey’s ears! You almost have to put your settings to slow-motion to catch it, but it’s so awesome and clever!

I love Big Hero 6 for its brilliant Easter Eggs. They’re so strategically placed and so hard to find, but ridiculously cool and fun when you do spot them! The hidden Mickey that I can never see but the bonus features swear is there is a Mickey in the form of a gear INSIDE Baymax. You can see it as Hiro steps up into place on Baymax’s back before they fly. The other Mickey can be seen in the car chase scene. When Fred and Honey Lemon are looking out the back of the car, the logo is visible which is in the shape of a Mickey! Bonus shout out to Oswald who can be spotted on the ceiling of Hiro’s bedroom!

Have you spotted any other Mickey’s that you love? Share!