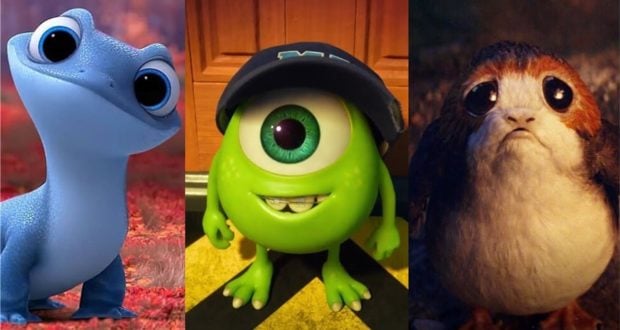 Let’s face it: all Disney characters are cute. Mickey is the original adorable creation. But over the many years of Disney Animation Studio, we have been introduced to some unbelievably cute characters. While this list doesn’t cover them all, here are some of our favorite adorable Disney friends:

Baby Yoda has taken the world by storm. He is maybe the only good thing to come out of quarantine. Although he is technically “The Child” in The Mandalorian series on Disney+, we all call him Baby Yoda. And man, is he cute. He doesn’t speak, so we rely only on his adorable face and even cuter little noises. If he won over the Mandalorian himself, you know he must be cute.

Speaking of the Star Wars universe, we were all introduced to porgs in The Last Jedi. They were native inhabitants of the island Luke Skywalker hid away on. These little puffy guys don’t do much (except annoy Chewbacca) but that only adds to their cuteness. Even though Chewie can’t stand them at first, they cling to him and he eventually has to adopt them. We want a porg!

Bolt is one of the most underrated Disney movies out there. And one thing that makes it so amazing is how stinking cute the titular character is! In the opening scene, a young Penny goes to pick out her best friend from the pet store. Puppy Bolt is distracted with his carrot friend, but has plenty of time to lick Penny’s nose. We just want to snuggle with him.

The unexpected star of Frozen 2 was not actually Elsa – it was the fire spirit! This little lizard dude is unbelievably cute. At first he sort of destroys the woods, but Elsa cools him down. She is immediately smitten with him, and so are we! His giant eyes shift everywhere and enjoy a good tongue lick. He never speaks, but he has so much personality!

Another reptilian cutie on this list is Pascal from Tangled! Rapunzel’s trusty sidekick can always be found on her shoulder, or fighting off Mother Gothel. Pascal is tiny and usually green and makes the cutest little sounds. He also has a super power tongue that can wake Flynn up! Pascal is an amazing friend. We’re so glad Disney offers a Pascal shoulder pal to carry around with us!

Tale as always time, indeed! Chip is the cutest little cup we have ever seen. Even though we don’t get a ton of him in Beauty and the Beast, Chip manages to be a fan-favorite and even saves Belle and Maurice! Whether it’s his childish sense of wonder and silliness, or that adorable little tea bubble game he plays, Chip is undoubtedly adorable.

We’ve never wanted to squeeze a monster’s cheeks more than when we saw little kid Mike Wazowski in Monsters University. In the film, we get a bit of Mike’s backstory, including a field trip where he went to the scare floor at Monsters Incorporated. He basically looks like a little hard candy with an eyeball. He’s so tiny and has a retainer and a squeaky voice. How do you not love that kid?

In the movie Brave, Merida’s three brothers are Hamish, Hubert, and Harris. As humans, they are absolute troublemakers – especially when they eat the leftover spell cake meant for their mom. We first see the triplets as bears when they waddle up to Merida’s room and cry out in bear. Oh my word. Their giant heads and little arms and sounds are too cute to handle.

Okay so we know that he’s not technically alive, but Wall-E is the cutest robot to ever exist. He’s rusty and old and not super suave, but that only adds to how endearing he is! Not to mention, Wall-E is so sweet to Eve and everyone he meets – even his cockroach friend. Wall-E’s eyes and little hands are enough to make you love him, but then he tries to talk and we’re sold.

Baby Groot is basically the star of Guardians of the Galaxy 2. He’s incredibly small, which instantly gives him points. Plus, he still only says three words: I am Groot. The difference is this is done in a tiny baby voice. Groot is pocket size and has this adorable voice no one can say no to. We love him.

Which Disney character do you think is the cutest?

2020-09-19
Molly Elias
Previous: New Aerial Photos of Tron Coaster Construction at Magic Kingdom
Next: Attraction Adjustments With Walt Disney World’s Reopening That You Should Know About