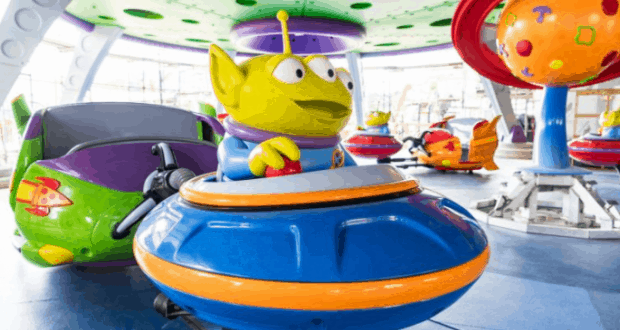 There are three rides in Toy Story Land; Slinky Dog Dash, Alien Swirling Saucers, and Toy Story Mania! These are the park’s new Tier One for FastPass+. That means that you’ll be able to make an advance reservation for only one Toy Story Land ride. Slinky Dog Dash has proven to be the most popular, as expected. Those who aren’t staying on property can make their reservations 30 days in advance. Sometimes Alien Swirling Saucers is available early in the day at the 30 day mark. Those will soon be gone, and then usually the only one left is Toy Story Mania! Grab whatever you can for Tier One FastPass+ if you plan to hit Toy Story Land. All three rides are experiencing long Wait Times, so you’ll be glad that there’s one less line to stand in. 2. Get Your Other Two FastPass+ for the Middle of the Day

Speaking of FastPass+, your Tier One selection will be for Toy Story Land. When should you plan for your two Tier Two choices? Assume that you’re going to spend a fair amount of time in the morning in Toy Story Land, so make your other two selections for the middle of the day. Don’t make them too early, because you don’t want to be in line for a new ride and miss your time.

There are two reasons why you need to stay at a Walt Disney World Resort if you want to get the most out of Toy Story Land. First, you can make your FastPass+ reservations 60 days in advance instead of 30, which is the only chance that you’ll have to get one for Slinky Dog Dash. Second, if you stay at a Walt Disney World Resort, you can take advantage of Extra Magic Hours, so you’ll be able to visit Toy Story Land when the general public isn’t allowed. If you don’t want to deal with the hassle of getting to Disney’s Hollywood Studios using Disney transportation, stay at Disney’s BoardWalk or the Yacht or Beach Club and then take the walking path.

Countless people have been able to ride Avatar – Flight of Passage because they arrived well before Disney’s Animal Kingdom was scheduled to open for the day. With two new rides in Toy Story Land and only one FastPass+ per person, the same strategy makes sense. Arrive as early as you can, and head safely to Toy Story Land as soon as you’re able. If you’re not all that interested in Toy Story Land this will most likely be a great time to hit the rest of the park. 6. Plan a Meal or Two at Woody’s Lunchbox

Even though Woody’s Lunchbox sounds like it’s only for lunch, all three meals are served. Who doesn’t want to try the S’more French Toast Sandwich for breakfast? With gourmet grilled sandwiches and plenty of other options for lunch and dinner, you are going to want to order more than one meal here. It’s a walk-up location, so grab something to eat and then explore the area or get in line for a ride. Order a root beer float as well, it’s going to get hot in those lines. At the moment Woody’s Lunch Box is extremely popular, so plan to hit it at slightly off hours. Toy Story Land during the day is a different experience from Toy Story Land at night. Make sure that you stop by again after the sun has gone down. It is worth a second look. Don’t expect the day and night difference that you experience in Pandora, but Andy’s backyard is still pretty cool once the sun goes down. If you haven’t been able to ride everything, make Toy Story Land your last stop of the day. If you’re in line they will let you ride, as long as you got in line before closing. Most likely there will still be quite a line, but at least you won’t be waiting out in the sun.

One thing that you need to be aware of is that there is little shade in Toy Story Land, and you will spend most of your time outside. Use sunscreen, and carry a bottle of water with you when you get in line. You’ll be glad you did.

Since Toy Story Land tends to be crowded, it is easy to get frustrated. Don’t let the crowds or the Wait Times get you down. Have fun! Strike up a conversation with the family in line behind you, or look for Hidden Mickeys and small details while you wait. Smile and say hello to the Cast Members who are trying so hard to make things magical, even though they’re surrounded by frustrated guests who underestimated the crowds. Whether or not you have a great time is ultimately up to you. You’re experiencing Andy’s backyard! What’s not to love about that?