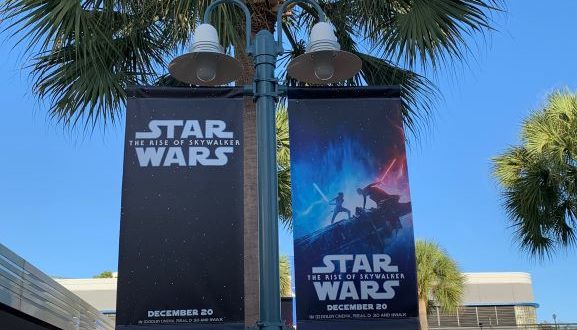 The Rise of Skywalker Has Arrived at Disney’s Hollywood Studios

Disney’s Hollywood Studios is the park to visit if you are a Star Wars fan. Not only is it the home of Star Wars: Galaxy’s Edge, it is also where you will find other Star Wars attractions such as Star Tours – The Adventures Continue and Star Wars Launch Bay.

Since December 20 is the official release date of Star Wars: The Rise of Skywalker, it makes sense that Disney’s Hollywood Studios has added some nods to the film. My daughter and I were part of a hosted media group that got to experience some of these enhancements. Everything here will be spoiler free.

I will start with Star Tours – The Adventures Continue. This is the most obvious change, and it is a big one. There are two new scenes and a new character between those scenes. The character who appears has been released by Disney, but I am still not going to say who it is. This was my favorite surprise in the updated ride, and I do not want to ruin it for anyone who might not yet know. The two new scenes were very well done. More than ever you feel as if you are a part of the action. If you have problems with motion sickness you might want to skip it, the ride now moves more than ever.

There is one thing that I want to warn you about with the updated version of Star Tours. If you have not yet seen The Rise of Skywalker and are trying to avoid spoilers, you might want to wait to ride. While the spoilers aren’t giving any major plot points away, you will wonder how you got where you are. You could also realize that a couple of things might be about to happen while watching the movie.

Another place where there are some The Rise of Skywalker enhancements is Star Wars Launch Bay. You will notice the movie’s presence as you approach the building. Once inside, the new items are not in the room on the left like when Solo came out. Instead, you will walk through the front of the building and past where the character meet and greets are located. There is a room that is filled with costumes and props from the new movie. Both the Resistance and the First Order are represented. You’ll see Poe’s costume, Sith Trooper armor, various weapons, and other pieces. Some of them are replicas, and others are on loan from Lucasfilm. It’s hard to take good pictures of most of the items because they are behind glass and there is a lot of glare. There is plenty to see.

Before you leave Launch Bay you might want to stop by D-Tech. You can find a station in Launch Bay Cargo. This is where you can personalize a phone case or MagicBand, and they now have magnets as well. The selection grew recently, and it is “most impressive”, as Darth Vader would say. If you’re looking for something with The Child (aka Baby Yoda) on it, you will want to stop by.

Another place where there has been an update is in Dok-Ondar’s Den of Antiquities in Star Wars: Galaxy’s Edge. This is where you can find legacy lightsabers; which are lightsabers that are high quality replicas of the ones owned by various characters from the saga. There are two new lightsabers that I saw. One is listed as Ben Solo and the other Reforged Skywalker. I can’t say for sure that these were added because of the release of The Rise of Skywalker, but they were not there the last time that I stopped by.

There is plenty of new merchandise in the parks to celebrate both The Rise of Skywalker and Star Tours. At Disney’s Hollywood Studios, the original version of the ride debuted on December 15, 1989, which means that it just celebrated its 30th Anniversary. (Star Tours opened at Disneyland two years earlier than that.) There are now t-shirts, hats, pins, figures, bags, and collectibles for sale. Some of the items are Disney Parks exclusives. One of my favorite new pieces is the D-O Sipper. It’s adorable.

There is one more major enhancement that is coming to Disney’s Hollywood Studios to celebrate the final film in the Skywalker Saga. Star Wars: A Galactic Spectacular is currently on hiatus, while Jingle Bell, Jingle BAM! lights the skies for the holiday season. When the Star Wars based show returns, it will include scenes from Star Wars: The Rise of Skywalker.  Star Wars: A Galactic Spectacular will return on January 6, 2020.