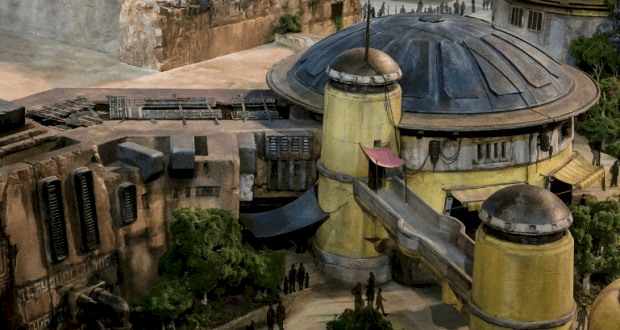 The Last Jedi: The Beginning Of A New Era At Walt Disney World

We only have about five weeks to go until the much anticipated premiere of Star Wars: The Last Jedi and that’s just the beginning of all the galactic things to come in the next 2 years at Walt Disney World. The Force Awakens really brought Star Wars back to the forefront back in 2015 and created a whole new fan base for the younger generation. It was a huge box office hit and because of its popularity this new film coming out has fans amped up beyond belief. Of course, part of that is just based on Episode 8 itself but part of it for Disney fans is probably fueled by all the amazing new additions coming to Hollywood Studios and other parts of property in the next 24 months. There is so much to look forward to starting in just a few weeks so here is the rundown of it all, what are you most excited about?

The day before the big Last Jedi premiere, AMC Theater at Disney Springs is showing all seven episodes of Star Wars back to back and ending with the premiere of Episode 8. The event will actually begin at 10:00pm on December 13th. The tickets cost $75 per person and be prepared to sit for 22 hours of screen time. Will it be amazing and totally get people psyched for the new movie? Yes. Will your butt probably fall asleep after sitting that long? Yes to that too. It’s not for everyone but die hard adult fans will probably jump at the chance to experience this on Disney property.

Roll out the red carpet because it’s here. It’s the moment we have all been waiting and holding our breath for.  Fire up your light sabers and get to Disney Springs AMC theater! If you don’t care to sit through the 22 hour and 42 minute marathon the day prior, you can now purchase tickets online to reserve your seats for The Last Jedi which “officially” hits theaters 12/15/17. Customers who purchase advance tickets through Fandango will also receive a complimentary Star Wars: The Last Jedi poster while supplies last. Fans are allowed to dress in costume for the event, however masks and weapon props will not be allowed in the theater.

After a brief hiatus, Star Wars Galactic Nights will be returning to Hollywood Studios on 12/16/17 just in time to celebrate the new movie. This will be an epic night for fans who are longing to get that fully immersive experience. Guests will get to experience such things as:

This is a special ticket event meaning that you will need to pay an additional fee to enter. Hollywood Studios will be closing at 6pm that night unless you have tickets to Galactic Nights. Ticket prices are $129 for adults and $124 for children ages 3-9. Discounts are available for Annual Passholders and DVC members.

Star Wars: Galaxy’s Edge is the official title for what many of us know informally as Star Wars land. The long-anticipated project is set to open tentatively in summer 2019. Guests at this year’s D23 conference got a sneak preview of the model and now guests at Hollywood Studios can do the same. At the theater that formerly housed “One Man’s Dream”, park guests will now get to view part of the models for both Galaxy’s Edge and Pixar Playland which will be debuting at the park in summer 2018. Star Wars: Galaxy’s Edge is the largest-ever, single-themed land expansion at Walt Disney World resort. The expansion will actually unfold on an entirely new planet and the setting has been described as an outer-rim frontier town and trading port, a remote spot that’s occupied by people and aliens both from the light and dark sides. The land will also include the famous “Cantina” which will serve Star Wars inspired food and beverages and guests will be able to pilot a Millennium Falcon simulator.  The other big attraction will place thrill seekers in the middle of a climactic battle between The First Order and the Resistance. It all sounds so amazing and I’m sure however Disney does this it will go far beyond what you could ever imagine it being.

There were a few new hotel expansion announcements that came out at D23 this past year, but by far the most exciting is the addition of a new Star Was themed hotel coming to the resort sometime in 2019. This resort will allow guests to immerse themselves in an entirely new form of Disney storytelling. From the moment you check in for your 2-night resort stay (yes, it’s limited to that amount of time) you will instantly become part of the Star Wars story and a citizen of the galaxy. Every person who visits will be assigned a unique journey that they will embark on and also have to opportunity to be outfitted in full Star Wars attire that fits with their character’s experience. Every window in the hotel will have a view into space and the staff will consist of droids, aliens, and humans from the galaxy as well. It will basically be the ultimate form of live action role playing that will allow you to live out the Star Wars fantasy that you have always dreamed of. Over the course of their 2-night stay, guests would have personalized interactions with Star Wars characters and performers throughout the Starship resort, have an all-inclusive Star Wars meal experience, and engage in story ‘quests’ and missions throughout the Star Wars Starship Resort and Star Wars Land. As with all over the top things that Disney does this will come with a hefty price tag of about $1000 per guest. While it sounds expensive you have to consider that it will most likely include meals, access to Hollywood Studios and special activities that won’t be offered to regular park guests. While it may not be for everyone this hotel will have fans of the force clamoring to get in.

Are you planning on attending this year’s Star Wars events or are you saving up for what is up and coming in 2019? Which of these are you most excited about? However you choose to celebrate Star Wars, may the force be with you.