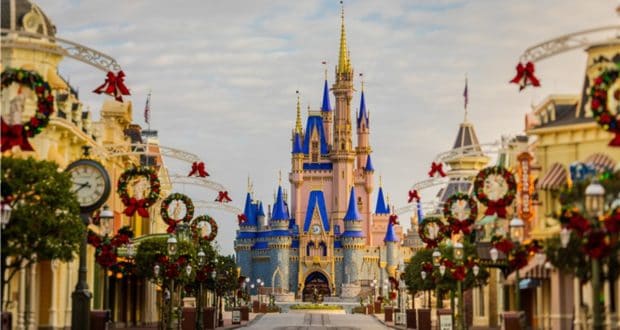 The Holidays Have Arrived at the Magic Kingdom: Review & Photos Here!

Even though less than a week has passed since Halloween, the holidays started on November 6 at the Magic Kingdom. On that day I was part of an invited media group to see all that was going on. (I’m a local Passholder, and I would have been there anyway.) Things look a bit different this year, but the holiday spirit was alive and well.

I’ll start with the things that you won’t find this year. Mickey’s Very Merry Christmas Party is not taking place, and there are no Castle Dream Lights. There is no meet and greet with Santa. That doesn’t mean that it feels like something is missing, because it didn’t feel that way at all.

Let’s move on to what we do have. I’ll start with the decorations. While things were scaled back for Halloween, there are plenty of decorations for Christmas! The tree is one of the first things that you will see when you enter the park. There are decorations all up and down Main Street, U.S.A. Holiday music plays throughout the land. The festive feeling that you hope to find is in the air.

Instead of parades and meet and greets, Disney is still holding Character Cavalcades. These all have switched over to a holiday theme. You’ll find many of your favorite characters, and you’ll enjoy the music that would play during Mickey’s Once Upon a Christmastime Parade. Cavalcades include Goofy and friends, princesses, Main Street Philharmonic, Mickey and friends, Hundred Acre Wood, and Santa. With the exception of the Hundred Acre Wood gang (they ride a trolley so they need the trolley tracks), the cavalcades follow the normal parade route. What’s fun is that there are elements of Mickey’s Once Upon a Christmastime Parade in the cavalcades. You’ll still see reindeer, toy soldiers, and gingerbread men. You’ll even smell the gingerbread! The cavalcades run throughout the day, and there are great places to watch all along the route. The times are random, to keep crowds from gathering. Check out details and video of each Cavalcade here.

We may not have character pictures right now, but that doesn’t mean there aren’t pictures that you will want. There are plenty of extra MagicShots at the Magic Kingdom right now. If you want to know what picture you can find and where, just ask a PhotoPass Photographer. That’s the easiest way to find the right spot.

The holidays also mean special treats, and there are plenty to find in the Magic Kingdom. You can enjoy goodies such as An Orange Bird Christmas or Let It Snow Taco. I tried two of the seasonal selections. The first was the Pistachio Chia Tea Float from Aloha Isle. The spiced-chia tea was good, and I was really impressed with the pistachio soft serve. The cake pop was just okay in my opinion, but that could have been because I enjoyed the soft serve so much. A friend and I split the Twice Upon a Cupcake from Main Street Bakery. It’s a vanilla cupcake with a red velvet Hidden Mickey in the middle. The cupcake was moist and not overly sweet. The Christmas Tree on top was also filled with cake, it was not a huge glob of frosting. That was a smart idea.

We may not have the lights on Cinderella Castle this year, but that doesn’t mean that it’s not a sight to behold! Instead of icicles, we’re treated to four different scenes. One scene represents Minnie with polka dots, another has a winter feel, and a third is filled with Christmas colors. My favorite, though, was the holiday sweater. It really did look like a Christmas sweater, you could even see the stitches. These are not projection “shows”, instead they are great backdrops for pictures. Each scene lasts for 15 minutes. Listen for the jingle bells, and then the spotlights in the sky will start to move. The scene will then change. The transitions are fun, and they happen fast! The projections started just a few minutes after 6:00.

One more thing about the projections on Cinderella Castle. You do not need to stand in front of the icon in order to see them. Some of the best views are on the side, where you can also get the castle’s reflection in the water. In Fantasyland there are no projections, but there are still lights shining on the castle.

The Magic Kingdom was open until 9:00 on November 6. A few minutes before 8:00, Mickey and some of his friends arrived at the Main Street Train Station. They waved to and interacted with the people below. It was nice to be able to see the characters one final time before leaving the Magic Kingdom.

If you’re looking for some holiday magic, there is plenty of it at the Magic Kingdom. From the decorations to the cavalcades to the new scenes on Cinderella Castle, it all feels like Christmas. Things are different this year, but different does not need to mean that everything is bad. Disney has proven that they can follow safety guidelines and still make sure that Walt Disney World is the most magical place on Earth. There’s extra pixie dust in the air for the holidays. Well done, Disney.