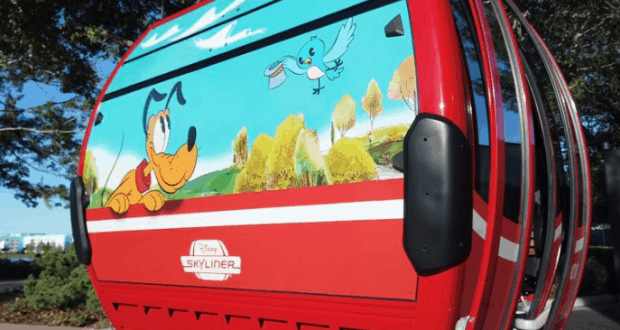 We are getting more and more excited about the new Skyliner transportation system at Walt Disney World. We love the Disney buses, the monorail and the boats around the resort, but we are looking forward to this new system that will give Guests a bird’s eye view of the park. Here’s what we know about the system so far.

11. Disney’s Riviera Resort, which will be on the Skyliner route, will be a Disney Vacation Club resort—the 15th DVC property yet. It will be located between EPCOT and Disney’s Hollywood Studios. It will have 300 rooms and a rooftop restaurant. Disney has announced this is scheduled to open December 16, 2019. 10. It will be an electric-powered gondola-style ride that makes use of big gears to move the gondola ride vehicles along the route. Because the entire system is grounded, the Skyliner will be able to stay in operation, even during a lightning storm, per the manufacturer of the ride—the Doppelmayr Garaventa Group. The electrical work alone cost Disney a cool $3.8 million! 8. The system boasts some impressive abilities. The manufacturer states that the gondolas used in the Disney Skyliner system can operate in winds of up to 35 miles per hour—not hurricane force, but strong winds nonetheless. The system can also feasibly move 3,000 Guests through every single hour.

7. The Skyliner system will include several stations. The station at EPCOT’s International Gateway will be somewhat reminiscent of structures from the early 1700s. The station at Disney’s Caribbean Beach Resort will have the feeling of an open-air village. At Disney’s Hollywood Studios, the station will be located close to the entrance and will gel well with the entrance and the bus stations. The station between the Art of Animation Resort and the Pop Century Resort will be fun, creative and exciting (but Imagineers are mum on the details).

6. The current construction has created terrible eyesores at multiple places around Disney World. We know the finished product will be worth it, but right now the fences, the construction materials in the water at Hourglass Lake, the construction vehicles and the cranes are unsightly, and there’s not a lot Disney can do to hide the construction because the towers for the Skyliner are so tall. 4. Each section of the system cost Disney $1.2 million.

2. Though the Skyliner will be a ride, no FastPass+ service will be offered, as the system’s purpose is to provide another means of transportation in the parks, rather than serving as an attraction only.

1. There is no firm opening date set yet, but Imagineers are hopeful that the first gondola will take flight in fall of 2019.