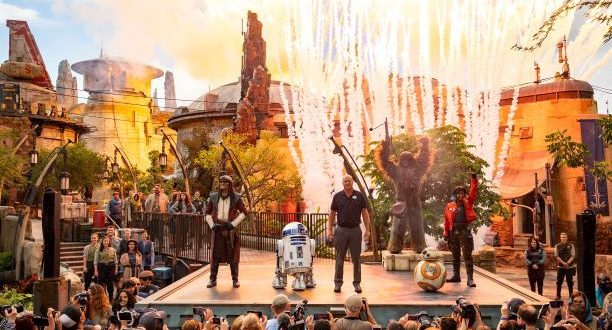 Star Wars: Galaxy’s Edge is the most ambitious expansion ever at any of the Disney Parks. After all, people (myself included) have been dreaming of living out their own Star Wars experience since 1977! I have been lucky enough to visit Galaxy’s Edge on both coasts. I’ve shared lots of information; from official events, as a regular guest, and as an Annual Passholder. On August 27 and 28, I was once again part of an invited media group. Some of us had seen Galaxy’s Edge before, but not everyone had. I’d like to share a little bit about all that happened, and give you a couple of suggestions.

I have had two moments in Galaxy’s Edge that have blown me away, just by seeing something. The first was in California, when we entered the land for the initial time. We were brought in a back entrance, and we suddenly were staring at the Millennium Falcon. It was awesome! The second was here in Florida. At the event we were given a sneak peek at the land’s second ride, Rise of the Resistance. It doesn’t open until December 5, and I am already counting down. We saw Poe’s X-wing, which is outside of the building. The moment that I will never forget, though, was inside. We stood inside of a Star Destroyer, with dozens of Stormtroopers standing in front of us. There were also two First Order officers, and the ship’s large window was in front of us. For a brief moment, Star Wars was not a story, it was real. I cannot wait for this ride to open.

Millennium Falcon: Smugglers Run is such a good time. The queue is half of the experience. Make sure that you walk through it, even if you do not plan to ride. I’ve been asked if the ride is rough. The answer is yes, it can be. Take the health warnings seriously. As cool as it is, you do not want to take any chances.

I had my best view yet of Oga’s Cantina. It really is a fun spot. The space is fairly small, which is part of the reason why it is so hard to get reservations. Rex is the DJ. If you remember the original Star Tours ride, Rex was the pilot. Good thing that he’s better at playing the hits! The music is part of the experience. Most of it was written specifically for Galaxy’s Edge. One more word about Oga’s Cantina. Even though the reservations say “breakfast”, “lunch”, and “dinner”, it is a spot for drinks. If you come hungry you will most likely leave hungry. There is not a lot of food.

I finally was able to visit Savi’s Workshop. In some ways, this is Galaxy’s Edge at its finest. There is a lot of secrecy at the entrance, they don’t want the First Order to know what is going on inside! The Cast Members inside were fantastic. It was easy to suspend disbelief and really become part of the story. After the initial telling of the tale the Cast Members were more than ready to help out, because some of those pieces just did not want to go together. Making your own lightsaber is not cheap, but you will end up with a high quality souvenir. It was a great experience. If you’re worried that you will not be able to fly home with your lightsaber, check the FSA prohibited items list. Someone has a sense of humor.

The atmosphere at Docking Bay 7 Food & Cargo is one of my favorite spots. I’ve visited on both coasts. The menu in California is slightly different than the one here in Florida. I asked about that, and was told that there are plans to add more items here. Here’s hoping that it won’t take Disney too long before someone realizes that Florida needs the Ithorian Garden Loaf. I had it in California, and it was really good.

One thing that I would like to recommend is that you download the Play Disney Parks App before you visit Star Wars: Galaxy’s Edge. There are four different sections to the parts that work in Galaxy’s Edge; hack, scan, translate, and tune. What is nice about the app is that it doesn’t matter how crowded Galaxy’s Edge is, you will keep busy and have a great time.

The official dedication for the Disney’s Hollywood Studios version of Star Wars: Galaxy’s Edge was held on Wednesday, August 28 at 10:00am. Chairman of Parks, Experiences, and Products Bob Chapek had the honors. He was joined by Hondo Ohnaka, Chewbacca, R2-D2, BB-8, and some Stormtroopers. The ceremony was carried live by Disney Parks.

As a lifelong Star Wars fan, I really enjoy Galaxy’s Edge. I think that not basing it on a known world was a good idea, since many of us already have our preconceived notions of what Tatooine or Coruscant would look like. Black Spire Outpost has the Star Wars feel, and there is certainly a lot to explore. Whether it’s drinking blue milk or watching Chewie work on an X-wing, Galaxy’s Edge needs to be experienced.