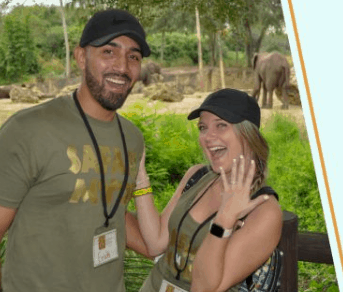 We have a really awesome story to share from Disney Parks Blog as part of their #FeelGoodFriday series. Last Friday there was a marriage proposal during a Caring for Giants tour at Disney’s Animal Kingdom. Erick Gomez asked his girlfriend, Kayla Fernandes to marry him and she said yes! The pair are Walt Disney World annual passholders and love adventure.

Per Disney Parks Blog, “This moment was more than a decade in the making – the couple first met each other in an 8th grade English class and quickly became friends. Friendship eventually turned into love, and the couple started dating and bought annual passes to explore Disney together. Now, Erick and Kayla are ready to take their relationship to the next level.”

“Kayla loves Animal Kingdom, especially the elephants, and I wanted to do something unique,” Erick said. “So, I found the Caring for Giants tour, and I knew that would be the perfect spot.”

Cast members Patrick and Maddie were told about the Erick’s plans at the tour check-in desk and they helped to ensure that his plan went smoothly.

Maddie typically captures photos on Wild Africa Trek and tagged along ot help capture photos of the proposal. Patrick also picked out a few elephant-themed surprises, celebration buttons and a congratulations card to help make the moment even more special.

“I was so honored to be the one to capture such a special moment for Erick and Kayla,” Maddie said. “Seeing Kayla’s reaction as he asked, and her excitement to tell her family was so sweet.”

For Patrick, “I’ll never forget the joy on their faces when they walked back onstage after the tour,” he said. “Knowing that our team helped create a memory they’ll have forever is easily one of my favorite parts of this job. Adventure is out there, and I hope they never stop looking for it together!”

Congratulations to Erick and Kayla!