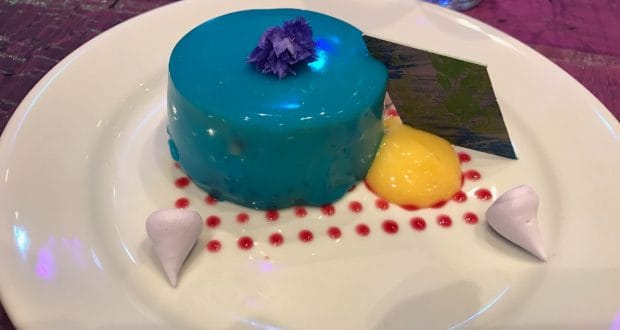 On Thursday, April 6, 2017 I had the privilege of attending the Pandora – The World of Avatar Showcase Event. It took place at Disney’s Contemporary Resort. The event was meant mostly for travel agents, in order to get them caught up on the latest happenings at Walt Disney World. I am not a travel agent, but I do know that working with one who specializes in Disney vacations will take a lot of the stress out of your trip. It was nice to be included, and everyone made me feel welcome.

The event started with a meal, based on Pandora and what might be served there. Satu’li Canteen will be the main restaurant in the new land. The dinner started with a large salad featuring baby greens, rainbow vegetable tendrils, and apple and date chutney. The entree for most was grilled chicken breast and also braised short rib. I’m a vegetarian, so I was prepared to skip the entree, but Theresa, one of our main servers, would not let that happen. Theresa was incredible, she dropped everything to bring me a meatless entree that consisted of tofu with mushrooms, onions, and greens. On the side was roasted sweet and red potato hash. That dish is on the menu for Satu’li Canteen, you might want to try it once the restaurant opens. Dessert was Na’vi Forest Blueberry Cheesecake with Lemon Curd. It was as rich as it sounds. A similar dessert is on the Satu’li Canteen menu.

The presentation for the travel agents started once the meal was done. Photography and recording were not allowed, but there was not a lot of new information. The presentation was hosted by “Kenny” and “Bernice”. They ran through the latest additions at Walt Disney World, using humor at times. A fair amount of time was spent talking about Disney Springs and the changes there. After the other parks and water parks had been mentioned, the presentation moved on to Pandora – The World of Avatar. A video tour was given that was footage of the new land, which Disney claims isn’t really a land at all. You’ll cross the “bridge between the two worlds” and be transported to another existence. From the shots in the video, it is obvious that it is going to be gorgeous.

Pandora- The World of Avatar is set to open on May 27, 2017. It is part of Disney’s Animal Kingdom. It will feature two new rides; Avatar Flight of Passage, and Na’vi River Journey. Satu’li Canteen will be the main restaurant, and Pongu Pongu will feature beverages. Windtraders will be the main store. There are Passholder previews scheduled for before the opening, but from what I’ve heard the spots are all filled. One thing to keep in mind, there will be special Extra Magic Hours for Walt Disney World Resort guests. These will run May 27 through July 4, and only Pandora will be open at the park. More information on Pandora – The World of Avatar will be found here at Disney Dining as it becomes available. 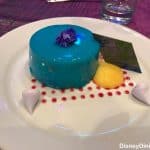 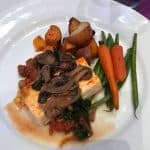 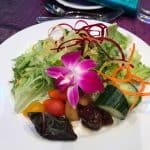