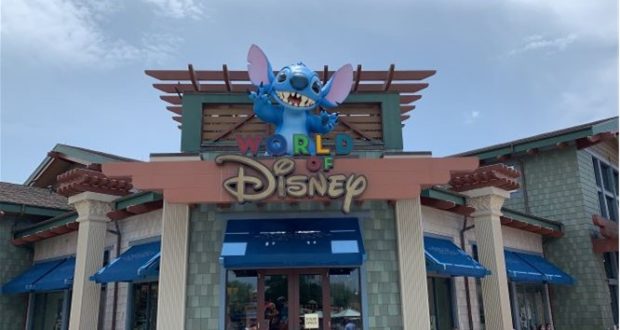 One week ago Walt Disney World began its phased reopening with the relaunching of several third-party stores and restaurants at Disney Springs. On May 27, some of the Disney-owned establishments opened their doors for the first time in over two months. Since I live only a few minutes away, I decided to check it out.

I’ve been to Disney Springs a couple of times since it reopened. It has never been busy, and for the most part people have been following the rules. Today the weather might have kept some people away, it rained right before my daughter and I arrived. We parked in the Orange Garage, Lime was closed when we arrived at around 1:30.

We immediately headed to World of Disney. I had no intention of going inside, I just wanted to see what was going on. I spoke with a friendly Cast Member who was explaining the procedures to guests who wanted to go inside. They were taking people’s cell phone numbers. When it was their turn to enter, they would receive a text message. He asked each group how many members were in their party. He told me that the wait at that time was six hours. He also said that he had heard that there was already a crowd at 8:00am, but was sure that others had arrived even earlier than that. At 1:30 there was a line to get your name and number on the list, but it was moving quickly. All lines look long right now, but that is because people are following the social distancing rule.

Next we walked over to Marketplace Co-Op, which had also just reopened. There was a similar procedure in place there, but there was no line to give your name and cell phone number. The wait to go inside at Marketplace Co-Op was shorter, it was three to four hours.

There are already several third-party owned restaurants open at Disney Springs, but May 27 was the first day for a Disney owned restaurant. D-Luxe Burger is open once again! It is only accepting Mobile Orders, so you will need to have the My Disney Experience App downloaded on your phone. Cash or credit cards were not being accepted, only Mobile Orders. The Cast Member at the door told me that they had not been overly busy. That could be because some of the best Disney Springs restaurants reopened last week, there isn’t as much of an urgency to have a burger as there is to buy new Minnie ears.

Mobile Ordering was handled a little bit differently than normal. We went on the app, and we picked a timeframe. From there, we decided what we wanted, and then hit the “I’m here, make my order” button. I already had a card on file, and there was a step to double check to make sure that was the card I wanted to use. After I placed the order, we needed to wait outside. When the order was ready, we received a notification. A Cast Member opened the door for us so that we would not have to touch the handle.

Inside there were numbers on the floor, which were the numbers where we were supposed to head to pick up our food. The numbers didn’t really matter, because a Cast Member asked us for the order number, and then found our food. There was an area set up for drinks, and Cast Members were getting the beverages for people. We just asked for a couple of cups of water. They had mercy on us and used the big cups. Usually at Walt Disney World they will give you the smallest size cup when you ask for ice water.

The food was not served on a tray, it was in a disposable paper bag. The front and back dining areas were open, with the tables scattered. There was also outdoor seating available, with plenty of space between the tables. In the front dining room where we ate there was a Cast Member with gloves and a bottle of disinfectant. She was cleaning tables as soon as people were finished. Another Cast Member kept wiping down the doors.

We didn’t stay at Disney Springs for too long after we finished our meal. The weather looked like it was about to turn nasty, which it did before we were out of the parking garage. We’ll be back to visit World of Disney soon. It’s nice to have a little more of Walt Disney World open. Each day we are a step closer to experiencing the magic once again.

2020-05-27
PaulaK
Previous: Interview with Bob Chapek, CEO of The Walt Disney Company, on Why Disney Chose July To Reopen
Next: The New-Normal Park Packing List for Walt Disney World