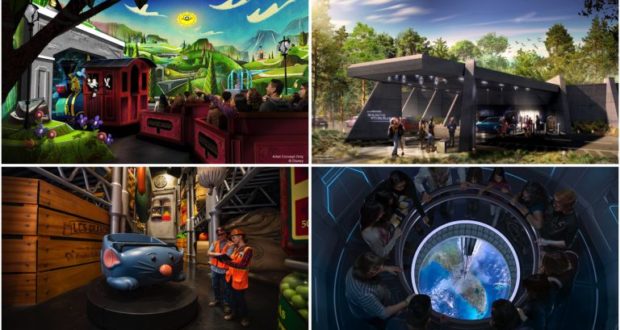 Star Wars: Galactic Starcruiser is now set to open to guests in 2021!  “In this new type of immersive vacation, you’ll become the hero of your own adventure in an experience that surrounds you 24/7 in Star Wars storytelling.” This is going to be an amazing resort experience unlike anything that guests have ever experienced at Walt Disney World!

Remy’s Ratatouille Adventure has been confirmed to officially open in summer 2020 at the France pavilion at Epcot. You can also check out this great image of the ride vehicles and a section of the attraction!

Mickey Shorts Theater in Disney’s Hollywood Studios will show an original short film that features Mickey Mouse. There will also be a photo opportunity for guests. Check out this newly released artist rendering of the theater!

There will also be three newly developed films that will debut on January 17th, 2020 at Epcot. Here is a rundown of the films below:

Space 220 Restaurant is one of the newest restaurants to join the Walt Disney World family and it will debut this winter at Epcot. The space elevator at the restaurant will take guests 220 miles above the earth’s surface for amazing views and a one-of-a-kind dining experience.

Regal Eagle Smokehouse: Craft Drafts & Barbecue is another new dining location that is coming to Epcot. This location is a fast-casual restaurant that will also open this winter at The American Adventure pavilion. The restaurant will feature food and beers from different areas around the United States.

Roundup Rodeo BBQ Restaurant will be joining the line-up of offerings at Toy Story Land. The location is set to open sometime in 2020. The experience will be an immersive restaurant that will take guests to a fun rodeo right within Andy’s backyard.

Which of these experiences are you most excited for?