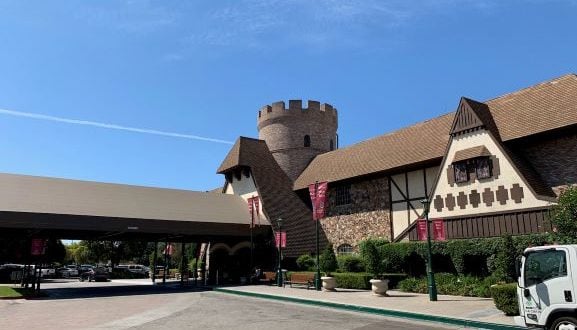 The 2019 D23 Expo was held in Anaheim on August 23 through 25. It’s a bi-annual convention, and it takes place at the Anaheim Convention Center, which is very close to Disneyland. Since my daughter and I were covering the convention for Disney Dining and Disney Tips, we needed a place to stay. Anaheim Majestic Garden Hotel offered to host us for our four nights in Anaheim. Here is my review.

I’ll start with the hotel itself. It’s a historic property, it is celebrating its Golden Anniversary this year. Just because it has been around for a while does not mean that it is not full of modern conveniences. The building is designed to resemble a castle. That theme continues inside. You’ll find suits of armor, pictures of dragons, and tales of Princess Corrine. You can even meet the princess yourself while you’re there, she is easy to find.

We stayed in a Standard King Room. There was a king sized bed, and a pull out sofa sleeper. I was surprised by how large the room was. There was a sitting area where you first enter! Our room was on the first floor, and we had a second door that led out to the rose garden. The room was clean, and except when the Disneyland fireworks went off it was quiet. I never heard people walking one floor up. The bed was comfortable. I will sometimes have a hard time sleeping the first night when I travel, but that did not happen during this trip.

Speaking of those fireworks, the view was incredible! When we heard them going off we went out the back door to our room and watched them from the rose garden. I heard that there is an even better view from the front of the hotel, but this worked for us.

Our flight to California was extremely late, and our dinner plans ended up falling through. My daughter and I decided that the easiest thing to do was to try Garden Bistro Court. We were not hosted for the meal, and we were both pleased with the choice. We ordered a burger and a sandwich, both came with sweet potato fries. Our waiter was friendly and attentive, without going overboard. He had no idea that we would be reviewing the hotel, he just wanted to give us exceptional service. The price was reasonable.

We also ordered from California Deli for breakfast one day. There were a lot of choices. We were just looking for cereal and soy milk, which they had. If we had wanted something more that would have been possible as well. You can also get sandwiches, salads, and the like for lunch and dinner, and there are plenty of snacks for sale.

A new restaurant, Hangai, will be opening later this year. I will have more information on that for you soon.

The staff members at Anaheim Majestic Garden Hotel were all friendly. Some of the people knew who we were, but most of them didn’t. That never once stopped them from smiling and saying hello. If we had a question, it was easy to get an answer.

Anaheim Majestic Garden Hotel is not far from Disneyland, and there is a free shuttle that will take you to and from the entrance. Park Hopping is easy at Disneyland, since the two parks and Downtown Disney are all within walking distance of each other. The shuttle leaves the hotel at the top and bottom of each hour, and then picks people up at Disneyland at :15 and :45. The only hiccups of our stay were with the shuttle, and these hiccups were minor. The shuttle drivers were friendly, and sometimes they would point out landmarks or tell jokes. The shuttles were comfortable as well.

If you don’t want to take the shuttle, you don’t have to. Anaheim Majestic Garden Hotel is close enough to Disneyland that you can walk if you’d prefer. We did walk once, and it was easy. I wouldn’t have wanted to walk all the time, especially at night, but it was fine to do it once.

I was lucky enough to have a long conversation with Cindy Smith, who is the Director of Sales and Marketing. Cindy has a true love for what she does, and her pride in the hotel shows. She told me about some of the extras that they do at Anaheim Majestic Garden Hotel. Some of the activities that were mentioned were movies under the stars with Princess Corrine, goat yoga, and holiday activities. She explained that they are always looking for new and exciting experiences for their guests. Meeting Cindy was one of the highlights of our stay, she has a personality that makes you want to smile.

Another area that I would like to comment on is housekeeping. I’ve stayed in hotels where they barely do anything. I’ve been at other places where they move all of your stuff. The housekeeping staff at Anaheim Majestic Garden Hotel did it just right. Our room was cleaned, but nothing was misplaced by the staff. They were also quiet, I never heard them in the halls.

Part of the fun of staying on property at Walt Disney World is that the hotels are all themed. Staying on property at Disneyland is a lot harder to do, since there are only three hotels. Anaheim Majestic Garden Hotel has the feel of a Disney owned property because of the castle theme. The rose garden and the Koi pond add to the fun. The rooms are large and tastefully decorated, the lobby is attractive, the food is great, and the staff is exceptional. I highly recommend Anaheim Majestic Garden Hotel, and look forward to staying there again the next time that I’m in Anaheim.