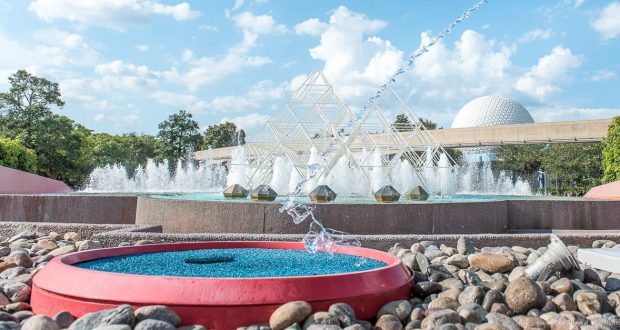 6 Interesting Things To Experience At Epcot In Walt Disney World

Walt Disney World’s Epcot is always one of our favorite parks to visit. It has something for everyone, and there’s no shortage of attractions. Having been to Epcot numerous times, we thought we’d seen everything, but Disney continues to surprise us, as we discover new and exciting adventures and facts about the park. Here are a few interesting things to experience at Epcot!

One of our all-time favourite experiences in Epcot was accidentally stumbling upon a gathering of random, rare Disney characters while in the world showcase, and lining up to have our photos taken with them. Only later did we realize we’d been lucky to come across a character training meet and greet. There’s no way to know when or where you’ll find one, as they’re unadvertised and move around, but if you see them, make sure you stop and line up for each character and grab some valuable shots with these scarce Disney faves! Some possible locations for character training include behind Innoventions, the Fountain of Nations stage area, the International Gateway, the area to the left of the American Adventure gates, and World Showplace gates (between the UK and Canadian pavilions). Character training happens regularly, so keep your eyes peeled, as you may never have a chance to see these characters anywhere else in the parks. Characters we personally saw included the Genie, Brer Bear, Lanchpad McQuack, Baloo, King Louie, Terk, and Mr. Smee. Other possible character sightings include Rafiki, Wendell, Brer Fox, Big Al, Cruella, Jane, Mad Hatter, and Queen Grimhilde, and many, many more. Don’t dawdle if you do run into a character training meet and greet, because the characters never stay for long!

Located in Future World, Flavors of Club Cool is the place to go if you’ve ever wondered what soft drinks are popular in other countries. Club Cool offers free samples of various soft drinks from around the world. It’s sponsored by Coca-Cola, and also sells Coca-Cola merchandise. A great place to go on a hot day, it’s also great for bragging rights, because there are only a couple of other locations in the entire USA where you’ll find these regional sodas. So, if you’ve ever wanted to sip Peru’s sweet, fruity “Inca Kola”, or try Japan’s health soft drink “Vegitabeta”, or maybe enjoy the caffeine-free “Fanta Pineapple” of Greece, all without needing your passport, and all for free, you’ve come to the right place! (Note: Italy’s “Beverly” drink is a must-try, because with its bitter taste, it’s likely the most disgusting beverage you’ll ever drink – go on, try it – we dare you!!)

The Moroccan pavilion is our favorite for pure aesthetics. It’s just beautiful, and makes you feel like you’re actually on the streets of or in a marketplace in Morocco. While admittedly part of that feeling is due to the lovely smell of incense that wafts through the area, much of it is because of the stunning mosaic artwork that fills the pavilion. There are plenty of spots to stop and enjoy a quiet moment, while taking in the intricate tile work. Though it’s not common knowledge, the Moroccan government sent numerous artisans to Walt Disney World’s Epcot to design and create the mosaic artwork. If you look closely, you’ll see that there are cracks or flaws in some of the tiles. No, this isn’t an oversight, or a result of damage; it’s intentional. Muslims believe that only Allah can create perfection, so the Moroccan artisans, infusing the pavilion with their cultural beliefs, purposely created imperfect tiles so that every mosaic is, by design, “flawed”.

Test Track, one of the fastest rides ever built in Walt Disney World, is also one of the most popular. Kids and adults alike enjoy designing their own cars and testing them out on the ride’s testing ground. But after you’ve created your car and have ridden Test Track to see how it performed, don’t hurry on to your next FastPass quite yet – there’s more fun to be had with your creation! Your MagicBand is your link to your design, and you can use it to play a variety of games in the post-ride showroom. You can see your car star in its own tv commercial, or race it on a virtual track. Score your creation against the designs of other guests, and check out the awesome Chevrolet vehicles, including concept cars, and pose for photos with them. Or take advantage of green screen technology, pick a background (“under the sea” is a fun one!), and pose for a photo that your design will be inserted in. You can even have it emailed to you, and you’ll have a memento of you with your creation!

Of course we’re all familiar with the stunning “dancing fountain” in Future World, on the plaza behind Spaceship Earth, near Mouse Gear and Starbucks. You can’t miss it, as you’ll hear the music and see the synchronized water show a mile away. Make sure you come by after dark, to view the dramatic evening lighting; at Christmas time, the music and water take on a holiday theme.

But did you know that there’s a much less well-known water feature, an interactive one, that just might be even more fun? Nearby, outside Disney & Pixar Short Film Festival, you’ll find our favorite fountain on Disney property: a “leap fountain,” where the water leaps – as if alive – from fountain to fountain, over the heads of guests. Though it’s not fountain you can play in, you CAN follow the water as it leaps around, and try to catch it as it falls. This is obviously especially fun on a hot day. The most fun of all may be strategically placing an unsuspecting friend or family member beside the feature, blocking the fountain’s path as it leaps around; wait a few seconds, and they’ll be drenched as the leaping water soaks them en route to its next fountain. (I tried this with my significant other the last time we were in Walt Disney World’s Epcot, and she was thrilled – and soaked.)

1. Eat Your Way Around the World

There are abundant excellent sit-down and quick service restaurants at Walt Disney World’s Epcot Centre, including fantastic restaurants in the various worlds showcase pavilions. But however tempted you might be, my advice would be – don’t stop for a full meal during the day. Instead, try eating your way around the worlds. Choosing just one restaurant would be unfair to yourself, given the plethora of options available to you. (This is especially true if you are lucky enough to be visiting the park during Food and Wine Festival, when you can sample wine and food at special kiosks at each country.) Every country in the world showcase has culinary options that must be tried. Most countries have small carts outside their pavilion so that you can enjoy a grab and go option. Or you can try snacks at the various bakeries, restaurants and shops at your favorite countries. Our personal favorites? Werther’s caramel treats at Germany’s Karamell-Küche; out of this world ice cream and sorbet at France’s L’Artisan des Glaces (topped with Grand Marnier, vodka or rum); and baklava at Tangierine Café in Morocco. So, avoid the temptation to fill up on a big meal, and treat yourself to a smattering of treats from your favorite countries throughout your day at Walt Disney World’s Epcot.