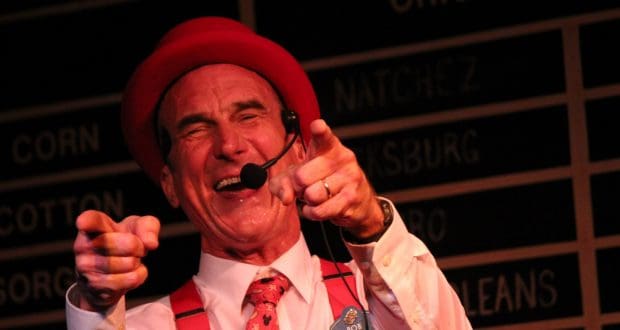 Do You Know These 6 Perks About Disney’s Port Orleans Resort – Riverside?

Port Orleans Riverside Resort in a Moderate hotel at Walt Disney World in the Disney Springs area. As the hotel is on Disney property, its guests can take advantage of perks like Magical Express, Extra Magic Hours, early Fastpass+ reservations, and the Disney Dining Plan. Most guests know about these perks, and even about the Royal guest suits. But you probably don’t know these six things about Port Orleans Riverside.

Ye Haa Bob, a performer at Port Orleans is probably one of the worst kept secrets in Walt Disney World. The shows have been running a long time (since 1997), so there’s no reason to be in the dark about it, and yet so many folks miss out. Find Bob in River Roost Lounge, outside of Boatwright’s Dining Hall, Wednesday-Saturday evenings. Ye Haa Bob performs a piano sing-along show with lots of audience participation, so bring your good spirits! It may be in a lounge, but this is fun for the whole family!

Guests can enjoy a leisurely horse-drawn carriage ride around Port Orleans. A carriage ride combined with dinner and drinks at Boatwright’s Dining Hall makes for a wonderful date night. Since Port Orleans is a little farther from the theme parks, the resort tends to be much quieter, with fewer casual guests, and that means a carriage ride here will be a peaceful way to relax in the evening. I think it the ride is particularly enchanting at Christmastime. Something about Christmas and carriage seem to go perfectly together.

The lobby and registration area is themed after a real life river boat. Look around and you’ll find ports of call, including St. Louis, Memphis, Vicksburg, Riverside and French Quarter. You can also find Hidden Mickeys near the ports of call. The lobby really sets the stage for the rest of the resort’s theming around the river. The theming at Riverside works in conjunction with Port Orleans French Quarter. There, the theming is of the city, as guests move up river, they discover the old stately mansion of an antebellum south, before moving into the countryside in Alligator Bayou. The theme moves from city to country.

The river and waterways are an integral part of the Port Orlean’s theming, both at Riverside and French Quarter. Sassagoula is a Native American term for the Mississippi River, so the man made Sassagoula in Port Orleans is actually meant to be the Mississippi River. Coming in at two and half miles long, the Sassagoula River begins in the Riverside Region, runs past French Quarter and the Saratoga Springs Resort before finally ending at Lake Buena Vista. A fleet of fifteen river boats transport guests from Port Orleans Riverside to Disney Springs via the Sassagoula River.

In the middle of Sassagoula River sits a three and a half acre island. The island features the resort’s main pool and a ninety five foot long water slide. Ol’ Man Island is also home to the largest oak tree to ever be transplanted. This eighty five ton behemoth took over three days to move from its original home thirteen miles away. Guests can fish on Ol’ Man Island too. Just behind Muddy Rivers Pool Bar is a fishin hole stocked with catfish, bass, and bluegill.

The idea for a New Orleans themed resort was kicked around as early as the 1980s. When the Empress Lily opened in Disney Springs (then called Lake Buena Vista Shopping Village) the plan was to incorporate a highly themed, moderately priced hotel to accompany the riverboat restaurant. Buildings around the Empress Lily were to be themed as warehouses and other such dockside buildings, with stores and restaurants on the ground floor, with guest rooms on upper levels, very much like the arrangement at Boardwalk Resort. This early concept was scrapped due to low crowd levels, high cost of building Epcot, and disputes amongst Disney executives. But good ideas never die at Disney. After the success of Caribbean Beach Resort, Walt Disney World’s first Moderate hotel, the company returned to the idea of the New Orleans themed hotel. The resort, then called Dixie Landings, opened on February 2, 1992 first with the Alligator Bayou section, and the Magnolia Mansion shortly thereafter.

What do you love about Port Orleans Riverside? Let us know!

2016-06-13
Robin Swanson
Previous: 10 Experiences You Might Not Have Tried Around Hollywood Studios
Next: 10 Must Pack Items for a Trip to Walt Disney World