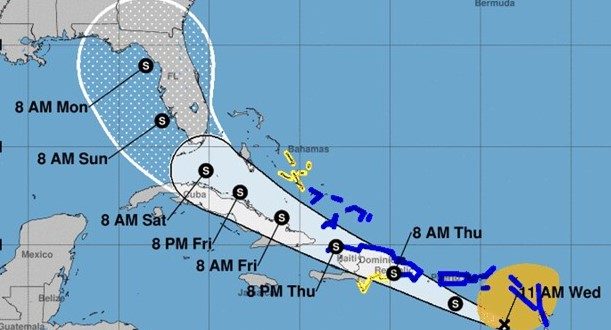 We continue to keep an eye on the Atlantic coast storm as residents and Walt Disney World travelers should remain alert this weekend.

As shared by OrlandoSentinel, Potential Tropical Cyclone Nine has yet to become a tropical storm, but Florida still lies in its projected path and it’s expected to make landfall by the weekend, the National Hurricane Center said in its 11 a.m. Wednesday update. If it develops, it will become Tropical Storm Isaias.

The storm is moving at 23 mph with maximum sustained winds of 45 mph and is about 240 miles away from San Juan, Puerto Rico, the NHC said.

The system is still trying to organize as its center is still too poorly defined to be considered a tropical storm causing it to move toward a more westerly track than originally predicted, said FOX 35 meteorologist Jayme King. “This could eventually cause it to remain weak, whatever it turns into, forcing a more westerly track longer term,” King said.

Florida is in the forecast cone, but the NHC said details of the long-range track remain unclear because of a lack of a defined center. Projections show the center of the storm is now likely shifted over to riding up Florida’s west coast.

The NHC gave a 90% chance of the system developing into Tropical Storm Isaias over the next two to five days.