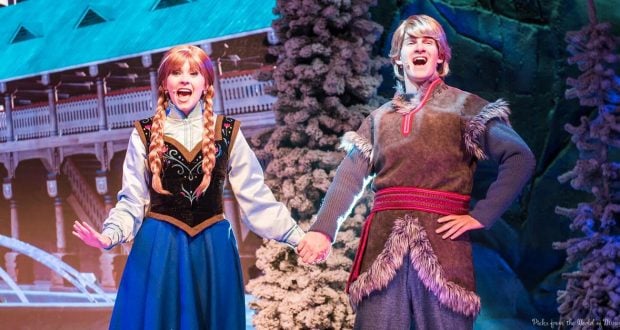 Getting Your Frozen Fix at Walt Disney World

November 27, 2013 forever changed many things—for Disney, for kids of all ages all the world over and for the box office too. That’s the day that the entire world was introduced to Frozen, Disney’s 53rd animated feature film, inspired by Hans Christian Anderson’s The Snow Queen, that tells the story of a young princess and her fearless search for her sister, the queen, who runs away after the townspeople discover she has a curse on her that makes everything she touches turn to ice. But as with many things Disney touches, this film became a box office smash, earning $1.2 billion in worldwide revenue, thus making it the highest-grossing animated film of all time and the 13th highest-grossing film (of any kind) of all time! Disney Imagineers wasted no time bringing Frozen to the parks at Walt Disney World, so if you’re a fan who just can’t get enough Frozen, you’re in luck! Here’s how to get your fix when you visit the parks.

8. Meet Anna and Elsa at Epcot.

At the Norway pavilion on the World Showcase at Epcot, you and your family can meet the regal duo from Frozen at Royal Sommerhus—their countryside cabin. The queue winds through the cabin, which is decorated in true Frozen style. Once it’s your turn to say hello, you’ll be able to chat with Princess Anna and Queen Elsa, ask them to sign your autograph book and even pose for photos with them! Royal PhotoPass photographers are on hand to capture the magic of your meet-and-greet as well!

Although at present you can’t meet Princess Anna or Queen Elsa at Magic Kingdom, you can see them every afternoon at Magic Kingdom during the Festival of Fantasy parade. The royal sisters are together on the back of one of the princess-themed floats toward the beginning of the parade, so don’t miss them! Be sure to wave and have your camera ready to take pics as they wave back to you. 6. Experience Frozen Ever After!

This fun ride took the place of the Maelstrom ride at the Norway pavilion at EPCOT. On this dark ride aboard a Norwegian vessel, you’ll see Anna, Elsa, Sven, Kristoff, Hans and Olaf in their audio-animatronic forms. In fact, this ride boasts some of the latest audio-animatronic technology developed by Disney Imagineering. The movements of the robot characters are incredibly fluid and lifelike thanks to this technology. The ride takes Guests on a tour through Arendelle. There’s even a 28-foot drop toward the end of the ride. You’ll need a FastPass+ time for this attraction, especially during peak seasons in the parks. Even two years later, the ride is incredibly popular among parkgoers!

You can even meet the lovable snowman Olaf at Disney World. At Echo Lake at Disney’s Hollywood Studios, you can head to the Celebrity Spotlight near the Hyperion Theater and meet your favorite frosty friend from Frozen (say that ten times fast!). Olaf poses for pictures, meets Guests and even signs autograph books, so don’t miss your chance! In the Norway pavilion at EPCOT, you can also visit the Wandering Reindeer shop, where you’ll find all sorts of Frozen-themed merchandise for purchase. Find Anna and Elsa costumes, clothing, accessories, plush dolls and animals, toys and more.

Another exciting Frozen-themed attraction is at the Hyperion Theater at Echo Lake at Disney’s Hollywood Studios. “For the First Time in Forever—A Frozen Sing-Along” takes place several times throughout the day at the Hyperion, and it’s a show full of humor, music and even a big surprise ending! The story of Frozen is told by two royal historians from Arendelle who also serve as comedians! Scenes from the movie are shown, and Guests are invited to sing along with the music from the feature film! Anna, Elsa and Kristoff make appearances too! Don’t miss it! If you’ve ever been to Disney World, you know that candy caramel apples abound in great numbers all over the parks and at Disney Springs. Many of those candy apples are decorated to look like Disney characters, and since Frozen came to the parks, the Olaf candy caramel apple has been in high demand! Sink your teeth into a juicy green Granny Smith that looks just like the lovable snowman. They’re almost too cute to eat. Almost. Find one at any location that sells candy apples in the parks.

Looking for even more yummy Frozen options? Frozen takes center stage of Epcot’s nighttime dessert party! Still serving desserts, alcohol and non-alcohol beverages, and offering a reserved viewing area for Epcot Forever, everything has shifted to a Frozen-inspired theme. The treats even feature favorite Frozen characters! Plus, guests will be escorted to the very popular Frozen Ever After attraction for an included ride with no wait. Reserve your spot well in advance and expect to pay around $99 per adult and $59 per child.