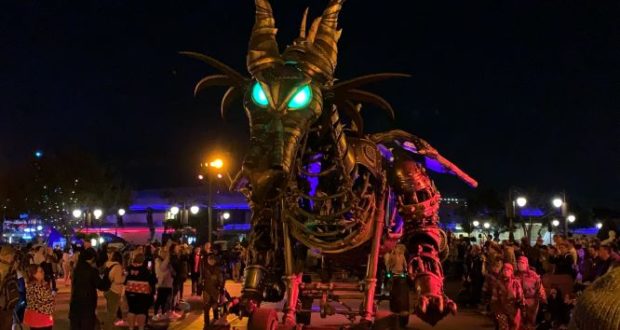 Disney Villains After Hours Has Returned for 2020

In 2019, Disney Villains After Hours debuted at the Magic Kingdom. It ran only ten times. It featured all of the fun of regular Disney After Hours, but it also had some enhancements. I attended the first one and I was impressed by the event. Disney villains After Hours is back, and it will take place many more times in 2020. I attended the first edition of the new and improved version. I was even more impressed this time.

My daughter and I were part of a hosted media group on Friday, February 7. We started at Disney’s Contemporary Resort, where we saw some of the special event-only merchandise. There are of course T-shirts and MagicBands, but you will also find jewelry, pins, and even leggings. Oogie Boogie fans will be happy, because he is available as both a sipper and a popcorn bucket. There is another reason why Oogie Boogie fans will be happy, but more on that in a bit.

We also had a chance to see the foods that are for sale only during the event. Some of these items are so creative that you might feel for a moment like you are at the Epcot International Festival of the Arts. Painting the Roses Red is a cheesecake mousse. Just Take Three is a trio of beignets. Royal Majesty is a strawberry cake pop. These are just a few of the choices.

There was a raffle while we were at Disney’s Contemporary, and the winners were able to have a makeover by Character Couture. This is an extra at Walt Disney World that I love. If you’ve ever wished that you were the right age for Bibbidi Bobbidi Boutique, you might want to check this out. With Character Couture, the hair and makeup artists will create the look that you want. Nails can be added for an additional charge. You can base your look on a Disney character, or just give an idea and they will work to create the look that you want. This is perfect to create a look for Disney Villains After Hours or Mickey’s Not-So-Scary Halloween Party, but it also works for Disney Bounding. You can also do it just for fun. If you’d like to make an appointment for Character Couture, call 407-WDW-GLAM (407-939-4526).

The actual event started at 9:00pm. Make sure that you are in the front of the park, near Cinderella Castle, at that time. Disney Villains After Hours starts with the transformation of the castle, and it is something that you don’t want to miss.

Villains Unite the Night is the stage show that takes place on the stage in front of Cinderella Castle. It’s held at 10:00, then again at 11:30. I forgot how good this show is. The story is simple, Hades thinks he’s about to fulfill a prophecy and take over the universe, but four other villains think the same thing. What blew me away this time, though, was the quality of the projections on Cinderella Castle. When each new villain appears, he or she makes the castle their own. I enjoyed this show much more this time than when I attended last year, and I liked it back then.

Last year Maleficent roamed the route from Frontierland to Main Street, U.S.A. This year she’s back, but she’s proceeded by some friends. (Do villains really have friends?) It’s called Villains Cursed Caravan. It’s kind of a mini-parade. You’ll see Gaston on horseback (a shout-out to whoever was playing the role, because he was fantastic!), Cruella DeVil, and a few other baddies. This is where Oogie Boogie fans will want to be. Another highlight, besides Maleficent, is Ursula. You have never seen her like this before!

If you’re attending Disney Villains After Hours, you can enter the park as early as 7:00pm. I would advise you to do that, especially if you want to hit a few rides. Ride the ones with short Wait Times then, so you won’t use your special event time for those attractions. The only “long” line that I saw all night was for Seven Dwarfs Mine Train, and that was only 20 minutes. Still, with the extra entertainment, you might find that 20 minutes is longer than you want to wait.

There are three rides that I want to mention. Pirates of the Caribbean is enhanced for the event. There was a female pirate in the line, talking to people as they went through. (She told us to say goodbye to the people in front of us, because they were not going to make it as pirates.) There were also two places in the ride itself where pirate actors called to the people on the boats. The extras are always fun.

The second ride is Space Mountain. This has a special theme for Disney Villains After Hours. It is pitch black for the entire ride. The usual soundtrack is turned off, and instead you can hear famous lines and laughs from various villains. Somehow Space Mountain feels like it goes faster when it’s totally dark. It is a great change.

The third ride that I want to mention is Haunted Mansion. This does not have a special overlay, but it did have a special Cast Member. He initially opened the doors dramatically, enough so that I will admit that I jumped. He then was creepy and mysterious as more people entered the first room. Since there were only about ten of us in the stretching room, he decided to have some fun. He stayed in the room with us, and circled the group as the narration played. He waited until the room went totally dark, then stood between two people without them knowing, to purposely scare them. It worked. This gentleman was fantastic. I first rode the Disneyland version off Haunted Mansion when I was nine years old, and I’ve ridden both versions dozens of times since. This was my best ride ever; because of this Cast Member.

Even when it was time to leave Disney Villains After Hours, the fun was not over. A group of villains watched the crowd from the Main Street, U.S.A. Train Station. They wore mics, and they heckled the guests below. They told everyone to leave and to go home, it was a far cry from the Kiss Goodnight that you will normally see at the Magic Kingdom. Again, Gaston was a standout here. He would flex his muscles, because he assumed that’s what we were waiting for. He would also pick certain people who could stay, while he told others to leave. He was very entertaining.

Disney Villains After Hours was good last year, but it’s even better this year. Like the other Disney After Hours events, it includes ice cream novelties, popcorn, and bottled drinks in the price. You will see plenty of characters, but there are no meet and greets with villains. If you’re looking just to ride as many things as possible, you might want to save a few dollars and buy a ticket for the regular Disney After Hours. If you want some great entertainment and unique pictures of Cinderella Castle, Disney Villains After Hours should be your choice. It runs on select nights, now through July 10.