Two New Renderings Give an Update on Disney Springs

The construction continues at Downtown Disney. The area is still open during the transformation to Disney Springs. Recent changes include the addition of two Starbucks, new kiosks for both Haagen-Dazs ice cream and Wetzel’s Pretzels, and Marketplace Co-op.

Two new renderings have been released by Disney Parks Blog, which will give you a glimpse of what the traffic and parking situation will be like. Traffic is always a concern in the area, so Lake Buena Vista Drive will be widened from seven lanes to ten lanes, to help ease some of the congestion. The drawings also show one of two multilevel parking garages that are planned for Disney Springs. The garage that is pictured will have 4000 spaces, and it is expected to be operational in late 2014.

The plan includes two pedestrian bridges, one in Marketplace and the other in West Side. The renderings also show a new I-4 interchange, so that it will be possible to exit the Interstate and proceed directly to Disney Springs.

The first new section of Disney Springs, called The Landing, is expected to open in 2015. The project is slated to be finished in 2016. 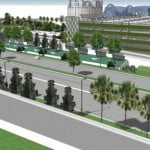 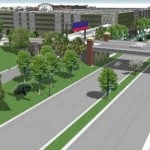