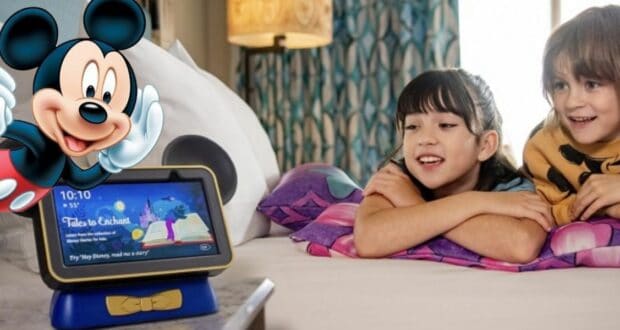 Visiting Walt Disney World as a Resort Hotel Guest? Take note, as Disney has revealed, it is beginning to test its brand new “Hey Disney!” feature via the Alexa platform.

As shared below by @ScottGustin, Guests currently staying at Disney’s Polynesian Village Resort have been informed “Hey Disney” testing has officially begun at the Deluxe Hotel:

Disney previously announced this new feature was on the way to its Resorts, but this is the first testing we have seen. Here’s one of the first announcements of the Amazon Echo device from September 2021:

With a simple “Hey Disney,” Guests can ask the in-room Alexa to set a wake-up call message with Mickey Mouse and friends, order more towels to arrive in their room, ask “Hey Disney” to tell jokes, Disney trivia, and stories, as well as experience interactive experiences with characters from Disney, Pixar, Star Wars, and the Muppets.

Furthermore, if you don’t have the My Disney Experience App pulled up at the moment on your phone, “Hey Disney” can easily answer Disney Park questions. Guests can ask the Alexa things such as, “Hey Disney, when is Disney’s Animal Kingdom closing today?” and “Hey Disney” will respond with the answer.

With “Hey Disney” featuring the Amazon Alexa platform, are you a Disney Resort Guest that wants to have Disney listening into your conversations… just awaiting the “Hey Disney” words?

The good news is while many Resort Guests will enjoy this addition, Disney has said this complimentary feature is also an OPTIONAL new Guest perk.

Check out all the details here about this latest in-room technology, “Hey Disney!,” coming soon to all Disney Resort Hotels.

2022-11-29
Jamie Sylvester
Previous: Disney Disappoints by Retracting Promise of Parking Tram Return
Next: Tim Allen Arrested on Drug Trafficking Charges Years Ago, but Haters are Having a Heyday Today