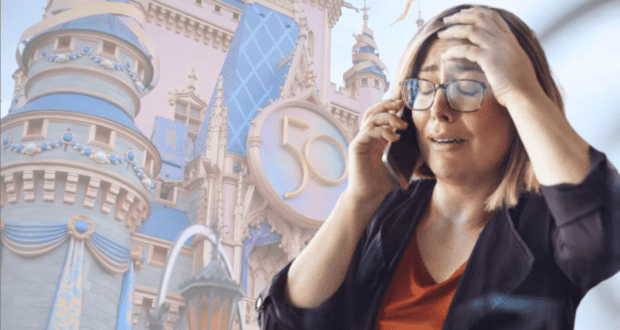 Disney ignores Guest & refuses to respond after tragedy left her family unable to visit Disney World. Until a major news organization got involved.

A woman in New Hampshire was forced to cancel her disabled daughter’s dream trip to Disney World after the pandemic left the family unable to travel, but her attempts to reach out to Disney about her options when canceling were ignored–until a major news organization stepped in to help.

Jacky Sullivan, a Disney fan and Brentwood, New Hampshire resident, says her daughter Becky has always loved Disney films. In fact, Jacky says that the beloved Disney films have played on a television in Becky’s room 24 hours a day, seven days a week since Becky was two years old.

Becky has autism and is non-verbal, and she loves to watch Disney movies. So one day, her mother Jacky decided that it was time to take Becky on a family vacation back to the Walt Disney World Resort. Becky would be able to see her favorite Disney characters at each Disney World theme park.

“Disney movies twenty-four-seven on the screen in her room since she was like two years old, and she’s 27,” Sullivan said. “So, we’re like, let’s do the Disney trip we always dreamed about doing with her.”

According to NBC Boston, Jacky made a Disney World vacation reservation for September 2021 for seven Guests: six family members and a support nurse for Becky to help her while she was at the parks, purchasing a theme park ticket for each Guest. But when the Delta variant of the coronavirus created a massive wave of new COVID infections nationwide, Becky’s mother Jacky knew they would need to postpone their dream trip.

So she moved the reservation to March 2022, hoping that the wave of new infections would subside by then.

But by March, Jacky says the family had lost their support nurse who was originally booked on their trip to Disney World, and because of staffing shortages related to the pandemic, Jacky was unable to find a nurse who could accompany them to Florida. Jacky says in addition to not having a nurse for her daughter, she began to realize that Becky had regressed socially because of the difficulties brought about by the new wave of the coronavirus pandemic.

READ ALSO: Disney WILL NOT issue refunds to Guests who cannot visit because of COVID

“[People with autism] like routine, and if you keep them in that routine, then they keep going because that’s what they do,” Jacky explained. “If you take that routine away, they go back to where they are safe and comfortable. We didn’t realize how far the regression of what she’s doing and capable of doing, or willing to do, how far it regressed until we stopped and went, ‘Wait a minute; what are we doing?'”

Needless to say, Jacky knew a cancellation of the trip to Disney World was on the horizon.

Following that very difficult decision, Jacky says that she tried to contact Guest Relations at Disney for weeks in an attempt to explain her unique scenario and inquire about her options for a cancellation refund or a credit toward another trip. She needed to know if there would be a cancellation fee. But she says that her continued efforts to contact Disney–by phone and email–were to no avail.

RELATED: A bad break-up leads to a “where’s my vacation” Disney trip nightmare

“Nothing, nothing,” Jacky said. “Nobody picks up the phone. But somehow, I got through to a message where you could leave a message. No response. Emails, no response.”

Jacky says no matter what she tried, she was unsuccessful in making contact with Disney Guest Relations.

“I’m telling you, we tried every which way to get a hold of them and couldn’t get anywhere,” she said.

As a last resort, Jacky decided to reach out to a news station, NBC Boston. She contacted their NBC Boston Responds initiative and shared her story with them.

The news organization sent an email to Disney on behalf of Jacky Sullivan, and just like magic, Jacky received a phone call from Disney the very next day. More importantly, Jacky received a full refund for the purchase price of her trip: $2,200.

It’s still unclear why no Cast Member with Disney Guest Relations ever responded to Jacky’s many phone calls and emails, and attempts by NBC Boston to contact Disney to inquire about the situation were unsuccessful. But it’s very clear how Jacky feels about NBC’s help and about her refund.

“I can’t believe how quickly you guys managed to get everything refunded; that was amazing,” Jacky told NBC Boston. “The whole thing is sad, right?  So, you know, at least we managed to get the money back. That’s a little bit of a good outcome from the whole thing, so thank you very, very much.”

Here’s hoping Jacky and Becky can return for a Disney vacation very soon!

2022-07-20
+Becky Burkett
Previous: Walt Disney World Vacation Tips That the Pros Use
Next: ABC’s Live-Action ‘Beauty and the Beast’ Special Has Cast Its Belle!