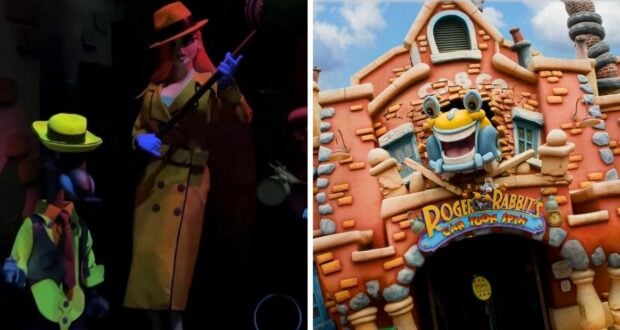 In 1994, Disney opened a brand-new ride in Mickey’s Toontown at Disneyland Resort based on the incredibly popular 1988 film Who Framed Roger Rabbit, which starred Christopher Lloyd and Bob Hoskins. Roger Rabbit’s Car Toon Spin takes Guests on a trip through Toontown as they ride in runaway cabs and see sights like the Gag Factory and Bullina’s China Shop. The attraction may be 27 years old, but it remains incredibly popular with wait times averaging about 45 minutes — more on busy days. 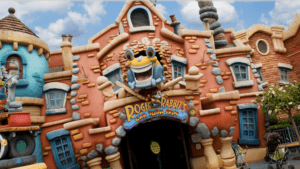 For years, the ride stuck to a more traditionalist telling of the movie. Roger and his wife Jessica were the main characters who were kidnapped by Judge Doom’s gang of weasels, with Jessica Rabbit always wearing her famous sparkling red dress, red high heels, and purple gloves. However, as times have changed, so have people’s perceptions of how Jessica is portrayed. Disney decided to make the ride more modern and made some big changes to the famed wife of Roger. 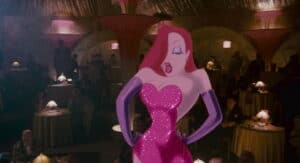 On December 10, Instagrammer thecalibae shared pictures revealing that Detective Jessica Rabbit has made her Disneyland debut. Detective Jessica now wears a tan trench coat — but if you look closely, her red dress can still be seen. She also wears a fedora and keeps her purple gloves to look just like a 1940s detective — which is the era that the original film takes place in. 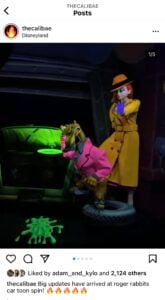 Citing the recent return of the Toon Patrol Weasels as the main driver behind the recent sharp rise in crime statistics throughout Mickey’s Toontown, Jessica Rabbit has determined it is past time for her to throw her fedora into the ring by starting her own private investigations service, while taking inspiration from longtime friend and legendary toon detective Eddie Valiant, Jessica shows that she certainly means business.

Jessica’s fabled acting career has made her one of the most recognized stars in the maroon cartoon family of performers. Now she is using her celebrity to speak out!

“Enough is enough,” Jessica was heard exclaiming last week. ‘The good toons of our neighborhoods are afraid to come out at night, and it is getting worse by the day! Those weasels are up to something big… I am going to find out what it is and put a stop to it!”

Watch out weasels, your reign of terror is over! 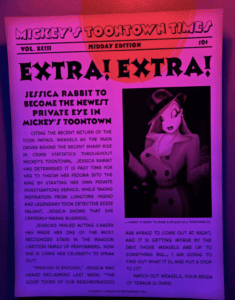 Detective Jessica Rabbit is not the only change being made to Mickey’s Toontown, the whole area is undergoing a major overhaul. Mickey and Minnie’s Runaway Railway — which opened at Disney’s Hollywood Studios in 2o20 — is currently being built in the area and is scheduled to open in 2023. Toontown will fully close in March 2022 as construction begins on CenTOONial Park and Disney works on creating a greener, family-friendly area.

What do you think of the addition of Detective Jessica Rabbit?