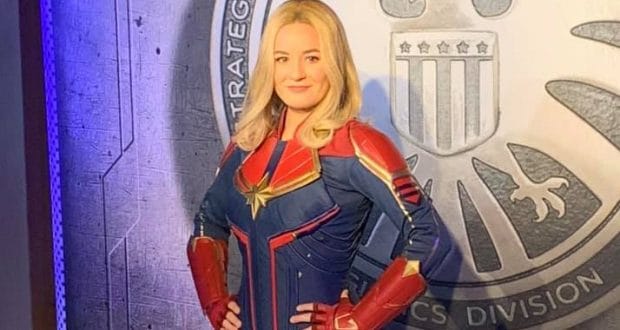 Today we saw land again! We started the morning by seeing the Cayman Islands in the distance. The sun was rising, and the whole thing was unforgettable. We didn’t have a lot of time, though, because we had a busy day planned. Today was the day that our media group had some fun meet and greets planned. We first got to meet a group of princesses. This is a free meet and greet, but you need to have a ticket for it. You can sign up when you’re planning your cruise. After meeting the princesses we moved to a different area, where we were able to meet Anna and Elsa. This was a fun meet and greet (kudos to Anna for having a blast) but the lighting wasn’t good so the pictures turned out dark. This one also requires a ticket. A couple of days ago the incredible people who arranged the media parts of the cruise told us about a surprise that was planned for today. We were to meet Captain Marvel in one of her first ever appearances! This was exciting, because so little is known about her at this time. It was a lot of fun. Captain Marvel seemed to be having as great a time as we were. After the media events had finished up we grabbed something to eat, then headed to Grand Cayman. Since there is a coral reef around the island, there is no dock for cruise ships. This meant that everyone went to shore on a tender boat. It’s a local company that operates the boats, not Disney. There was such a difference between being on the cruise ship and being on a small boat! It didn’t take long for us to arrive. We didn’t do much when we arrived at Grand Cayman. There is a shopping district right there, so we walked around a bit and took in the sights. There wasn’t anything that really grabbed our attention. There is a beach that we could have taken a van or taxi to, but it was hot and we’ll have a beach day at Castaway Cay on Thursday. We didn’t stay too long, we decided to get back on a tender boat to head back to the Magic. I’m glad we went, but this isn’t going to be the part of our trip that we talk about for years to come. Tonight was Pirates in the Caribbean Night. This included a special menu (we were once again at Lumiere’s), special activities, extra characters, a deck party, and fireworks. Everyone was given a pirate bandana, and plenty of people were in costume. The deck was packed, and the crowd was ready to celebrate. There was a stage show where several classic characters were dancing, but then it was taken over by Captain Hook and his gang. Of course Mickey flew in to save the day, literally. The show ended with the fireworks. While the fireworks weren’t on the scale that you’ll see at Walt Disney World, there is something special about fireworks at sea. After the fireworks my family and I headed to the Walt Disney Theater. We were in for a treat there tonight. There is an act called Junnk (with a double “n”) and they were fantastic. The show was mostly percussion, but it also included dancing, acrobatics, and comedy. The high energy level of the four performers was contagious. Many people skipped the show tonight, and it was there loss because we enjoyed every second.

Tomorrow is going to be a fantastic day. We will be enjoying Marvel Day at Sea. I can’t wait to share the experience with you.