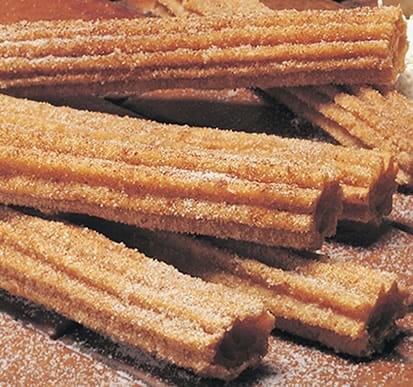 Churros Have Come Back to Animal Kingdom at Walt Disney World

Churros are a fan-favorite treat at Walt Disney World.  They aren’t quite at Dole Whip level for some, but they are pretty close!  The churros are now back at Disney’s Animal Kingdom for purchase at Dino Bites Snacks in Dinoland, U.S.A.  The price for a churro is $4.29 and includes chocolate sauce.

If you don’t know what a churro is, it is a long doughy type of treat that has been fried and then covered in cinnamon sugar.  They are soft and sweet when you bite into them.  Since they are so long and thin, they are easy to hold and still walk and snack on them if you are in a hurry.  These used to be served at Animal Kingdom, but had been discontinued in February 2016.  We are glad to see them make their way back to the park!

Animal Kingdom is a great park, but can sometimes be a bit overwhelming. It’s huge! There is so much fun to be had and places to explore that we don’t always know where to start. If you’re finding yourself in this position, here are my eight things that I think you should definitely do when you arrive at Disney’s Animal Kingdom Park.

We tend to often take for granted the incredible music in the Parks that is constantly present. Music is an integral part of the Disney experience. So why do we miss it? Because the first couple of minutes in a park is usually hectic: bag check, scanning Magic Bands, ten thousand pictures, where’s Timmy?, maps, etc. But if we were to stop and just listen instead, we’d hear something amazing. The main theme for Animal Kingdom is a remarkable score by Richard Bellis, which instantly transports you to a world that is not your own: the animal world. I love this music and have bought the CD to bring the magic with me wherever I go.

You’ll also want to keep an eye out for some of your favorite characters before you even enter the gate. This is something unique to Animal Kingdom itself, actually. No other park has characters that hang out in front of admission. It’s especially cool because this is where you’ll typically see the more rare characters like Flik, Pocahontas, Tarzan, Thumper, Rafiki and Timon. This is an awesome way to start your day that you can basically just stumble upon!

Along with the theme of rushing, when you first walk into Animal Kingdom, you’re usually shuffled along with the rest of the families along the main path to the Tree of Life. This process can actually be a bit stressful, so the remedy of that is to slow down! Let the little family from Iowa run in front of you and hang off to the side of the bridge. Soak in the beautiful views all around you. The Tree of Life is still standing proudly and off to your right is Everest, looking menacing and enticing all at once. This is a great time for pictures with the family, because let’s face it: after a long day of walking around this park the last thing you want to do is pose. So experience these things right away!

I typically cannot go more than five minutes in a Disney park without getting hungry. Luckily, Disney can usually help with that. My favorite quick breakfast snack place is Kusafiri Coffee Shop & Bakery in Africa. It’s right across from Ziwadi Traders, which makes for a beautiful place to chow down. My family tends to get to Animal Kingdom pretty early in the day, so it is absolutely still time for pastries and coffee…and maybe another pastry. I love the elephant ears personally, but my dad likes the cinnamon rolls.

Once we’ve properly digested, or are at least too impatient to keep standing around, we head toward Kilimanjaro Safaris. Conveniently enough, the Safari is right around the corner from Kusafiri. It was a genius layout plan, really. We like to ride the safari early in the day because more animals tend to be out when it’s cooler. Can you blame them? So that’s usually our first attraction at Animal Kingdom. Going later is fine, too, but you risk not seeing the coolest animals, like the lions and cheetahs.

After the Safari, we usually find ourselves wanted to see more animals and wandering down the Gorilla Falls Exploration Trail. This was always my favorite as a kid. I love getting as close to the glass as possible to see just how similar we are to these gentle beasts. The babies are adorable. The other trail you can explore in Animal Kingdom is the Maharajah Jungle Trek in Asia. It’s a bit of a walk from Africa, but it’s worth it. This trek is bigger and more diversely populated. The bat room is so cool, even if it is pretty smelly. Right after the bats are the tigers! The resident tigers can either be seen playing in the water fountain or lounging about from the temple ruins, which are extraordinary on their own.

Snack time! I’m telling you, I can’t last long. Walking around those treks works up an appetite. My personal favorite snack at Animal Kingdom is a frozen banana. I know, I know, you can get them everywhere but for whatever reason I only eat them in Animal Kingdom. Sue me. But keeping cool in this park in particular is incredibly important, so I never feel too guilty… This is also a great snack to eat while doing the next step!

These Animal Kingdom residents are crowd favorites in the park. They live in their own mini paradise in the middle of the Yak and Yeti and Kali River Rapids area. If you get to the park early enough, apparently you can hear them screaming at the world from miles away. There’s a whole little family of these guys that love to hang out together and swing around on all their perches. These quirky creatures are so fun to watch and learn more about, which is really the main point of the park!