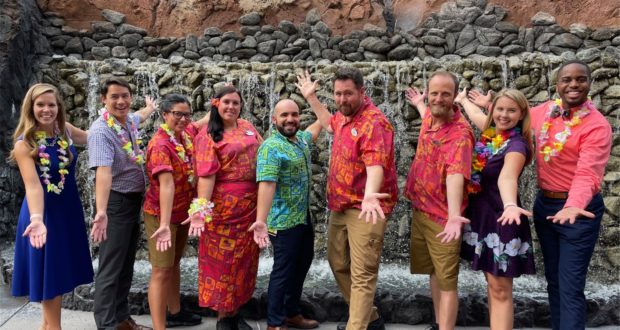 Disney’s Polynesian Village Resort has officially REOPENED! While the resort’s Disney Vacation Club (DVC) Villas have been open to DVC members for some time, the resort remained closed to all guests, until NOW – July 19! Not only can guests now stay in one of the new Moana-themed rooms, but they can also enjoy the reopening of the popular lounge, Trader Sam’s Grog Grotto. Disney Cast Members took to social media to share a view photos as they celebrated the resort reopening.

Disney’s Polynesian Village Resort was among the remaining list of Walt Disney World resorts still left to reopen. With the Polynesian off the list as of July 19, there are six remaining resorts that will reopen by the end of the year. These resorts include: Disney’s Animal Kingdom Lodge & Disney’s Animal Kingdom Villas – Jambo House on August 26; Disney’s All-Star Music Resort on September 16; Disney’s Port Orleans Resort – Riverside on October 14; Disney’s Port Orleans Resort – French Quarter on October 28, and Disney’s All-Star Sports Resort on December 9.

Check out the Cast Member smiles in the photo below at Disney’s Polynesian Village Resort!

And of course, what’s a reopening celebration without a tasty DOLE Whip! Disney celebrated their first ever “DOLE Whip Day” with the reopening of the Polynesian. They even released a list of all current Dole Whip offerings and where to find them! No visit to Disney’s Polynesian Village Resort is complete without a stop at Pineapple Lanai.

Congrats to all the Disney Cast Members on the resort reopening! Disney’s Polynesian Village Resort is one of our personal favorites for many reasons, so we’re thrilled to see if back up and running. Now, we’re curious if Disney is making plans to reopen the popular Disney’s Spirit of Aloha Dinner Show?! Oh how we hope so. In the meantime, Aloha, Disney fans!