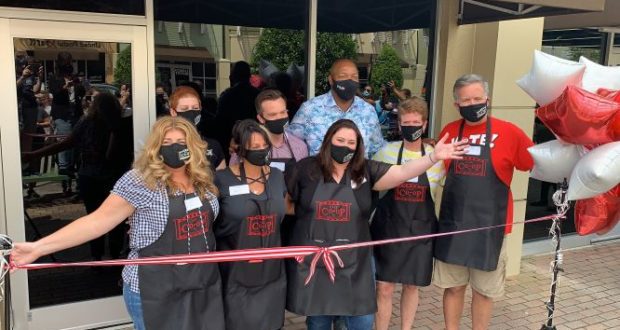 The COVID-19 pandemic hit the hospitality industry hard. We were all shocked when we heard that well over 20,000 Cast Members were either furloughed or laid off from Walt Disney World. Some of those have been called back, but many still are waiting for that call. I live in the Orlando area, and one thing that has me in awe is the resiliency of so many Cast Members. Instead of being bitter, they have continued to make magic; just in other ways.

In the past year there have been many stories of Cast Members who have shown what a special breed they are. Cast Member Pantry has provided food and essential items to those who have been having a hard time putting food on their tables. Cast Member Toy Box made sure that the children of those out of work had a magical Christmas morning. Ear for Each Other is a Facebook group where those who aren’t working can offer their services. For some it’s been a side hustle, but for others it has turned into a new career. There is now another way that Cast Members can sell the items that they have lovingly created. It is Cast Co-op, which is an offshoot of Ear for Each Other.

Cast Co-op Marketplace allows different vendors to show their goods on a rotating basis. You could find baked goods, jewelry, masks, even furniture. So far about 80 different Cast Members are also vendors. Some of the Cast Members are furloughed or laid off, but others have had their hours cut. Other hospitality workers who have been affected are also eligible.

In addition to helping those in need to make money, Cast Co-op assists in other ways. There is food and other essential items available to the furloughed and laid off for free. This includes items for pets. There will also be a small number of financial grants available at some point to help with the bills. This part of Cast Co-op is run by volunteers, and people don’t have to have worked for Disney to be eligible. The entire hospitality industry is hurting, and anyone affected can apply, even if they worked for another theme park, restaurant, or hotel.

I was at Cast Co-op for the ribbon cutting ceremony. There was a feeling of excitement in the air! The indoor space has a flea market feel. Many of the vendors provide custom orders. That means that the items that you see at the booth might not be what you end up with. They are willing to customize for you so that your item will be perfect.

I spoke with several of the vendors in the Cast Co-op Marketplace. There was so much pride among them! I could see why many of them were hired by Walt Disney World to begin with. There were so many interesting projects. Many items are Disney related, but there are other items as well. Not everything was a craft. Some vendors offered home services. There were also lots of baked goods.

Cast Co-op is located at 16744 Cagan Crossing Boulevard in Clermont, Florida. That’s just a few miles away from Walt Disney World. It is currently open Sundays from noon to 5:00, and Wednesdays and Fridays from 10:00-3:00. Cast Co-op is a great way for some Cast Members to be able to continue to make magic, and a way for Disney fans to make magic for these Cast Members as well. If you’d like to help or learn more information, visit the website, which is CastCo-op.com. There you can learn more information, donate, become a sponsor, or apply for help if you think you might be eligible. If you can, include a stop by the Cast Co-op Marketplace on your next trip to Central Florida. (Check the website before heading out because days and hours might change.) You could find something special that you will cherish forever, and you’ll help a Cast Member at the same time. After all, helping each other is its own kind of magic, and that’s what Disney is all about.