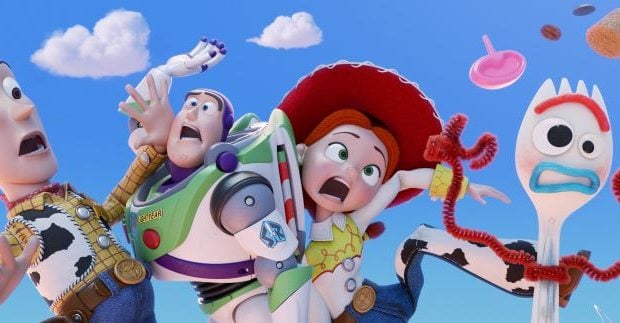 Toy Story 4 does not hit theaters until June 21, but I was lucky enough to be part of a sponsored advanced screening. I’m a huge Toy Story fan, I have been since the first movie came out in 1995. It is hard to believe that these movies have been part of our lives for almost 25 years! A lot of people thought that Toy Story 3 was the perfect way to wrap up the franchise, and did not think that this movie was necessary. I am so glad that Pixar didn’t agree, because this movie is so much fun! It is my favorite in the franchise, and I’m already planning on seeing it again.

The Toy Story movies confirm what we’ve all known since we were children; toys come to life the moment that humans leave the room. The main toys first belonged to Andy, and then they were passed onto Bonnie. In Toy Story 4 Bonnie has a new favorite, a toy that she made that she named Forky (voice of Tom Hale). Forky doesn’t think that he’s a toy, he thinks that he’s trash. Woody (always looking after his kid) takes it upon himself to guard Forky, keep him out of the trash, and convince him that he is now a toy. Tom Hanks once again makes us believe that Woody is real, and we can easily feel his emotions.

Forky is not the only new character in the film. Gabby Gabby is a doll that they meet along the way. Christina Hendricks provides the voice, and she shines in the role. She mixes sweetness and creepiness perfectly. Gabby Gabby is found in an antique store that is filled with nods to other Pixar films. Another new character is Duke Caboom. Keanu Reeves provides the right combination of heart and comic relief to the role.

Annie Potts has returned as the voice of Bo Peep. Bo was absent in Toy Story 3, which is explained in the first few minutes of this movie. Don’t expect the Bo Peep that you last saw in Toy Story 2. She has been through a lot since she was last seen, and she’s toughened up quite a bit. A lot of people have questioned the “white thing” on the arm of the Bo Peep who is currently greeting guests at Disney’s Hollywood Studios. All is explained in the movie.

Toy Story 4 combines comedy, heart, and action seamlessly. Make sure you have some tissues, because you’ll need them. Buzz Lightyear (voice of Tim Allen) has some of his best lines ever. Woody is always the hero. One heartwarming touch to Toy Story 4 is that Don Rickles once again provided the voice of Mr. Potato Head. Rickles passed away before the movie was filmed, and Pixar received permission from his estate to use archived clips of his previous work so that he would be included in the movie. It was also dedicated to the late actor. There is one more thing that I want to say about Toy Story 4. Stay for the closing credits. Don’t stay just until the text starts to run, stay all the way until the end. You’ll be glad that you did.