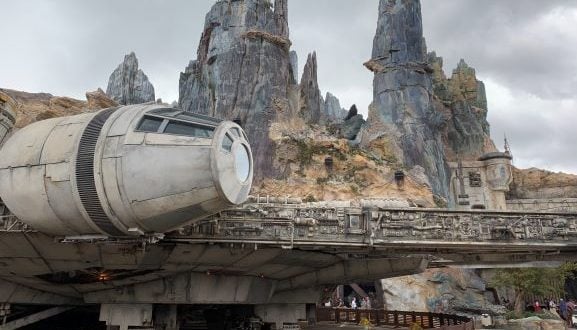 A Few Thoughts About My Passholder Preview of Star Wars: Galaxy’s Edge at Walt Disney World

Star Wars: Galaxy’s Edge does not open until Thursday, August 29, but plenty of people have already enjoyed the new land. Cast Member Previews were held at the beginning of the month, and then Passholder Previews started. In order to qualify for a Passholder Preview, you needed to be a Platinum, Platinum Plus, or Premier Passholder. Spots were gone within three hours after the initial email was sent out.

I was lucky enough to get spots for my adult daughter and myself. On May 31 we visited the California version of Star Wars: Galaxy’s Edge, so we were excited to be able to see the Florida version. My daughter grew up on Star Wars, and I’m one of those super-obsessed fans. We live just a few miles from Walt Disney World, and having a whole land based on Star Wars is beyond comprehension for us.

Our Passholder Preview was on Monday, August 19. We had the 3:00-7:00 time frame, but no one was paying attention to the times. There were no wristbands, and we were in line for Millennium Falcon: Smugglers Run before our 3:00 entry time because they let us in early.

We did not have a reservation for either Oga’s Cantina or Savi’s Workshop. They were already filled when we made our reservation. I’ll be attending the Media Preview for Galaxy’s Edge next week, and hopefully I’ll be able to bring you more information about these popular options then.

Star Wars: Rise of the Resistance does not open until December 5, which means that Smugglers Run is the only ride in the new land. We rode twice. The posted wait for the first ride was 50 minutes, and it was pretty accurate. The second time 55 minutes was posted, but we didn’t wait longer than 30 minutes. There is a single rider line but there are two things to keep in mind about that. First, if you’re hoping to be a pilot that will not happen if you’re a single rider. You’ll be an engineer. Second, if you go single rider you will miss a good part of the queue, and that is half of the fun of the ride.

One more thing about Smugglers Run. Only two people will get to be the pilot. Enjoy whatever position you end up with. I have yet to be a pilot (either in Florida or California) but I still have a blast on the ride. As a lifelong Star Wars fan, I love just being in the cockpit of the fastest hunk of junk in the galaxy. If you’re not a pilot don’t focus so much on your job that you miss the story. It doesn’t matter where you’re sitting, entering Hyperspace is a dream come true.

There were lines for pretty much everything, but they were well managed. We ordered Blue and Green Milk and mixed them, because we had heard that they are better that way. I still prefer the Blue alone. Remember if you buy either milk from the Milk Stand that they are frozen. Don’t picture them as you see them in the movies, because you will be disappointed. Also, don’t drink them too fast or you could get a brain freeze. In Florida, an alcoholic version of either milk is available. You can’t get that at Disneyland.

We had dinner at Docking Bay 7. I was really excited to see this, because I have watched them building it over the wall in Toy Story Land for over a year. The line wasn’t any longer than at any other counter service restaurant at Walt Disney World. It moved quickly, and the service was great.

We stopped by Dok-Ondar’s Den of Antiquities. There was a line to get in. I felt a little bit sorry for the Villagers who were in charge of that line, because it wasn’t obvious that it was there. People (myself included) kept trying to walk right in because it looked like we could. That was another line that moved quickly. You need to stop by Dok-Ondar’s when you visit Galaxy’s Edge. It is filled with interesting items. Not everything is for sale, but all of it is fun.

Marketplace is one of my favorite parts of Galaxy’s Edge. There are several little stores, and the theming is incredible! Even the restrooms fit right in. Make sure that you get a drink of water from the water fountain near the restrooms. There could be a surprise.

There are no characters per say in Galaxy’s Edge, but that doesn’t mean you won’t see familiar faces. These aren’t characters, they’re real. Chewbacca can be seen working on an X-Wing Fighter. Rey could be walking around as well. They hang out in the area where Rise of the Resistance will be, this is the Resistance Camp.

You’ll also find the First Order. There were pairs of Stormtroopers out almost constantly. Kylo Ren was also around, and there was a First Order officer. The Stormtroopers were a lot of fun, they interacted with plenty of guests, including many of the children.

There is one other fun person (I won’t call her a character because I’m suspending disbelief) who you could run into in Galaxy’s Edge. Her name is Vi Moradi, and she’s one of the top spies of the Resistance. You can’t miss her, just look for the woman in the Resistance uniform with blue tips to her hair.

These are some of the highlights of my Passholder Preview of Star Wars: Galaxy’s Edge. The new land opens to the general public on August 29. To guarantee admission, make a reservation for Oga’s Cantina, Droid Depot, or Savi’s Workshop. Starting on September 1, you can also take advantage of Extra, Extra Magic Hours. Disney’s Hollywood Studios will open at 6:00am for those who are staying on property. This benefit will run through November 2, 2019.