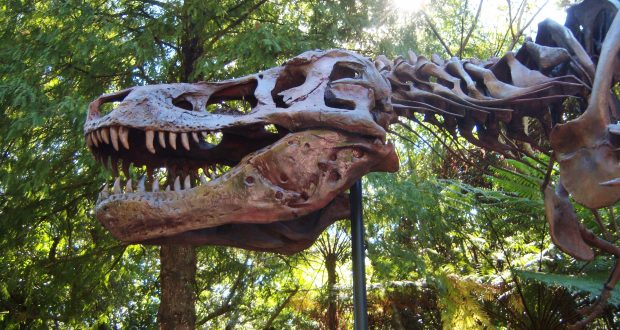 Walt Disney World does a fabulous job of setting the scene for this attraction before guests even arrive at the entrance to Dinosaur.  The area leading to the ride, consisting of serene paths through jungle-like greenery, is populated with several dinosaur statues, some of which guests can actually sit on for photos.  Whether you want to pose with Pachycephalosaurus, gallivant with Gallimimus, or roar with raptors, there’s a fun photo op for every member of your party!  It’s also a great way to kill time waiting for a FastPass+.

Dinosaur initially opened as a ride called “Countdown to Extinction”, the same year that Animal Kingdom opened, in 1998.  After the movie “Dinosaur” was released in 2000, the ride’s name was changed, along with some details in the attraction itself.  But guests with sharp eyes will be able to spot some tantalizing evidence of the ride’s former life.  When you’re in the loading area, look for a wall that reads “SECTOR CTX-WDW-AK98”.  This is the Imagineers’ homage to the ride’s previous name (CTX), Walt Disney World (WDW), and the year the park opened (AK98).

Dinosaur is typically the first ride we head for upon arriving at Animal Kingdom, to beat the crowds.  But there’s so much to see during the ride’s queue that we end up wishing for a line.  You’ll encounter fossil exhibits, life-size casts of various dinosaurs, prehistoric skulls, and of course, the towering Carnotaurus skeleton.  There’s detailed information on the exhibits, and expansive murals and dioramas of prehistoric life.  So even if you can’t ride first thing in the morning, or don’t have a FastPass+, don’t worry – kids and adults alike will be thoroughly entertained while waiting for their Dinosaur adventure!

Disney’s Dinosaur has to be one of our favorites for pre-show star power alone.  Wallace Langham (technician Hodges in CSI) is the Dino Institute staff member who dismantles your vehicle’s safety protocols and sends you on your mission, while the iconic Phylicia Rashad (Clair Huxtable in The Cosby Show), as Dr. Marsh, prepares you for your journey through time.  And then there’s Bill Nye (AKA “The Science Guy”), who appears during the queue to set the tone for your adventure, narrating the theory of the extinction of the dinosaurs.

4. Chased by a Carnotaurus

You’ll encounter the ride’s scariest dinosaur, the Carnotaurus, several times during Dinosaur.  A huge, roaring, spiky carnivore with a head full of horns, he is made even more terrifying by strobe effects.  Disney used advanced audio-animatronics to make the Carnotaurus seem absolutely real, and trust us, you will have no doubt that he is!  The scariest encounter is at the end of the ride, when the Carnotaurus lunges directly at your vehicle, and it’s not clear if you’ll make it back to the present.  It’s one of our top terrifying moments in Walt Disney World.  We dare you to keep your eyes open for the whole ride (your ride photos will tell the truth!).

As an adult dinosaur fan, it can be difficult to find dinosaur-themed merchandise not geared towards children.  The Dino Institute Shop is perfect for dino lovers of all ages.  You’ll find toys of the dinosaurs featured in the ride, excavation kits, apparel for men, women and children (including a Carnotaurus-shaped hat I couldn’t resist that has since proven quite a conversation starter), books on prehistoric times, posters, gems, and more.  Take a minute to read the cartoons on the tees (a t-rex taking a selfie with a meteor in the background; another t-rex claiming “I’m lover, not a biter”) and maybe find the perfect gift for the dino lover in your life!

The attraction closed for a couple of months recently for some much-deserved refurbishment (almost 20 years of time travel and dino-hunting can wreak havoc on a ride!).  Frequent riders will now notice it’s much easier to take photos during the attraction.  New lighting effects make for more impressive volcano and lightning scenes.  The deterioration of the aging animatronics has been addressed, and the dinosaurs have been retouched and upgraded to look even more realistic, enhancing your trip through the Cretaceous.

1. The Dino is in the Details

As with any Walt Disney World ride, it’s the details that really make a difference in Dinosaur.  Next time you ride, pay attention when Carnotaurus roars at you – you’ll notice that the entire vehicle shakes.  In fact, guests are shaken or bumped around quite a lot on Dinosaur, including over the neck of a sauropod; watch for her dirty look, and, if you’re in the back two rows, wait for the bumps she’ll give you in return.  Finally, look at the yellow, red and white pipes above the loading area; budding chemists will know that the characters on the pipes are the chemical makeup for mustard, ketchup and mayonnaise (perhaps a nod to the fast food chain that originally sponsored the ride?).