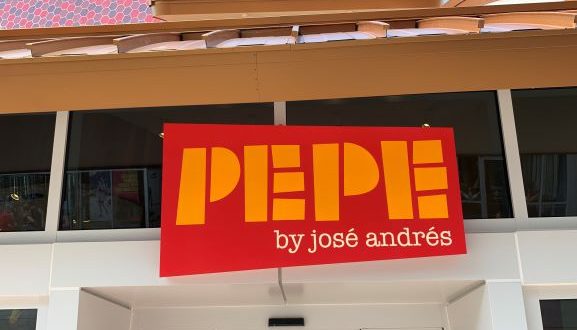 There’s a new hot spot at Disney Springs and it’s already very popular among Guests and visitors to the dining, entertainment and shopping district at the Walt Disney World Resort in Florida. On March 17, 2019, Pepe’ by Jose Andres welcomed its first patrons through the doors. And just like a similar hotspot  location in Washington, D. C., this place is already very popular—especially among those with an affinity for sandwiches—hot and cold, gazpacho, sangria and soft-serve. Have you tried it yet? If not, here are 8 things we think you’re going to love about it!

You’ve probably heard the name “Jose Andres,” but if you’re not entirely familiar with the brains behind the Pepe’ place, let us introduce you! Jose Andres was born in Mieres, Spain, in 1969. He’s a Spanish-American chef—an uber popular, phenomenal chef—who is credited with bringing the idea of small-plates dining to the States. Andres owns restaurants in Washington, D. C., Los Angeles, Las Vegas, South Beach, Florida, Frisco, Texas, Mexico City and Dorado, Puerto Rico. (We suppose it was high time he became part of the fabulous Disney Springs sector!)

Andres is the founder of the non-profit organization World Central Kitchen, which provides meals to people who’ve been affected by natural disasters. He was awarded a National Humanities Medal during a White House ceremony for his work. He brings the flavors of Spain to Disney Springs at Pepe’.

7. It’s the offshoot of an amazing spot in Washington, D. C.

Pepe’ by Jose Andres is the first-ever “brick-and-mortar” take on Andres’ Spanish food truck located in Washington, D. C., that has been wildly popular for over six years. Think of it as a permanent food truck. Minus the food truck.

If you’re in the mood for a sandwich, but you’re not feeling the traditional ham on rye, stop in at Pepe’ by Jose Andres. The menu is available for lunch and dinner and is chock-full of sandwiches. The B.E.L.T. (bacon, egg, lettuce and tomato) is served on a traditional Spanish bread called pan de Cristal, which is thin and crunchy. Not into breakfast-type sandwiches but want to try the pan de Cristal? No worries—try the Bocata de Vegetales served with roasted peppers, onion, asparagus, eggplant, spinach and cheese. The Pepito Ternera is a flat iron steak sandwich with caramelized onions, cheese and mayo, also served on the delightful Spanish bread.

Pepe’ by Jose Andres also serves a variety of pressed sandwiches, called bikinis—but don’t let the thinness of these sandwiches fool you! They’re full of the good stuff! The Bikini de Jamon is a pressed ham and cheese sandwich. The Bikini Quatros Quesos—true to its name—boasts four different cheeses melting together in a pressed sandwich sure to have you coming back for more!

Not up for the pan de Cristal or bikini variety of sandwich? Never fear! Jose Andres is here! And he’s created a delicious take on some sandwich favorites. There’s a fried chicken breast sandwich with crunchy peppers and brava sauce, a tuna sandwich with a Spanish flair, a traditional hot dog and the Futbol Club Barcelona with sliced chicken, bacon, lettuce, tomato, onion and mayo. The Rusa is made with beet salad, peas, carrots, egg and more. Hey, to each his own, right?

3. Sides with those sandwiches

Now the question: what side would you like with that sandwich? You’ve got lots of choices at Pepe’ by Jose Andres. Choose patatas bravas—potato chips served with aioli and brava sauce or straight-up potato chips. Choices also include seasonal fruit, gazpacho—a cold soup made with tomatoes, cucumber and peppers—and tortas de aceite, which are thin crispy, just-the-right-amount-of-sweet biscuits shaped like tortillas.

Pepe’ by Jose Andres also serves varying flavors of soft-serve. And just for good measure, the menu also includes sangria by the glass, wine by the glass and beer.

Find Pepe’ by Jose Andres at Disney Springs’ West Side adjacent to Andres’ other restaurant, Jaleo. When you get there, you’ll be able to order at the register, or a friendly Cast Member with a shiny iPad will take your order when you first walk in—it’s up to you!