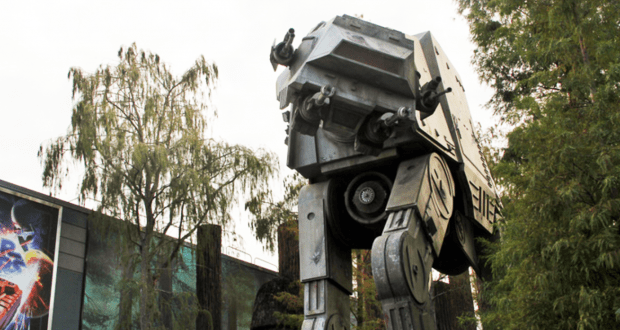 8 Facts and Secrets About Star Tours – The Adventures Continue

Star Tours – The Adventures Continue is a 3D motion simulator ride that is based on the popular Star Wars franchise. It is located in the Echo Lake area of Disney’s Hollywood Studios. The current ride opened on May 20, 2011, replacing the original Star Tours. George Lucas was involved with developing the concept for the ride, and was at the park when it officially opened. In December, 2016 the ride was updated again, this time to include a scene and characters from Star Wars: The Force Awakens. There are four parts to the ride; an opening scene where the Rebel Spy is revealed, a quick trip to get away from the bad guys, a Star Wars character giving instructions on where to take the Rebel Spy, and the final leg of the journey to get the spy to his or her destination. C-3PO is your pilot (he’s in the pilot’s seat by mistake), and R2-D2 is along to help. Before the update there were 54 ride combinations, now the number of possibilities is much higher. Here are eight things that you may not know about Star Tours – The Adventures Continue, from someone who has ridden it well over 200 times. For the most part they’re in chronological order.

Since there are so many different worlds to explore, you will probably want to ride more than once. Fortunately the Star Tours line moves quickly, and the queue will thrill most Star Wars fans. The lines for Star Tours are usually short at the beginning of the day. That’s because many other guests will jump immediately into line for a Tier One FastPass+ attraction that they couldn’t get. (Star Tours is Tier Two, and fairly easy to grab a FastPass+ for.) The lines are also usually short towards the end of the night. If you’re there during the middle of the day, try when Jedi Training: Trials of the Temple is going on. The worst time to get in line is when that show ends, because it’s a short walk to the Star Tours standby line.

7. Throwbacks to the Original

The original Star Tours was much loved, but dated. In true Disney tradition, there are some throwbacks to the first version of the ride. One is when you enter the indoor queue. C-3PO and R2-D2 are by the Starspeeder 1000, which is the name of the ship that you’re taking on your journey. The ship in the original Star Tours was the Starspeeder 3000. Another throwback you’ll find around the corner when you enter the next room. There are several droids lining the left hand side. Almost immediately you’ll see a droid marked “Defective! Return to factory!”. That’s RX-24, or Rex. He was the pilot (if you can use that word) in the original Star Tours. Rex was voiced by Paul Reubens, and if you listen you will hear the current version say a few broken lines.

Look straight ahead and up after you’ve walked past Rex. There is a window that shows the shadows of travelers. Watch that for a minute or two and you’ll see some familiar figures. You might also see a Hidden Mickey; courtesy of an R2 unit.

There are two droids who are working who you’ll encounter as you wind your way through the line. The first is G2-9T. He’s scanning passengers’ baggage. Stop and pay attention to him for a little while. Not only is he hilarious, but there are also some great nods to Disney favorites hidden within the bags. Tom Fitzgerald provided the voice of G2-9T. The second droid, G2-4T, is scanning passengers as they go by. You’ll be able to see the scans, but the picture is changed so that it’s hard to tell who is who. Pay attention to G2-4T as well, he has some funny lines and the voice might sound familiar. That’s Patrick Warburton. He might be best known as Puddy from Seinfeld, but to Disney fans he’ll always be Chief Flight Attendant Patrick from Soarin’.

Like many rides, there is a short video with safety announcements before you board. The name of the animated droid is Aly San San. George Lucas gave her that name when he learned that the voice was provided by actress Alison Janney, he thought that it fit. Pay attention to the part of the video where the seat belt is demonstrated. A young girl in a blue dress is seen seated between two women. After the ride is over there is a short video that has the two women, but the girl is nowhere around. One of the women is sitting in the girl’s seat. Maybe she got scared and took off in an escape pod.

One of the main questions that fans of the ride have is how to be picked as the Rebel Spy. There seems to be no real formula, but there are things that you can do to increase your chances. Some Cast Members will tell you that the selection is random, but that is not the case. The Rebel Spy is picked by the Cast Member at the ride’s entrance, so be nice to that person (you should always be nice to Cast Members). Chat it up, but don’t mention that you want to be the Rebel Spy. A conversation about the weather, the CM’s hometown, or how his or her day is going will increase your chances. Second, once seated do not put on your flight (3D) glasses until you’re instructed. Wearing the glasses when the picture is taken will disqualify you. Third, after you buckle your seat belt look straight ahead but casual. If you’ve ridden several times and still haven’t been picked, check the line at the end of the night. If the wait is short and the starspeeders aren’t filled, you will have a better chance.

During your ride you will see plenty of familiar faces. You could encounter Darth Vader, Boba Fett, Admiral Akbar, Chewbacca, Jar Jar Binks, Yoda, Princess Leia, Sulbulba, BB-8, or Finn. If your opening scene includes the Millennium Falcon and you squint you might notice that Han Solo is trying to talk his way out of another mess. Many Star Wars actors reprised their roles, including Anthony Daniels, Carrie Fisher, James Earl Jones, Frank Oz, John Boyega, and Tom Kane.

It’s fairly well known that a new scene featuring Jakku and an encounter with BB-8 were added right before the release of Star Wars: The Force Awakens. What many guests do not realize is that there were tweaks in some of the other scenes as well. For example, the opening scene featuring Darth Vader now may or may not include Boba Fett. There are now at least three different versions of the closing scene on Naboo. These minor changes, as well as the possibility of going to even more planets (Mustafar, anyone?) will keep the ride fresh for years to come. Since the Star Wars franchise is hotter than ever and it just keeps growing, the possibilities are endless.